Dear Quote Investigator: Multiple books and websites attribute the following quotation to the influential economic thinker Adam Smith, but I think the ascription is incorrect:

As soon as government management begins it upsets the natural equilibrium of industrial relations, and each interference only requires further bureaucratic control until the end is the tyranny of the totalitarian state.

Usually these words are assigned to the landmark 1775 text “The Wealth of Nations”, but I have carefully searched electronic copies of this work and concluded that the quote is absent. Furthermore, the vocabulary in the passage is chronologically incongruous. The word “totalitarian” first entered the English language only in the 1920s, and that is more than 130 years after the death of Adam Smith in 1790. Could you trace this quote to identify its true origin?

Quote Investigator: Thanks to the questioner for the perceptive analysis accompanying the query. The passage above was not written by Adam Smith. It first appeared in a 1939 essay by Everett Dean Martin who was a Professor of Social Philosophy at Claremont Colleges in California. The statement was Martin’s summary analysis of Adam Smith’s economic philosophy. Martin used his own words, and he did not claim that he was quoting Smith.

Adam Smith, whose book, “The Wealth of Nations,” was written the same year as our Declaration of Independence, pointed out the moral and economic significance of Locke’s political philosophy. Individual responsibility is the very goal and meaning of free government. There must be no bureaucratic management of affairs which men had best decide for themselves.

The following excerpt from Martin’s paper included the passage being traced:

He held that not only is government incompetent to regulate by decree or by grant the affairs of individuals, but its meddling inevitably results in putting a premium on inefficiency. As soon as government management begins it upsets the natural equilibrium of industrial relations, and each interference only requires further bureaucratic control until the end is the tyranny of the totalitarian state.

The final sentence above was later reassigned directly to Adam Smith. This misattribution has been widely disseminated, and today it is present in several quotation databases.

Here are additional comments and selected citations in chronological order.

The sentence was considered worthy of emphasis in the 1939 paper. The words were presented as a lift-out quote inside a special display box. The prefatory descriptive phrase warned that the words between quotation marks were not a direct quote: 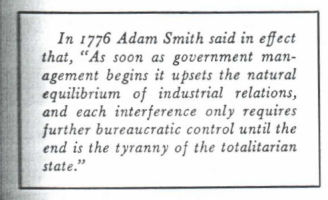 What happened next reflects a common mechanism for the creation of inaccurate quotations. Someone ignored the warning. A statement written by person X that was supposed to present an interpretation or summary of the viewpoint of person Y was later reassigned directly to person Y. The identity of person X, the actual creator of the quotation, was then forgotten. Here X is Everett Dean Martin and Y is Adam Smith.

If the reader wishes to see another example of this mechanism in operation he may visit this webpage which discusses a popular quote that is incorrectly attached to George Orwell: People sleep peaceably in their beds at night only because rough men stand ready to do violence on their behalf.

In 1976 the CEO of a top brokerage firm writing in “Financial Executive” magazine employed the quotation and stated that it could be found in Smith’s famous opus. The phrasing of the last nine words was slightly altered:[3]1976 July, Financial Executive, “Wall Street, the government and the investor” by James W. Davant (Chairman and Chief Executive Officer Paine Webber Incorporated), Start Page 70, Quote … Continue reading

The real problem is government itself. Adam Smith, the intellectual godfather of free enterprise, described this problem in The Wealth of Nations. He wrote: “As soon as government management begins, it upsets the natural equilibrium of industrial relations, and each interference only requires further bureaucratic control until there is the tyranny of the totalitarian state.”

The leading reference work The Oxford English Dictionary has an entry for the word “totalitarian” which can function as an adjective and a noun. The first citation for the adjective is from 1926, and the noun appeared later.[5]Entry for “totalitarian”, adjective and noun, Oxford English Dictionary, Online Version. (OED Note: This entry has not yet been fully updated (first published 1986)) (Accessed at oed.com … Continue reading Future research may be able to push these dates back a few years. But Adam Smith died in 1790; hence, the word “totalitarian” would be prochronistic within a saying attributed to Smith.

In conclusion, the statement supplied by the questioner should properly be credited to Everett Dean Martin who was presenting his conception of Smith’s ideas. The words should not be ascribed to Smith himself.

(Great thanks to Gradivus Graham who asked about this quotation while noting that the word totalitarian was not used in the English language until the 1920s. Graham also determined that the statement was not present in “The Wealth of Nations”. QI constructed the question based on Graham’s query. Special thanks to Dennis Lien for scans of the November 1939 citation.)