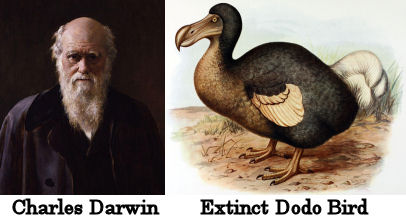 The scholars working on the “Darwin Correspondence Project” based at Cambridge University have considerable expertise concerning the words of Darwin. They have constructed an important database of 7,500 letters written or received by Charles Darwin. An article on the project website places the statement under investigation into a set of “Six things Darwin never said”.[1]Website: Darwin Correspondence Project, Article title: Six things Darwin never said – and one he did, Date of article on website: No date is specified, Internet Archive Wayback Machine date: … Continue reading

The earliest relevant evidence known to QI appeared in a speech delivered in 1963 by a Louisiana State University business professor named Leon C. Megginson at the convention of the Southwestern Social Science Association. The text of his address was published in the quarterly journal of the association. Megginson presented his own idiosyncratic interpretation of the central idea outlined in Darwin’s “On the Origin of Species”. Megginson did not use quotation marks, and the phrasing was somewhat repetitive. Boldface has been added to excerpts:[2]1963 June, Southwestern Social Science Quarterly, Volume 44, Number 1, Lessons from Europe for American Business by Leon C. Megginson, (Presidential address delivered at the Southwestern Social … Continue reading

In 1964 Megginson published an article in the journal “Petroleum Management”, and the beginning sentences of the piece were very similar to the passage about Darwin in the 1963 speech. Megginson did not use quotation marks, but he did use the phrase “so says Charles Darwin”. The ellipsis was present in the original text:[3]1964, Petroleum Management, Volume 36, Number 1, Key to Competition is Management by Leon C. Megginson, Start Page 91, Quote Page 91, Petroleum Engineer Publishing Company, Dallas, Texas. (This … Continue reading

In 1982 a textbook about the challenges of international management titled “Managing Cultural Synergy” included a version of the quote credited to Darwin in a section about negotiation. The phrasing was identical to the instance in 1968 except for two small changes: the word “of” was deleted, and the word “and” was replaced by “or”.[5] 1982, Managing Cultural Synergy, by Robert T Moran and Philip R Harris, The International Management Productivity Series, Quote Page 94, Gulf Publishing Company, Houston, Texas. (Verified on paper)

In 1983 a monograph was published by Harvard University’s Asia Center titled “China and Charles Darwin”. The author discussed the interpretation and misinterpretation of Darwin’s ideas by reformers and revolutionaries in China in the late 1800s and early 1900s. A concise adage emphasizing adaptability was presented, but quotation marks were not used, and the words were not directly attributed to Darwin:[6]1983, China and Charles Darwin by James Reeve Pusey, Series: Harvard East Asian Monographs, Quote Page 145, Published by Harvard University Asia Center, Cambridge, Massachusetts, Distributed by … Continue reading

I Nai’s argument for complete Westernization was actually a Taoist-Darwinian program for survival. The fittest was not the strongest, but the most adaptable.

In 1985 the magazine “Bankers Monthly” published a quotation ascribed to Darwin. The statement was a simplified and shortened version of the 1982 instance with the phrase “most intellectual” deleted:[7]1985 September 15, Bankers Monthly: The Nation’s Oldest Continuously Published Magazine for Bankers, Volume 102, Number 9, Back to Cash Equity in Real Estate Finance by Terry Glasscock, Start … Continue reading

Whether we speak of lenders or developers, it is helpful to recall a statement by Darwin, “It is not the strongest of the species that survives, but rather, that which is most adaptable to change.”

In 1987 an individual providing testimony at a committee hearing of the U.S. Congress employed an instance of the saying and oddly credited the words to the prominent lawyer Clarence Darrow. The expression was a simplified and shortened restatement of the 1982 instance with the phrase “most intellectual” replaced by “most intelligent”:[8]1988, Congressional Hearing before the Select Committee on Aging, House of Representatives, One Hundredth Congress, First Session, Hearing title: Improving the Quality of Life for the Black Elderly: … Continue reading

To be the first of anything simply means you are a symbol of something greater to follow. Clarence Darrow once said, “It is not the strongest of the species that survives, nor the most intelligent, but rather the one most adaptable to change.”

“It is not the strongest of the species that survives, nor the most intelligent; it is the one most adaptable to change.”
— Charles Darwin, British naturalist.

In 2008 John van Wyhe, a science historian at the University of Cambridge, wrote an article in “The Guardian” newspaper that included a discussion of statements misattributed to Darwin:[10] 2008 February 8, The Guardian, “It ain’t necessarily so …” by John van Wyhe, Guardian News and Media Limited, London. (Accessed theguardian.com on May 4, 2014) link

There are many attributed to Darwin. Probably the most common is: “It is not the strongest species that survive, nor the most intelligent, but the ones most responsive to change.” Versions of this catchy phrase adorn many a book and website. But it was never written by Darwin. There is no longer any excuse for taking someone else’s word about or misquoting Darwin, because all of his publications are available for free at darwin-online.org.uk.

In 2009 Nick Matzke, a graduate student in biology, investigated the source of this saying, and he located the key citations dated 1963, 1964, and 1982 which were detailed previously in this article. The “Darwin Correspondence Project” presented Matzke with an award for helping to explicate the provenance of this expression.[11]Website: Panda’s Thumb, Article title: Survival of the Pithiest, Article author: Nick Matzke, Date on website: September 3, 2009, Website description: Articles and forum on the topic of … Continue reading

In conclusion, in 1963 Leon C. Megginson delivered a speech that contained a passage presenting his interpretation of Charles Darwin’s ideas. Megginson did not claim that he was quoting the words of Darwin. Nevertheless, over time, in a multistep process this passage has been simplified, shortened, altered, and reassigned directly to Darwin.

Images Notes: Detail of portrait of Charles Darwin circa 1883 by John Collier. Depiction of the Dodo by Frederick William Frohawk. Plate 24 from Extinct Birds (1907) by Walter Rothschild. Both files obtained via Wikimedia Commons.

(Special thanks to Edward Carilli and Lauren Foster whose inquires led QI to formulate this question and perform this exploration. Great thanks to the kind librarian at the John C. Hitt Library of the University of Central Florida.)