Dear Quote Investigator: Many people are unable to find countries and major cities on a map. A comical remark about this cartographical ignorance has been attributed to both Ambrose Bierce and Mark Twain. Here are four versions:

I searched in Bierce’s “The Devil’s Dictionary” and Twain’s novels and was unable to find the saying. No one seems to have concrete information about the source. Comic Jon Stewart is sometimes credited. Would you be willing to trace this statement?

Quote Investigator: QI and other researchers have located no substantive evidence that Ambrose Bierce or Mark Twain spoke or wrote this quip. The expression is part of a family of remarks and jokes that has been evolving since the 1800s.

In 1879 the periodical “Rose-Belford’s Canadian Monthly” printed a table listing numerous ports in Central and South America. The article claimed that readers would learn new geographical facts while following stories about warfare. The tone of this precursor observation was not humorous. Boldface has been added to excerpts:[1]1879 August, Rose-Belford’s Canadian Monthly and National Review, Volume 3, The Seat of the War in South America by J. Douglas Jr. (late of Quebec), Start Page 113, Quote Page 119, Rose-Belford … Continue reading

The following list of ports of call between Panama and Valparaiso contains the name of every important point on the coast, and gives the relative positions of many places which, if the war continues, will become familiar, for whatever evil war brings in its train, it has value in teaching us geography.

Remarks of this type appeared in publications in Canada, France, the United Kingdom and the United States. By the 1920s instances with a clearly sardonic tone were in circulation. In 1987 the comedian Paul Rodriguez told a joke during a Comic Relief concert that closely matched the one given by the questioner. Detailed examples with cites are presented further below.

Top researchers Ralph Keyes[2] 2006, The Quote Verifier by Ralph Keyes, Page 240 and 338, St Martin’s Griffin, New York. (Verified on paper) and Barry Popik[3]Website: The Big Apple, Article title: “War is God’s way of teaching Americans geography”, Date on website: December 05, 2012, Website description: Etymological dictionary with more … Continue reading have also examined this saying and some of their findings have been incorporated in this article.

FROM THE NILE TO THE CONGO.

Foremost among the countless blessings of war is its power of teaching geography. The Egyptian conflict and the Soudan rebellion, while undeniably causing vast bloodshed and misery, have nevertheless brought out a great many maps and familiarized the world with East Africa.

In 1917 “The New York Times” company published a current history book that reprinted a cartoon from the Paris magazine “La Vie Parisienne”. The cartoon depicted a woman moving small national flags on a wall-map of Europe. The caption alluded to the death and injury of loved ones during the war:[5]1917, The New York Times Current History: The European War, Volume III: April to June, 1915, (French Cartoon from La Vie Parisienne, Paris) Our Colors Advance!, Quote Page 529, New York Times … Continue reading 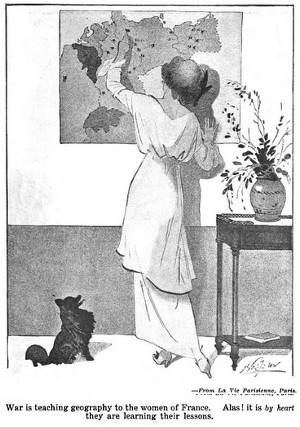 War is teaching geography to the women of France. Alas! it is by heart they are learning their lessons.

Certainly the war is teaching geography to the world. The ignorance of the world’s inhabitants regarding the earth on which they live is among the strangest phenomena of the human race.

Wars should be stopped. At the same time they have their good points. How many of you reading this essay would have known whether Bolivia and Paraguay were in South America or at the North Pole if it hadn’t been for the recent war scare? Think how much happier you are now that you know Paraguay is on top of the Alps—or is it the Alps? Anyhow, geography makes us all better men and women. And war teaches us geography. Gittup!

Wars do some good, but they are a rather expensive way to teach Americans geography.

Think of all those poor fellows dying over there just to teach Americans a little geography.

In 1987 the “Los Angeles Times” published some backstage notes about the Comic Relief concert broadcast by the HBO cable network. A joke by the comedian Paul Rodriguez caught the attention of the reporter who reprinted it in the article. This was the earliest close match to the popular modern jibe known to QI:[12]1987 November 16, Los Angeles Times, Comic Relief: An HBO Tradition: Comedians Weave Laughter Into Plea for Homeless at Amphitheatre by Lawrence Christon, Start Page G1, Quote Page G7, Los Angeles, … Continue reading

Paul Rodriguez got up to say “War is God’s way of teaching us geography.”

You know we live in such a pathetic world. It seems as if every year or so there’s another new war breaking out somewhere. There was war in Sri Lanka. War in Beruit. War in Yugoslavia. In Croatia.

Sometimes I think war is God’s way of teaching us geography.

By 2001 the jape had been reassigned to the prominent humorist Ambrose Bierce. For example, in 2001 the “Los Angeles Times” published a commentary by Larry Minear who was the director of the Humanitarianism and War Project at Tufts University. Minear recounted the quip and credited Bierce:[15] 2001 October 9, Los Angeles Times, Commentary; Our Do-Gooder Delusions in Afghanistan Are in for a Shock by Larry Minear, Quote Page B11, Los Angeles, California. (ProQuest)

If, as American writer Ambrose Bierce is said to have observed, “war is God’s way of teaching Americans geography,” Sept. 11 represents a wake-up call.

Yes, there have been a few enjoyable things in the news in recent days. How about this quote from the L.A. Times op-ed page, one attributed to Ambrose Bierce: “War is God’s way of teaching Americans geography.”

In 2012 the industrious quotation compiler Robert Byrne included an instance in “2,548 Wittiest Things Anybody Ever Said”. The saying emblazoned on the back cover was ascribed to a well-known television comedian:[17] 2012, 2,548 Wittiest Things Anybody Ever Said by Robert Byrne, (Quote appears on back cover), Touchstone: A division of Simon & Schuster, New York. (Amazon Look Inside)

In 2013 the saying was attributed to Mark Twain by the columnist Liz Smith:[18] 2013 August 31, The Palm Beach Post, Is Lamar Odom on drugs or is this a Kardashian ploy by Liz Smith, Quote Page D2, Column 1,West Palm Beach, Florida. (Newspapers_com)

In conclusion, this quip began as a non-humorous comment about war and evolved into a satirical jibe. Early comical instances have no clear originator. The prevalent modern form of the joke that mentions God should be credited to Paul Rodriguez based on current evidence. The linkages to Ambrose Bierce and Mark Twain are unsupported.

Image Notes: Early world map by cartographer Abraham Ortelius via Library of Congress and Wikimedia Commons. Paul Rodriguez during a show for the United Services Organization (USO) in 2003 via Wikimedia Commons.

(Great thanks to Daniel Gackle whose query led QI to formulate this question and perform this exploration. Special thanks to Professor Jonathan Lighter who raised this topic on a mailing list and noted that the expression was not contained in “The Devil’s Dictionary”. In addition, thanks to Ralph Keyes and Barry Popik for their valuable research efforts.)