Dear Quote Investigator: The notable wit Dorothy Parker was also known as an imbiber. She would sometimes generously buy a round of drinks for her companions using the phrase:

This is on me.

Quote Investigator: QI plans to examine at least five different epitaphs that have been attributed to Dorothy Parker. Here is a link to a webpage that will have pointers to the five separate analyses when they are completed.

Dorothy Parker died in 1967, and books published in 1968 and 1970 asserted that Parker mentioned this expression as a possible humorous epitaph. Detailed citations are given further below. Nevertheless, the words did not appear on the marker above her ashes. The actual commemorative statement can be read near the end of this article.

This joke has a long history and instances have been circulating for more than one hundred years. For example, in July 1896 the humor magazine “Life” printed a comical dialog about a grave marker. The term “soaker” referred to a heavy drinker. Boldface has been added to excerpts:[1] 1896 July 16, Life, Volume 28, Issue 707, (Short untitled item), Quote Page 572, Column 3, Published by Life Office, New York. (ProQuest)

BRIGGS. That was rather an appropriate inscription they put on Soaker’s tombstone.
GRIGGS: What was it?
“‘This is on me.'”

Dorothy Parker was born in 1893; therefore, barring preternatural precocity, she did not craft this quip though she may have employed it.

…my condition is somewhat like the inscription on a tombstone erected in London, over the grave of a jolly good fellow, who was more or less given to his cups, and the inscription read — “This is on me!”

I find myself in the position of a jolly good fellow who was a member of an English club. He died early in life, on account of his habits. He had a great habit of treating everybody, and he always insisted on treating when people would allow him, and at last he treated himself into his grave. He had a very touching tombstone. It lay flat upon the ground, and had upon it his name, and then the words, “This is on me.” (Applause) 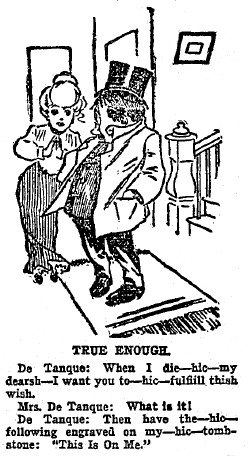 In 1903 a comic depicted an inebriated character named “De Tanque” who was trying to communicate to his wife the engraved message he wished to use to memorialize his life:[4] 1903 January 25, Los Angeles Times, Comic: True Enough, Quote Page D11, Column 2, Los Angeles, California. (ProQuest)

Mrs. De Tanque: What is it!

De Tanque: Then have the—hic—following engraved on my—hic—tombstone: “This Is On Me.”

Don C. Seitz relates the story of a gentleman of economical tendency who was always willing to accept the hospitality of others, but never offered any himself. When he died his acquaintances placed a monument upon his grave with this inscription: “This is on me.”

In 1929 the story of the clever epitaph moved from the world of fiction to the domain of non-fiction. The Associated Press reported that a medical doctor had commissioned a humorously engraved tombstone in advance:[6] 1929 September 22, The Hartford Courant, ‘This Is on Me,’ Tombstone Legend, Quote Page 1, Column 4, Hartford, Connecticut. (ProQuest)[7] 1929 September 23, New York Times, “This Is on Me,” Cut in Stone, Will Recall a Generous Host, Quote Page 29, Column 2, New York. (ProQuest)

“This is on me” is the inscription Dr. William P. Rothwell, local physician, has had cut into the large boulder which will be placed over his grave.

Known as an ever-generous host, Dr. Rothwell has said, “This is on me,” so many times while paying the check that he wants it to be his last word. When he is gone, he says, he desires no mourning among his friends, and he thinks the familiar words on his gravestone will bring smiles instead of sorrow.

In 1968 a book about the Algonquin Round Table titled “The Algonquin Wits” claimed that Dorothy Parker mentioned the inscription:[8] 1968, The Algonquin Wits, Edited by Robert E. Drennan, Quote Page 125, Citadel Press, New York. (Verified on paper)

Dorothy Parker once requested that her epitaph read: “Excuse my dust.” Later she suggested another reading: “This is on me.”

“Mr. Benchley and I subscribed to two undertaking magazines: The Casket and Sunnyside,” Mrs. Parker said. . . .

Death could be funny, the funniest thing about it being the world’s fear of it. She amused Mr. Benchley by thinking up epitaphs to embellish her own tombstone, such as “This is on me,” “Excuse my dust,” and “If you can read this, you are standing too close.”

In conclusion, this comical epitaph was already circulating by 1896; hence, Dorothy Parker did not originate it. Yet, there is some evidence that Parker placed the quip within the set of multiple epitaphs she suggested for herself.