Dear Quote Investigator: According to legend when Abraham Lincoln was served a cup of unpalatable brew he made the following hilarious remark:

I have not been able to find a solid citation for this saying. Are these really the words of Old Abe?

Dear Quote Investigator: The earliest instance of this quip known to QI appeared in January 1840 in the “Madison Courier” of Madison, Indiana. The speaker was an unidentified “distinguished citizen of North Carolina”. Boldface has been added to excerpts:[1] 1840 January 18, Madison Courier, (Short untitled item), Quote Page 1, Column 6, Madison, Indiana. (NewspaperArchive)

It is said, that once, on an occasion when a distinguished citizen of North Carolina, was disgusted by the taste of some beverage or other which was placed before him at a public table to answer the place of coffee or tea, he exclaimed, ‘boy! if this is tea bring me coffee, and if it is coffee bring me tea.’

By 1852 the witticism had been assigned to a Congressman from Virginia with the moniker John Randolph of Roanoke. This ascription became common, but the supporting evidence was weak because Randolph had died many years earlier in 1833.

Special thanks to the fine researcher Barry Popik who located the January 1840 citation and the earliest citation crediting John Randolph. Popik’s webpage on this topic is located here.

By 1902 the remark had been re-assigned to the famous statesman Abraham Lincoln who died in 1865. Nowadays, this unlikely ascription has become prevalent. It is true that the joke was circulating while Lincoln was alive; thus, it was conceivable he employed it; however, QI has found no contemporaneous citations to support this possibility.

This entry presents a snapshot of what is known. The joke was initially linked to an unknown “distinguished citizen of North Carolina”, but the anecdote was prefaced with the locution “it is said” signaling that the tale was being relayed via indirect knowledge. Indeed, the scenario might have been concocted by an anonymous jokesmith. More may be learned by future researchers.

The honorable member paused a few moments, and, then replied—”I suspect my people are in the situation of a traveler that I once heard of. He stopped at an inn to breakfast, and having drank a cup of what was given him, the servant asked, what will you have, tea or coffee?” To which the traveler answered—

“That depends upon circumstances. If what you gave me last was tea, I want coffee. If it was coffee, I want tea.—I want a change.”

The politician was presenting a joke that was already in circulation, and the punchline was delivered by an unidentified traveler. The piece above was widely distributed in 1840 and appeared in newspapers such as “The Indiana Journal” of Indianapolis, Indiana, “The Adams Sentinel and General Advertiser” of Gettysburg, Pennsylvania, and “The Schenectady Cabinet Or, Freedom’s Sentinel” of Schenectady, New York.

A traveller stopped at an inn to breakfast, and having drunk a cup of what was given him, the servant asked, “What will you have, tea or coffee?” The traveller answered—”That depends upon circumstances. If what you gave me was tea, I want coffee. If it was coffee, I want tea. I want a change.”

In 1844 the editor of a New York monthly called “The Knickerbocker” received a note from a writer who inquired whether he should submit prose or poetry for publication. The editor was very critical of the writer’s previous output and responded with derision. The following passage contained the Latin phrase “medio tutissimus ibis” meaning “you will go most safely by the middle course”:[8]1844 April, The Knickerbocker Or, New-York Monthly Magazine, Volume 23, Number 4, Editor’s Table, Start Page 389, Quote Page 398, Published by John Allen, Nassau-Street, New York. (Google Books … Continue reading

We hardly know what to say, in answer to this categorical query. It will not perhaps be amiss, however, to adopt the in medio tutissimus ibis style of the traveller, who, upon calling for a cup of tea at breakfast, handed it back to the servant, after tasting it, with the remark: ‘If this is tea, bring me coffee—if it is coffee, bring me tea; I want a change.’ If what ‘M.’ sends us is poetry, let him send us prose; if it is prose, (and it certainly ‘has that look,’) let him send us poetry, by all means.

In 1846 a Boston, Massachusetts periodical called “The Literary Museum” printed a version of the comical story with a local Boston setting:[9]1846 April 18, The Literary Museum: An Annual Volume of the Useful and Entertaining, Volume 3, Number 8, Rather Uncertain (short item), Quote Page 58, Published by J. B. Hall and Company, Boston, … Continue reading

RATHER UNCERTAIN—A gentleman who had lately arrived at a boarding house in this city, demanded of the lady of the establishment, at his first breakfast, whether she had helped him to tea or coffee.”

“Because,” replied the gentleman, “if this is tea give me coffee; and if coffee give me tea.”

“Take that away—change it.” “What do you want, Mr. Randolph?” asked the waiter, respectfully. “Do you want coffee or tea?”

The above citation was the first linkage to Randolph known to QI. The length of time between the death of Randolph in 1833 and this publication in 1852 substantially reduced the credibility of the tale.

Our fare at dinner was, of course, the never eaten roast beef, roast pig and sole-leather pudding; and for breakfast and tea, a dark colored witch’s broth, that reminded one of Mr Randolph’s retort upon a waiter, in hearing of the proprietor of a Richmond hotel.

“Boy,” said the beardless lord of Roanoake, “change my cup.” “Will you have coffee or tea, Mr. Randolph?” “If this is coffee, bring me tea; and if this is tea, bring me coffee—I want a change.”

In 1878 a volume based on the reminiscences of old neighbors and acquaintances of Randolph was published. The anecdote was shifted in time from the dinner table to the breakfast table:[12]1878, Home Reminiscences of John Randolph, of Roanoke by Powhatan Bouldin, Footnote, Quote Page 50, Published by The Author, Danville, Virginia, Printed by Clemmitt & Jones, Richmond, Virginia. … Continue reading

On one occasion he was at breakfast, when a cup was set at his plate. “Servant,” said he, “If this be coffee, give me tea, and if it be tea, give me coffee.”

In February 1902 a journal based in Boston, Massachusetts called “The Advocate of Peace” printed a speech that ascribed the quip to Abraham Lincoln:[13]1902 February, The Advocate of Peace, Volume 64, Number 2, Chinese Exclusion by William Lloyd Garrison (This might be the son of the famous William Lloyd Garrison who died in 1879), (From an address … Continue reading

As Mr. Lincoln said, “If this is coffee, give me tea; if it is tea, give me coffee.”

The above citation was the first linkage to Lincoln found by QI. Many sayings have incorrectly been attributed to the popular President who died more than 36 years before the 1902 speech was delivered. 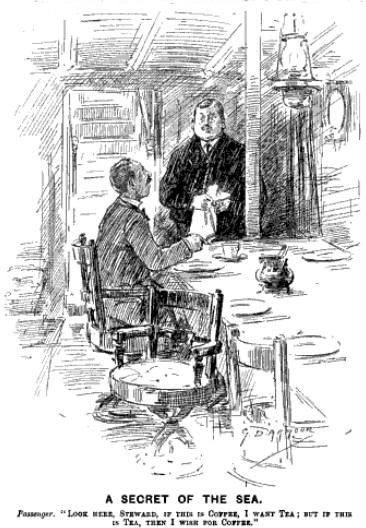 A SECRET OF THE SEA.
Passenger. “Look here, Steward, if this is coffee, I want tea; but if this is tea, then I wish for coffee.”

The poet Carl Sandburg wrote a celebrated six-volume biography of Lincoln, and the second volume released in 1929 included an instance of the joke. Sandburg expressed skepticism about the attribution, and he noted that if “a story or saying had a certain color or smack, it would often be tagged as coming from Lincoln”:[15] 1926, Abraham Lincoln: The Prairie Years by Carl Sandburg, Volume 2 of 2, Quote Page 297, Published by Harcourt, Brace & Company, New York. (Verified with scans)

Lincoln used a jest when other people might show anger. Given something distasteful in a restaurant one day, he called the waiter and said: “If this is coffee, please bring me some tea. But if this is tea, bring me some coffee.”

In conclusion, the quotation first appeared as the punchline of a joke that was circulating by 1840. Within the joke the words were spoken by a “distinguished citizen of North Carolina” or by an anonymous “traveler”. By 1852 John Randolph of Roanoke, Virginia was assigned the role of the traveler and the jest was ascribed to him. By 1902 the punchline was also being credited to the luminary Abraham Lincoln. Both later attributions were unlikely.

(Great thanks to George Dinwiddie whose inquiry led QI to formulate this question and perform this exploration. Many thanks also to Barry Popik for his valuable research.)