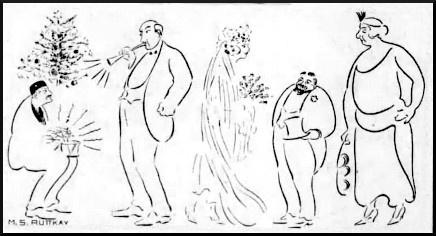 Dear Quote Investigator: The Broadway play “Abie’s Irish Rose” opened in 1922 and ran for more than five years which was a record-breaking achievement at the time. The writer and future actor Robert Benchley was the drama critic at “Life” magazine, and apparently he detested the production. Every week he crafted a new insult and printed it in the play guide that appeared in the periodical. Would you please list some of these barbs?

Quote Investigator: In June 1922 “Life” reviewed “Abie’s Irish Rose” and decried the hackneyed quality of its script. The humor was unfavorably compared to the contents of a discontinued humor magazine: 1

Any further information, if such could possibly be necessary, will be furnished at the old offices of “Puck,” the comic weekly which flourished in the ’90’s. Although that paper is no longer in existence, there must be some old retainer still about the premises who could tell you everything that is in “Abie’s Irish Rose.”

On August 10, 1922 “Life” magazine published a two word capsule review of the play in the weekly “Confidential Guide”. The production was housed at the Republic Theater. Boldface has been added to excerpts: 2

Below is a sampling of other remarks crafted by Benchley. On August 17, 1922 “Life” printed the following: 3

On September 14, 1922 Robert Benchley’s critique comically questioned the wisdom of the demos: 4

Abie’s Irish Rose. Republic.—People laugh at this every night, which explains why a democracy can never be a success.

Abie’s Irish Rose. Republic. — Showing that people will laugh at anything.

On August 9, 1923 “Life” printed a remark that would later reappear in truncated form with a different meaning than originally intended by Benchley; see the 1942 citation further below: 6

The comment printed on February 14, 1924 reflected annoyance and resignation: 7

Abie’s Irish Rose. Republic — In another two or three years, we’ll have this play driven out of town.

Abie’s Irish Rose. Republic — For the best comment to go in this space, we will give two tickets to the play.

On January 8, 1925 Benchley presented an update about the contest: 9

Abie’s Irish Rose. Republic—Contest for line closes at midnight, or at the latest, quarter-past midnight, on January 8. At present Mr. Arthur Marx is leading with “No worse than a bad cold.”

On November 12, 1925 Benchley pointed to a biblical verse to highlight the remarkable longevity of the play. Readers were free to interpret the multivalent verse as a cry of exasperation: 10

The “King James Version” of Hebrews 13:8 states “Jesus Christ the same yesterday, and to day, and for ever.”

Abie’s Irish Rose. Republic — We have nothing more to do with this. It may be running and it may not. To hell with it.

In 1942 the trade journal “Billboard” reported on a dinner honoring Anne Nichols who was the author of the lucrative play. The twisted fate of Benchley’s harsh criticism dated August 9, 1923 was described: 12

The testimonial dinner given author ANNE NICHOLS last week was a grand affair. It brought to light a number of amusing anecdotes, one of which concerned ROBERT BENCHLEY. For years BENCHLEY, then dramatic critic for the old Life, kept taking pokes at Abie. Once he wrote: “America’s favorite comedy. God forbid.” The theater management immediately blew up the line for lobby display. It read, “America’s favorite comedy.”

Benchley’s ineffectual barrage of animadversions was recalled in a 1951 book reviewed in “Cleveland Plain Dealer” newspaper of Ohio: 13

In her recent book about the Algonquin Hotel Round Table, titled The Vicious Circle, Margaret Case Harriman recalls the bright but ineffectual campaign against this dramatic blight carried on by Robert Benchley as drama editor of the old Life, the humor magazine. In Life’s weekly directory of Broadway plays, Benchley ran such comments after the listing of Abie’s Irish Rose as “just about as low as good clean fun can get,” “America’s favorite comedy, which accounts for the number of shaved necks on the street.” “We give up.” . . .

In conclusion, Robert Benchley did publish a series of negative comments in “Life” magazine about the play “Abie’s Irish Rose”.

Image Notes: Illustration of “Abie’s Irish Rose” from the June 11, 1922 issue of “The Brooklyn Daily Eagle”.

(Many thanks to Professor Michael J. Lewis who adroitly noted that Benchley was referring to the translation of Hebrews 13:8 presented in the King James Version of the Bible.)

Update History: On March 22, 2016 the translation provided for Hebrews 13:8 was switched to the verse given in the King James Version.