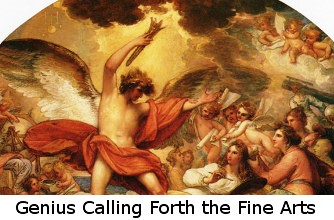 That genius is born, is a trite truth; education never creates, it only cultivates and directs the faculties.

An ancient adage states this controversial thesis concisely for the realm of poetry:

There are many examples of great poets and other geniuses such as Vincent van Gogh and Nikola Tesla who died in poverty. Oscar Wilde who was also financially strapped at the end of his life was aware of the pitfalls of brilliance, so he modified an adage with acerbic wordplay:

Would you please examine this expression?

The entertainment usually started with some humorous play on words. One of the company would say something obvious or trivial, repeat a proverb or commonplace tag such as, “Genius is born, not made,” and Oscar would flash in smiling, “not ‘paid,’ my dear fellow, not ‘paid.'”

Another article on this website discussed the following pair of sayings. The first was ancient and the second was in circulation by 1881:

Frank Harris credited Oscar Wilde with sharing the jest about genius in 1900. But it may have been constructed with knowledge of the preexisting poet remark.

“Work is the curse of the drinking classes.”
“I can resist everything except temptation
“The English have a miraculous power of turning wine into water.”
“Genius is born, not paid.”

In conclusion, there is substantive evidence that Oscar Wilde employed this saying in 1900 based on the biography by Frank Harris. The support was weakened because it was published many years after Wilde’s death. In addition, a similar quip was already in circulation.

Image Notes: Cropped portion of the Benjamin West painting Genius Calling Forth the Fine Arts to Adorn Manufactures and Commerce via WikiArt.org.