Work is the curse of the drinking classes.

Oddly, I have not found a citation for this statement dated before the death of Wilde. Would you please examine the provenance of this saying?

Quote Investigator: Oscar Wilde died in November 1900. The earliest published instance of this quip located by QI occurred in the caption of a newspaper cartoon in 1902. The details are given further below.

Yet there is good evidence that Oscar Wilde did craft this statement. In 1916 the writer and outsized personality Frank Harris who was a friend of Wilde’s published a biography titled “Oscar Wilde: His Life and Confessions”. Harris described a party he threw during which Wilde delivered the remark. Emphasis added to excerpts by QI:[1] 1916, Oscar Wilde: His Life and Confessions by Frank Harris, Volume 1, Quote Page 166, Brentano’s, New York. (Google Books Full View) link

A little later I gave a dinner at the Savoy and asked him to come. He was delightful, his vivacious gaiety as exhilarating as wine. But he was more like a Roman Emperor than ever: he had grown fat: he ate and drank too much; not that he was intoxicated, but he became flushed, and in spite of his gay and genial talk he affected me a little unpleasantly; he was gross and puffed up. But he gave one or two splendid snapshots of actors and their egregious vanity. It seemed to him a great pity that actors should be taught to read and write: they should learn their pieces from the lips of the poet.

Yet even when making fun of the mummers there was a new tone in him of arrogance and disdain. He used always to be genial and kindly even to those he laughed at; now he was openly contemptuous.

The accuracy of the above ascription to Wilde depends on the veracity of Harris who was a direct witness. Harris explained the long delay before the appearance of his book in the introduction. Wilde was a controversial figure and Harris’s sympathetic work condemned the harshness of Wilde’s punishment. Harris waited more than ten years hoping that someone else would write a comparable book. He acted when he finally felt compelled to present his own viewpoint. 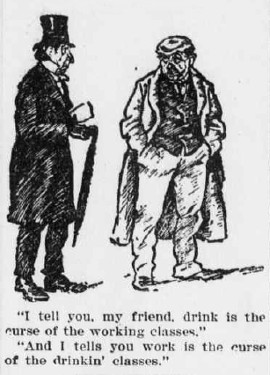 In April 1902 the “Ottumwa Semi-Weekly Courier” of Ottumwa, Iowa printed a one-panel cartoon with a caption containing the original adage about the working classes together with the transformational joke about the drinking classes.[2] 1902 April 08, Ottumwa Semi-Weekly Courier, Cartoon Title: VICE VERSA (One-Panel Cartoon Caption), Quote Page 10, Ottumwa, Iowa. (Chronicling America) link See the accompanying image. QI does not know the name of the artist. In May 1902 “The Kalispell Bee” in Kalispell, Montana printed the same cartoon and caption:[3] 1902 May 07, 1902, The Kalispell Bee Cartoon Title: Hitting Him Back (One-Panel Cartoon Caption), Quote Page 7, Column 4, Kalispell, Montana. (Chronicling America) link

In 1905 “The Sporting Times” of London reported that the jest was told by an “Irish barrister”:[4] 1905 January 28, The Sporting Times, Sporting Notes, Quote Page 1, Column 1, London, England. (British Newspaper Archive.co.uk)

Coming out of the “Victoria” they were discussing Admiral Rodjestvensky and the Russian people.

“It’s just this in Russia,” said an Irish barrister from Calcutta, “it’s just this way. In Russia work is the curse of the drinking classes!”

In June 1906 a newspaper in Utica, New York described a party scene at a club in New York City that included the popular actor Wilton Lackaye who was best known for playing the role of Svengali. The quip was incorporated into a rhyming verse:[5] 1906 June 27, Utica Herald Dispatch, (Brief untitled item), Quote Page 6, Column 1, Utica, New York. (Old Fulton)

At the “Washing Day” of the Lambs Club of New York, yesterday, all the members sang, with Wilton Lackaye improvising and repeating the words in advance:

Too much toil with no vacation
Justifies a slight libation;
So here’s a toast, now drain your glasses,
Work is the curse of the drinking classes.

There was also a stanza denouncing both war and work as needless.

Four well-known young clubmen, two of whom were married, and all hailing from Washington, came to Atlantic City on a bit of a tear the other day, and at a prominent cafe one evening one of them repeated the following toast, apropos of their cases:

“Too much toil with no vacation,
Justifies a slight libation;
So here’s a toast, now drain your glasses,
Work in the curse of the drinking classes.”

In 1907 “The Sun” newspaper of New York described the financial, physical, and moral disintegration of a one-time waiter named Gustav Traub:[7] 1907 January 13, The Sun, Traub’s Vision of Wealth: Caused Him To Drink and To Threaten Murder, New York. (Old Fulton)

After that there was little work that had attractions for Traub. Instead of working he used to spend most of his time in the saloons talking about his property and spending the money his wife made over the washtub. Work, he told his neighbors was the curse of the drinking classes.

According to John Pierre Roche of the Show World, Wilton Lackaye has written a volume of verse entitled “Ballads of Broadway,” said to display the White Way knowledge of Lee Harrison and the versification powers of Kipling in his palmiest salad days. One of the gems of the collection starts:

“All together! Raise your glasses!
Work is the curse of the drinking classes!”

Too much work and no vacation
Justifies a slight libation;
Here’s a toast, boys, raise your glasses
Work is the curse of the drinking classes.

Mr. A. M. Brinstead, the immortal “Pitcher,'” died the other day in London at the comparatively early age of 51. He was a scholar of brilliant attainments and the ablest Bohemian journalist in the Empire. He said that “Work is the curse of the drinking classes?” but he worked hard himself and drank little. He died in harness.

In 1916 the Wilde received credit for the saying in the biography “Oscar Wilde: His Life and Confessions” by Frank Harris as noted previously:

Work is the curse of the drinking classes.
Author unidentified

What other people took seriously he dealt with humorously; what they dismissed as trivial he treated with great solemnity. His favourite method of ridiculing conventional standards was to change a word or two in a proverb or cliché, and so add an aspect to truth. Here are some good examples of his conversational flings:

“Work is the curse of the drinking classes.”
“One of those characteristic British faces that, once seen, are never remembered.”
“Everyone should keep someone else’s diary.”
“It is always a silly thing to give advice, but to give good advice is absolutely fatal.”

In conclusion, QI believes that the ascription to Oscar Wilde is the most plausible. Nevertheless, it is conceivable that the expression was crafted after his death. In that case, the artist responsible for the 1902 cartoon becomes the top candidate.

(Great thanks to Fred Shapiro whose inquiry led QI to formulate this question and perform this exploration. Shapiro is the editor of “The Yale Book of Quotations” which contains the key 1916 ascription to Oscar Wilde. Special thanks to top researchers S. M. Colowick and Stephen Goranson who located valuable citations in 1909, 1911, and 1915. Thanks also to discussant Laurence Horn.)