Vicar’s Wife (sympathisingly). “Now that you can’t get about, and are not able to read, how do you manage to occupy the time?”

Old Man. “Well, mum, sometimes I sits and thinks; and then again I just sits.“

Below is an image showing the 1906 cartoon from “Punch”. 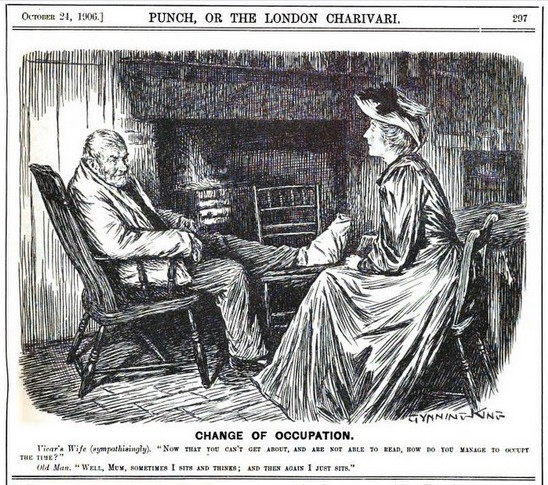 In June 1910 columnist Alice G. Young wrote a column in a Kansas newspaper that referred to a wide variety of well-known books and authors including Dickens. She included a variant statement about sitting and thinking:[5] 1910 June 30, The Downs Times, Women and Their Work–Ours and Others by Alice G. Young, Quote Page 6, Column 5, Downs, Kansas. (Newspapers_com)

“I will never desert you Mr. Micawber” but in land of oranges like gold in leafy bloom you will “sit and think, mostly sit”

In September 1911 the variant statement was ascribed to Woodrow Wilson who employed it in a political barb:[6] 1911 September 21, The Pratt Union, (Untitled short item), Quote Page 4, Column 2, Pratt, Kansas. (Newspapers_com)

Governor Woodrow Wilson says: “I’m sorry for the man in public office who is afraid of anybody. I can imagine nothing more terrible than the conscience of the political coward. What a dog he must be! A conservative man is a man who just sits and thinks, mostly sits.”

There is some reading done, a deal of sleeping and much eating, but for the most part it rather resembles the days of a bucolic old gentleman who was asked, since he was past bucolic activities, what he did with his time. “Sometimes,” he said, “I sits and thinks, and other times I just sits.”

Lucy Maud Montgomery became famous writing the series of novels that began with “Anne of Green Gables”. The 1915 novel “Anne of the Island” was part of that series, and it included an instance of the saying:[8] 1915, Anne of the Island by L. M. Montgomery (Lucy Maud Montgomery), Chapter 30: Mrs. Skinner’s Romance, Quote Page 246, Grosset & Dunlap, New York. (Google Books Full View) link

Part of the time I sits and thinks and the rest I jest sits.

“Sometimes I sit and think. Other times I just sit.”

This attitude, common among elderly people, is deplored by other senior citizens who have refused to “sit out” their remaining years.

In 2006 a remark in the “Chicago Tribune” implausibly attributed the saying to Winnie the Pooh. The first “Pooh” book from A. A. Milne appeared in 1926:[10] 2006 November 28, Chicago Tribune, Not enough ‘me time’ by Emilie Le Beau (Special to the Tribune), Section 5: KidNews, Quote Page 12, Column 2, Chicago, Illinois. (Newspapers_com)

“There’s a Winnie the Pooh quote where he says, ‘Sometimes I sit and think, sometimes I just sit.’ Kids need time to just sit,” Fox says.

In 2009 Satchel Paige received credit for the saying in the pages of an Eau Claire, Wisconsin newspaper:[12] 2009 October 10, Leader-Telegram, Matter of Faith: Sometimes you have to ‘just sits’ by Rev. David Huber, Quote Page D3, Column 1, Eau Claire, Wisconsin. (Newspapers_com)

“Sometimes I sits and thinks, and sometimes I just sits.”

That famous quote by baseball legend Leroy “Satchel” Paige has rattled in my head for decades, reminding me of the rest we all require but rarely acquire.

In conclusion, based on the February 18, 1905 citation the originator was an anonymous Maine fisherman. The 1906 cartoon in “Punch” helped to popularize the expression, but it was already circulating.

(Great thanks to Laloofah whose inquiry led QI to formulate this question and perform this exploration. Thanks to Nigel Rees and Barry Popik for their pioneering research. As noted in the body of the article, Popik found a March 1905 citation.)