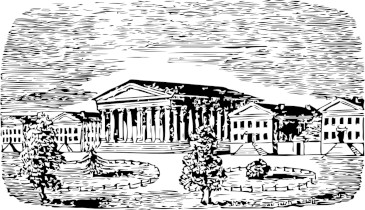 Dear Quote Investigator: According to a legislative legend, a naïve politician with a limited vocabulary wished to provide funding for a state college; however, an adversary wanted to spend the money on a different project. The verb “matriculate” means to enroll at a college or university, but this definition was not properly grasped by the politician. Thus, the adversary decided to cleverly besmirch the college using sexual innuendo. Here are two examples:

The scandalized politician repudiated the college. Would you please explore this anecdote?

Quote Investigator: The earliest instance of this tale located by QI appeared in “The Charleston Daily Mail” of Charleston, West Virginia in 1933. The anecdote was presented by a West Virginian politician Ralph M. Hiner. He described an unnamed farmer with little experience who was elected to the New York State Senate and wished to pass a bill providing $500,000 to an educational institution. His opponents were members of the Tammany Hall political machine. Emphasis added to excerpts by QI:[1] 1933 February 26, The Charleston Daily Mail, As Told In Our Town, Quote Page 6, Column 7, Charleston, West Virginia. (Newspapers_com)

“Well, senator,” the other tried to confuse him, “don’t you know they have a curriculum at that school?”

“And did you know that they have two semesters?”

“Senator” the pleader continued, almost desperate, “do you know that boys and girls matriculate at that school?”

“Well, I won’t stand for that!” the senator stormed “Give me my bill.” Whereupon he tore it to bits.

Brilliant researcher Bonnie Taylor-Blake has published an entertaining piece titled “Dirty Politics: Smathers, Pepper, and Quasi Malediction in American Political Folklore” presenting several humorous examples of phrases that have reportedly been used to attack politicians and their relatives, e.g., “a shameless extrovert”, “a thespian in Greenwich Village” and “a sexagenarian”.

The Exponent tells of a certain farmer who wouldn’t allow his daughter to enter Purdue when he found out that all coeds were required to matriculate before entering the school, and both boys and girls used the same curriculum . . .

“Did he tell you that the girls had to matriculate before they could get in?” persisted the opponent.

“Gosh, no” replied the farmer.

“And did he tell you that the boys and girls had to use the same curriculum?”

Whereupon the farmer got hot under the collar.

“No,” he stormed, “the crook did not say anything about that. Now I’ll be durned if they get the appropriation!”

In 1947 a newspaper in Iowa presented an old tale about a legislator who was a graduate and booster of the State University of Iowa (now known as the University of Iowa). The funding of the school was in jeopardy because of the reputedly lax morals of the students. The booster sought to divert attention by highlighting the questionable conduct of a rival school:[5] 1947 April 25, The Courier, Vague Hints of Sin, Quote Page 4, Column 2, Waterloo, Iowa. (Newspapers_com)

“Why, when the boys and girls go to Iowa State the very first thing they do is matriculate together! Moreover, throughout the whole year at Ames the men and women use the same curriculum! And then at the end of the year” and the speaker’s voice dropped to a whisper, “the men and the women students gather in a hall for one last, mad convocation!”

In 1950 the anecdote was relocated to the state legislature in Raleigh, North Carolina, and the time was loosely specified as “some years ago”:[6] 1950 November 17, Asheville Citizen-Times, Not a Dad-Burned Cent! (Ed Moss In Morganton News-Herald), Quote Page 14, Column 6, Asheville, North Carolina. (Newspapers_com)

“Why, do you know the boys and girls use the same curriculum,” he said. “Not only that,” he continued, “but they matriculate together.”

The legislator gasped in shocked surprise.

“Here’s the worst thing,” the lobbyist continued. “A male professor can demand that any girl in his class show him her thesis and she has to do so.”

By this time the legislator was convinced. “I won’t vote ’em a dad-burned cent,” he blurted out.

The legislator looked startled. “And that boys and girls often matriculate together?” “No,” exclaimed the lawmaker. The lobbyist came closer and whispered, “And a young lady student can be forced at any time to show a male professor her thesis?”

The legislator shrank back in horror. “I won’t vote them a damn cent!” Rammer Jammer

In conclusion, the locales and details of these stories are ever shifting. This instability signals that these funny anecdotes are apocryphal. Yet, it is conceivable that there exists a genuine seed tale, perhaps in New York state. This article presents a snapshot of current research, and QI looks forward to future discoveries.

Image Notes: Illustration of college campus from Clker-Free-Vector-Images at Pixabay.

(Great thanks to Bonnie Taylor-Blake whose research efforts in this area led QI to formulate this question and perform this exploration. Taylor-Blake located the March 1937 citation for the “matriculate” joke together with many other citations for this style of humor. See the link to her essay which appears near the beginning of this article.)