Dear Quote Investigator: The following trenchant simile is the best description of a futile conflict that I have ever heard:

The clash was like two bald men fighting over a comb.

The prominent Argentinian author Jorge Luis Borges employed this figure of speech, but I do not think he coined it. Would you please explore this topic?

Quote Investigator: A precursor tale about two bald men has been ascribed to the ancient Roman fabulist Phaedrus who wrote in the style of Aesop. The translation into English given below was published in 1761. Emphasis added to excerpts by QI:[1]1761, The Fables of Phædrus in Latin and English: The Translation as Literal as the Idioms of the Two Languages Will Admit by Mr. Hoadly and Several Other Eminent Hands, For Use In Schools, Book 5, … Continue reading

A Bald Man chanced to find a Comb upon the publick Way. One equally destitute of Hair came Up, and claim’d his equal Share. The first immediately produced the Booty, and withal added: “The Gods ’tis plain favour us, but envious Fate has made us find (as the Proverb is) a Coal instead of a Treasure.”

The Complaint of this Fable suits the Man who has been disappointed in his Hopes.

The two men did not fight in this tale. One man simply bemoaned their joint fate because neither could use the comb.

On a certain day, two bald-headed men saw a piece of ivory shining in a corner:—each wished to have it; they disputed which of the two had the best right to it, and which had first perceived it. Both maintained their claims, and, from small words, came to blows; and the blows were so violent, that the battle was soon ended.

You will easily suppose, that the conqueror lost, in the contest, the few straggling grey hairs he had left. —

The object of the quarrel was brought forward to the light:—it was an ivory comb!

In 1860 W. R. Evans published another version of the fable under the title “The Two Bald Men” while acknowledging Florian:[4]1860, A Century of Fables: In Verse, For the Most Part Paraphrased or Imitated from Various Languages by W. R. Evans, Fable 30: The Two Bald Men (Imitated from Florian), Quote Page 41, Robert … Continue reading

Two bald old scavengers, who saw a bit
Of ivory gleaming in the dust they swept,
Each strove at the same time to seize on it,
But neither could the other intercept.
In fact, their bald pates meeting with a bump,
They fell to fighting for the half-hid prize;
And while exchanging many a heavy thump.
One got a broken nose, one two black eyes.
This conquer’d, but he lost the only tuft
Of hair still left on his corporeal dome;
And when he clutch’d the prize for which they’d cuff’d,
Oh, mockery! it was a small-tooth’d comb!

In 1863 “The Morning Post” of London, England printed an instance of the simile. Member of Parliament Clarke Jervoise was speaking about the “church rates”, i.e., the tax collected to support the official state church in England. He suggested that the conflict over the church rates was futile because the amount raised via the tax was inadequate:[5] 1863 January 16, The Morning Post, The Hampshire Members On Public Affairs, Quote Page 2, Column 3,London, Greater London, England. (Newspapers_com)

There was the question of church rates. (Oh, oh.) It had arrived at such a state that it reminded him of the fable of the two bald old men fighting for a bit of ivory which they found on the ground, and which turned out to be a comb. (Laughter.) 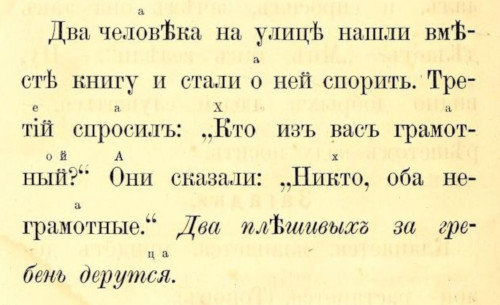 Here is the text in modern Russian followed by one possible translation into English:

Two people on the street together found a book and began to argue about it. A third one asked: “Which of you is literate?” They said: “No one; both of us are illiterate.” Two bald men are fighting for a comb.

QI conjectures that Leo Tolstoy was sharing an existing cultural expression with anonymous provenance, and he did not craft the simile.

In 1888 several U.S. newspapers including one in Atchison, Kansas printed an English instance of the story and credited Tolstoy:[7] 1888 April 13, Atchison Daily Champion, Quarreling Over a Book, Quote Page 5, Column 4, Atchison, Kansas. (Newspapers_com)

Two men found a book in the street, and began to dispute as to the ownership of it. A third happened along and asked, “Which of you can read?” “Neither of us.” “Then why do you want the book? Your quarrel reminds me of two bald men who fought for possession of a comb, when neither had any hair on his head.“—The Long Exile—Tolstoi.

In 1896 “The New York Times” published a piece about public libraries and mentioned the tale of the quarrelsome bald men:[8] 1896 May 3, The New York Times, The Traveling Library: How To Get From 50 To 100 Books From the State Library, Quote Page 32, Column 7, New York. (ProQuest)

It could only have been in Russia where Tolstoi describes the following scene: “Two men found a book and began to dispute as to its ownership. A third man happened to come along and asked, ‘Which of you can read?’ ‘Neither of us,’ ‘Then what do you want with the book? Your quarrel reminds me of two bald men who fought for the possession of a comb, when neither had any hair on his head.‘”

The story continued to circulate in 1935 when it appeared in “The Great Fables of All Nations” within a section dedicated to Tolstoy:[10]1935 (Copyright 1928), The Great Fables of All Nations, Selected by Manuel Komroff, Section: Leo Nikolaievich Tolstoi, Fable: The Book, Quote Page 454, Tudor Publishing Company, New York. (Verified … Continue reading

Two men together found a book in the street, and began to dispute as to the ownership of it.
A third happened along, and asked; “Which of you can read?”
“Neither of us.”
“Then why do you want the book? Your quarrel reminds me of two bald men who fought for possession of a comb, when neither had any hair on his head.”

Two baldhead men are fighting over a comb.
RUSSIAN SAYING

Why should two bald men fight over a comb?

On the argument over which side wants war: “Why should two bald men fight over a comb?”

On criticism: “If everyone washed his own doorstep, how clean the town would be.”

On concentrating on the past: “He who scratches a scar is twice wounded.”

The dispute has been likened to one between two bald men fighting over a comb. The British still want the comb, if only to hand it over nicely.

Argentine author Jorge Luis Borges, 83, on the Falklands War: “The Falklands thing was a fight between two bald men over a comb.”

In conclusion, QI conjectures that this simile evolved from the fable recorded by Phaedrus. Over time the two bald men that were originally depicted as commiserators became adversaries. By 1792 a version about an ivory comb was circulating. Leo Tolstoy helped to popularize this figure of speech by including it in a Russian children’s primer in 1874. By 1888 it appeared again in English with an ascription to Tolstoy. There is substantive evidence that Jorge Luis Borges employed it by 1983.

Image Notes: Illustration of several types of combs in silhouette from Kaz at Pixabay. Image has been cropped, retouched, and resized.

(Great thanks to researcher Nigel Rees who discussed this topic in his April 1992 newsletter and his recent Kindle book “The Best Guide to Humorous Quotations”. Rees presented citations beginning in 1938 and noted the ascription to Borges. Many thanks to Sue Watkins who sent QI a link to a webpage displaying an etching dated 1809 called “Two Bald Men Fighting Over a Comb” by Karl Russ of Austria. Special thanks to Peter Reitan who located an 1888 citation. Additional thanks to Alex Levenberg who relayed an inquiry from me to a knowledgeable Russian person who identified the story containing the simile within a collection assembled by Tolstoy. Several people kindly offered to help QI with the Russian text: Gerald Cohen, Jay Dillon, Ivan Van Laningham, Artem Fedorychak, and imwitty. QI is responsible for all errors.)