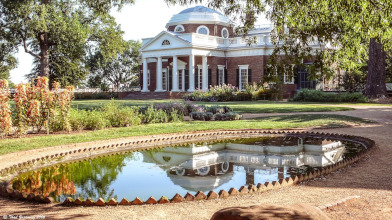 Dear Quote Investigator: A large number of the quotations attributed to Thomas Jefferson are apocryphal; hence, I have learned to be cautious. Do you know whether the following remark is from the pen of Jefferson?

Honesty is the first chapter of the book wisdom.

Any help would be appreciated.

Quote Investigator: Thomas Jefferson sent a two page letter to Nathaniel Macon on January 12, 1819. The saying about honesty appeared on the second page. Emphasis added to excerpts by QI: 1

Whether the succeeding generation is to be more virtuous than their predecessors, I cannot say; but I am sure they will have more worldly wisdom, and enough, I hope, to know that honesty is the 1st chapter in the book of wisdom.

The website of the U.S. Library of Congress hosts images of many important historical documents. Below is a reduced-size image of the second page of Jefferson’s letter containing the quotation. Lines added by QI on the left and right of the page indicate the location of the remark. 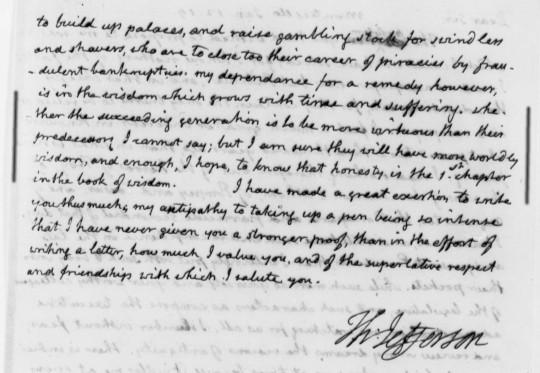 Between 1892 and 1899 a ten volume series presenting “The Writings of Thomas Jefferson” was published under the editorship of Paul Leicester Ford. A transcription of the 1819 letter was included. The handwritten letter contained “1st”, but the transcription contained “first”: 2

Whether the succeeding generation is to be more virtuous than their predecessors, I cannot say ; but I am sure they will have more worldly wisdom, and enough, I hope, to know that honesty is the first chapter in the book of wisdom.

In 1900 “The Jeffersonian Cyclopedia: A Comprehensive Collection of the Views of Thomas Jefferson” edited by John P. Foley appeared. This reference included the saying under exploration and pointed to Ford’s multi-volume work: 3

The valuable Monticello website of the Thomas Jefferson Foundation has a webpage about the quotation which cites the 1819 letter from Jefferson to Macon. 4

In conclusion, Thomas Jefferson should receive credit for the words about honesty he wrote in the letter dated January 12, 1819.

Image Notes: Picture of Monticello, the former residence of Thomas Jefferson in Charlottesville, Virginia from skeeze at Pixabay.

(Great thanks to Andrew Wetzel whose inquiry led QI to formulate this question and perform this exploration.)