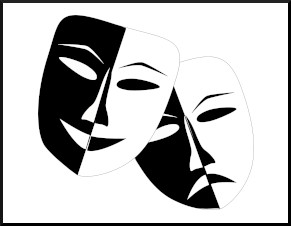 All comedy is tragedy, and at its merriest is but dolorous stuff. While the curtain stays down we are sorry actors with the whole world for our audience, and the hoots mingle full often with the applause.

In 1910 “The Times” of London reported that Thomas Hardy was honored with “The Freedom of the Borough of Dorchester”. He delivered a speech that included a slightly more compact version of the remark under examination. Interestingly, he credited John Ruskin although he also expressed some uncertainty:[3] 1910 November 17, The Times, Dorchester and Mr. Thomas Hardy, Quote Page 12, Column 3, London, England. (Newspapers_com)

I will detain you no longer from Mr. Evans’s comedy that is about to be played downstairs. Ruskin somewhere says that comedy is tragedy if you only look deep enough. Well, that is a thought to remember; but to-night, at any rate, we will all be young and not look too deeply.

I am not able to say what influence Meredith may be exercising over the writings of the present generation. Some of his later contemporaries and immediate successors certainly bear marks of his style and outlook, particularly in respect of The Comic Spirit, most of them forgetting, as he did not forget (though he often conveniently veiled his perception of it), that, as I think Ruskin remarks, “Comedy is Tragedy if you only look deep enough.”

The text above is from “Thomas Hardy’s Personal Writings” edited by Harold Orel in 1966. The footnote accompanying the text points to the following letter by John Ruskin as a possible explanation for why Hardy ascribes the remark under examination to Ruskin:[5]1966, Thomas Hardy’s Personal Writings: Prefaces, Literary Opinions, Reminiscences, Edited by Harold Orel, Section: Notes, (Note Number 40), Quote Page 274, University of Kansas Press, … Continue reading

QI examined this letter, and Ruskin did discuss comedy and tragedy, but the missive contained no solid match for the quotation in QI’s opinion. The reader may wish to personally examine Ruskin’s letter. Here is a link to the sole occurrence of the word “comedy” in the volume.

QI has written an article about a thematically related saying. The television personality Steve Allen penned the following adage in February 1957: Tragedy plus time equals comedy. More information on this topic is available here.

And Hardy had a profound sense of humor, as active in his novels as in his poetry. “All comedy,” he wrote, “is tragedy, if you only look deep enough into it.”

In conclusion, QI believes that Thomas Hardy should receive credit for the statement he wrote in 1889. Hardy may have been inspired by the words of John Ruskin, but there is no substantive evidence that he lifted the remark from Ruskin.

Image Notes: Illustration of masks depicting comedy and tragedy from Clker-Free-Vector-Images at Pixabay. Image has been resized and retouched.

(Many thanks to Gregory Tate who located the remark in the 1889 letter and mentioned it in a tweet. Thanks also to Greg Priest who noted the thematic connection to “Comedy equals tragedy plus time”. In addition, thanks to Jeremy Marchant for his comments.)