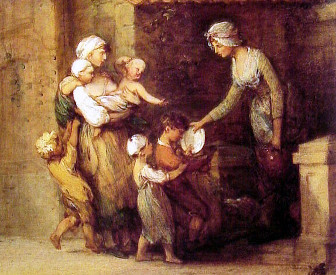 Quote Investigator: The earliest match located by QI appeared in 1863 within the French journal “Le Magasin Pittoresque” (“The Picturesque Store”) . A filler item stated the following. Boldface added to excerpts by QI: 1

A precursor appeared in lines of verse published by the French author Claude Joseph Dorat in 1769. The lines suggested that performing a worthwhile action was superior to producing a lovely work of art. The original French below is followed by an English translation: 2

A beautiful action is better than the most beautiful work.

In 1863 “Le Magasin Pittoresque” published an instance of the saying under examination as mentioned previously.

The lines from Claude Joseph Dorat were culturally memorable, and they reappeared in “Grand Dictionnaire Universel du XIXe Siècle” (“Great Universal Dictionary of the 19th Century”) in 1865: 3

In 1876 the saying appeared in English within the compilation “Human Nature: A Mosaic of Sayings, Maxims, Opinions, and Reflections on Life and Character”. The words were attributed to “Duguet”. QI is uncertain about the identity of this referent. Theologian Jacques Joseph Duguet who died in 1733 is a possibility: 4

DUGUET.
The smallest good deed is better than the grandest good intention.

In 1880 a newspaper in Kinsley, Kansas printed a miscellaneous collection of sayings without attributions which included the following four items: 5

In 1881 a columnist in a Portage, Wisconsin newspaper expressed the idea: 6

Don’t be a man who is always telling about the good deeds he is going to perform. Go and perform them. The good deed is much better for the world than the good intention.

In 1885 an instance appeared in a Belfast, Northern Ireland newspaper which acknowledged another paper: 7

As a matter of fact (says the Evening Standard), the smallest good deed is preferable to the most colossal good intention, for the former is a distinct contribution, however fractional, to the moral wealth of the world, whilst the latter, in spite of its pretensions, is of no practical value whatever.

In 1890 Cassell’s Family Magazine published a variant within a short story: 8

“You know I not only can’t write poetry, but I can’t read it.”

“That is a great misfortune for you,” she said, gravely. “But I think that a beautiful action is better than a beautiful thought, after all.”

In 1908 a thematic match was attributed posthumously to the famous minister and orator Henry Ward Beecher who had died in 1887. QI has not yet found a direct citation for these words in the speeches or writings of Beecher: 9

No matter what a man’s aims or resolutions, or professions may be, it is by one’s deeds that he is to be judged, both by God and man.—H. W. Beecher.

In 1917 the linkage to Duguet was recalled in a Wausau, Wisconsin newspaper: 10

A DAILY THOUGHT
The smallest good deed is better than the grandest good intention.
—Duguet.

In 1946 a column called “The Beehive” within the “The Bee” newspaper of Danville, Virginia printed the following version: 11

It is far better to do something than it is to plan everything. The smallest good deed counts far more than the grandest intention.

In 1958 “The New Speaker’s Treasury of Wit and Wisdom” by Herbert V. Prochnow included an instance without attribution: 12

The smallest deed is better than the grandest intention.

In 1964 the compilation “Distilled Wisdom” attributed the saying to Gaspard Doughet (Dughet), a French painter who died in 1675: 13

The smallest good deed is better than the grandest good intention.
—Gaspard Doughet

In 1968 the ascription to Duguet continued to circulate when it appeared in the pages of “The Forbes Scrapbook of Thoughts on the Business of Life”: 14

The smallest good deed is better than the grandest good intention. — Duguet

In 1988 the best-selling author H. Jackson Brown Jr. published a book containing quotations from his father, H. Jackson Brown. A variant statement using the word “kindness” was included in the compilation: 15

The smallest act of kindness is worth more than the grandest intention.
— Dad

In 2008 the saying about kindness was implausibly attributed to the famous wit Oscar Wilde who had died in 1900: 16

Oscar Wilde said: “The smallest act of kindness is worth more than the grandest intention.” Aren’t we fortunate that Arlington has a multitude of volunteers whose many acts of kindness have transformed their grand intentions into wonderful events.

In 2009 the syndicated newspaper feature “Crypto-Quote” credited the saying under examination to naturalist John Burroughs who had died in 1921. QI has not yet found any substantive support for this attribution: 17

Yesterday’s Answer “The smallest deed is better than the greatest intention.” — John Burroughs

In conclusion, this article presents a snapshot of current research. The saying about good deeds remains anonymous. It was circulating in French by 1863. Interestingly, it was credited to an unnamed English author. The variant expression about acts of kindness was credited to H. Jackson Brown by his son in 1988. The second statement probably evolved from the first statement.

Image Notes: Painting of “Charity Relieving Distress” from Thomas Gainsborough who died in 1788. Image has been cropped and resized.

(Great thanks to William Eaton whose inquiry led QI to formulate this question and perform this exploration. Eaton mentioned both statements together with attributions to Oscar Wilde and John Burroughs.)