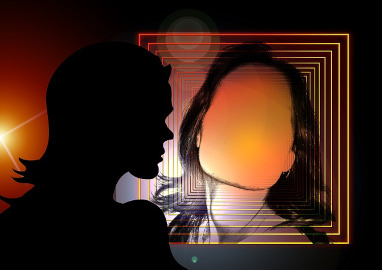 Dear Quote Investigator: “Be yourself” is an ubiquitous platitude. Here is a funny variant: Don’t be yourself—be someone a little nicer. Would you please explore the provenance of this quip?

Quote Investigator: The earliest instance located by QI appeared in a newspaper column called “Chatter” by Leata McQuiston published in the “Hobbs Daily News-Sun” of New Mexico in May 1964. The statement was enclosed in quotation marks signaling that the columnist was disclaiming credit for the humorous remark:[1] 1964 May 31, Hobbs Daily News-Sun, Chatter by Leata McQuiston, Quote Page 8, Column 4, Hobbs, New Mexico. (Newspapers_com)

“Don’t be yourself—be someone a little nicer.”

The second earliest instance located by QI appeared in “The Spokesman-Review” of Washington as a filler item within an advertisement section called “Shop With Sue” in October 1964. No attribution was specified.[2] 1964 October 29, The Spokesman-Review, Shop With Sue (Filler item within advertisement), Quote Page 5, Column 8, Spokane, Washington. (Newspapers_com)

Thus, the quip was circulating as an anonymous joke by 1964.

Always live up to your standards—by lowering them, if necessary

Don’t be yourself—be someone a little nicer.

It is conceivable that Mignon McLaughlin crafted the quip under examination. She may have initiated its circulation before May 1964. Subsequently, Leata McQuiston may have seen the remark and put it into her column. But QI has not yet found evidence to support this hypothesis.

“The way to a man’s heart is through his stomach, especially if you tell him how flat it is.”

“Don’t be yourself — be someone a little nicer.”

“Be yourself. Well, maybe someone a little nicer.”
— Barbara Bush

In conclusion, this quip was circulating by May 1964 without attribution. Mignon McLaughlin helped to popularize it with her 1966 book “The Second Neurotic’s Notebook”. Currently, the authorship is anonymous although it is possible McLaughlin crafted it.