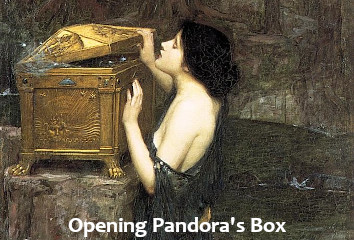 Dear Quote Investigator: Feeling discouraged is a natural reaction to the state of the world sometimes. Currently, there is a pandemic curtailing social and economic activity almost everywhere. Yet, these pessimistic feelings will not last forever. My favorite witty person, Mignon McLaughlin, once presented a clever definition of “hope” that is pertinent.

Quote Investigator: In 1963 the U.S. journalist Mignon McLaughlin published a collection of quips and observations titled “The Neurotic’s Notebook”. Here is her germane remark: 1

When hope is hungry, everything feeds it.

There are whole years for which I hope I’ll never be cross-examined, for I could not give an alibi

Image Notes: Painting of Pandora by John William Waterhouse circa 1896. Image has been resized, retouched and cropped. The opening of Pandora’s box released death, sickness, and other maladies. The final item in the box was hope.

Dear Quote Investigator: December is a season of generosity for many, but the eagerness of participants varies. A friend recently joked that she wanted to achieve a reputation for generosity as cheaply as possible. She disclaimed authorship of this quip. Would you please explore its provenance?

Quote Investigator: The earliest match known to QI appeared in “The Neurotic’s Notebook” by Mignon McLaughlin in 1963. The compendium contained quips, adages, and observations such as the following two items: 1

Life marks us all down, so it’s just as well that we start out by overpricing ourselves.

McLaughlin worked as a writer and editor at magazines such as “The Atlantic Monthly”, “Glamour”, and “Vogue” for decades from the 1940s to the 1970s. She was known for her witticisms.

END_OF_DOCUMENT_TOKEN_TO_BE_REPLACED 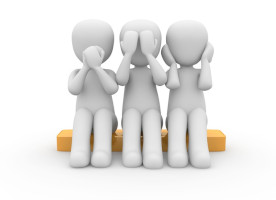 Dear Quote Investigator: Imagine reading a constructive, entertaining, and edifying discussion thread on social media. If you travel through the looking glass you can envision six impossible things before breakfast.

Now, imagine reading an unconstructive, mind-numbing, and obscurantist exchange. This latter possibility reminds me of a rueful remark from the famous wit Mignon McLaughlin. Would you please help me to find it?

No one really listens to anyone else, and if you try it for a while you’ll see why.

Quote Investigator: The earliest close match known to QI appeared in “The Neurotic’s Notebook” by Mignon McLaughlin in 1963. The compendium contained quips, adages, and observations such as the following three. Emphasis added to excerpts by QI: 1