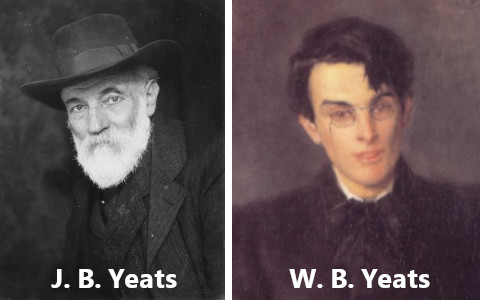 In August 1917 “The Athenaeum” journal of London published a review of the book mentioned above which included several reprinted snippets from the letters:[2] 1917 August, The Athenaeum, Book review of “Passages from the Letters of John Butler Yeats”, Quote Page 413, Column 1, The Athenaeum Office, London. (HathiTrust Full View) link

Of Blake he says, “Yet mysticism was never the substance of his poetry, only its machinery.” “What can be explained is not poetry.” These scraps of truth and penetrating insight are taken at haphazard from what almost amounts to a body of criticism and social theory.

As Mr. John Butler Yeats says: “What can be explained is not poetry.”

Recently I have been reading letters written by Mr. J. B. Yeats to his son the poet, in which the father says something to this effect, that what can be explained is not poetry. Without pretending to understand this statement, which itself may not be explainable, I suspect that it points in the same direction as does Rossetti’s poetry. Poetry should be addressed to the imagination, not the understanding; should suggest, not narrate; should be concerned with moods rather than facts.

The father of a great Irish poet once remarked, “What can be explained is not poetry.” There are people who want a book of verse to be like the arithmetic—you turn to the back of the book and find the answers.

Sandburg referred to the adage a second time on the next page:

It was something like this in the heart of the philosopher who declared, “What can be explained is not poetry.”

Picasso gives his slant as to his own ignorance related to that of others, “Why should I blame anybody else but myself if I cannot understand what I know nothing about?” And in Chicago we heard William Butler Yeats quote his father, “What can be explained is not poetry.”

What can be explained is not poetry.
WILLIAM BUTLER YEATS (1865-1939). Recalling his father’s words. In Carl Sandburg, “Notes for a Preface,” Complete Poems, 1950

Image Notes: Public domain picture of John Butler Yeats accessible via the U.S. Library of Congress’s Prints and Photographs division. Portrait circa 1900 of William Butler Yeats by his father, John Butler Yeats. Images have been cropped and resized.

(Great thanks to Lori Busch whose inquiry led QI to formulate this question and perform this exploration.)