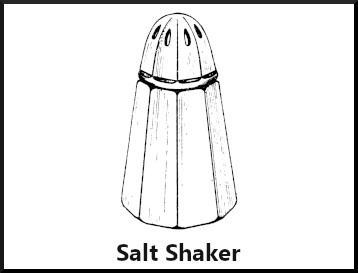 Dear Quote Investigator: Years ago the famous horror writer Stephen King was discussing how to become a successful artist, and he employed vivid figurative language that I can still recall. He indicated that talent was as common and cheap as table salt. His bracing insight was that success required great effort combined with talent. Would you please help me to find a citation?

Quote Investigator: In 1981 Stephen King published his analysis of the horror genre emphasizing the years from 1950 to 1980 in the book “Stephen King’s Danse Macabre”. Within the chapter “An Annoying Autobiographical Pause” he discussed the inability of talent by itself to guarantee triumph. Boldface added to excepts by QI:[1] 1981, Stephen King’s Danse Macabre by Stephen King, Chapter 4: An Annoying Autobiographical Pause, Quote Page 92, Everest House, New York. (Verified with scans)

I think that writers are made, not born or created out of dreams or childhood trauma—that becoming a writer (or a painter, actor, director, dancer, and so on) is a direct result of conscious will. Of course there has to be some talent involved, but talent is a dreadfully cheap commodity, cheaper than table salt.

King underscored the need for sustained thought and effort:

What separates the talented individual from the successful one is a lot of hard work and study; a constant process of honing. Talent is a dull knife . . .

Discipline and constant work are the whetstones upon which the dull knife of talent is honed until it becomes sharp enough, hopefully, to cut through even the toughest meat and gristle.

In 1996 a profile of Stephen King in “The Independent” of London attributed a streamlined version of the quotation to him:[2] 1996 March 10, The Independent, A career written in blood by Andy Beckett, Quote Page 19, London, England. (ProQuest)

The production line for what King calls his “literary equivalent of a Big Mac and large fries” has run at peak capacity ever since. King writes enough words for seven normal-length novels a year. “Talent is cheaper than table salt,” he said once. “What separates the talented individual from the successful one is a lot of hard work.”

Talent is cheaper than table salt. What separates the talented individual from the successful one is a lot of hard work.

In conclusion, Stephen King should receive credit for the words he wrote in “Danse Macabre” in 1981. Perhaps he also said the words in the 1996 profile. Alternatively, the latter version of the quotation may have been derived via compression from the 1981 remarks.

Image Notes: Public domain illustration of a salt shaker from a 1912 U.S. Government Printing Office Official Gazette. Image has been resized and retouched.

(Great thanks to the anonymous Stephen King fan whose inquiry led QI to formulate this question and perform this exploration.)