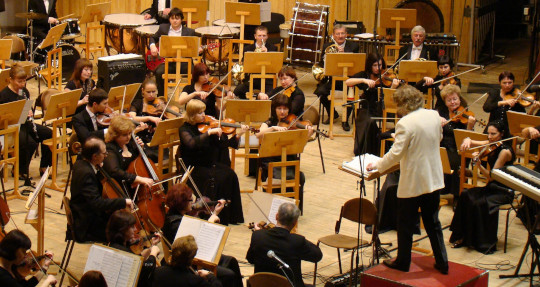 Dear Quote Investigator: A genuine leader must be willing to ignore a popularly help opinion when it is flawed and act in the best interest of all. This thought has been conveyed via a clever analogy:

When you wish to lead an orchestra you must be willing to turn your back on the crowd.

This saying has been attributed to bandleader Lawrence Welk, church minister Max Lucado, and someone named James Crook. Would you please explore the provenance of this expression?

Quote Investigator: In 1933 “The People” newspaper of London published a column called “Thought For To-day” containing items acquired from readers with the following promise of compensation:

Half-a-Guinea will be paid for the best original thought published. No quotation from books, calendars, etc.

If you want to lead the orchestra you must turn your back to the crowd.
From Islwyn Jeneins, 27 Pier Street, Rhymney, Mon.

The citation above was the earliest located by QI, and the newspaper rules specified that the saying was supposed to be original; hence, QI tentatively credits Islwyn Jeneins with authorship. Of course, it remains possible that the adage was lifted from elsewhere, and future researchers may discover more on this topic.

Wagner was the very first conductor who turned his back to the audience when leading an orchestra. Before him, the conductors stood à trois quart facing the public. You may well imagine what little influence a conductor could have on the orchestra, standing with his back to the musicians.

In 1941 a Buddhist publication titled “The Maha-Bodhi” based in India published highlights of a speech delivered in 1940 by Dr. G. P. Malalasekera who employed an elaborate instance of the saying while disclaiming credit:[3]1941 February, The Maha-Bodhi, Volume 49, Number 2, The Presidential Address of Dr. G. P. Malalasekera at the Ceylon Congress of Buddhist Associations Held at Moratuwa, 26th December, 1940, Start … Continue reading

It has been well said that he who would conduct the orchestra must face the music and turn his back on the crowd. The Buddhists discovered to their profound sorrow in the disputes regarding this ceremony that while there were many leaders there was no leadership. Though all were prepared to lead, none were eager to follow.

A man who wants to lead the Orchestra must turn his back on the Crowd.
Far too many people chase shadows, then worry because they never catch anything.
James Crook, David Street, Rochdale.

“A man who wants to lead the orchestra must turn his back on the crowd.”—James Crook, Picture Post, (London).

A man who wants to lead the orchestra must turn his back on the crowd.
—James Crook

Got anything to tell us, today, Lawrence Welk? “My philosophy is, life is like an orchestra. If a man wants to lead he must turn his back on the crowd.”

They hadn’t learned the first lesson of leadership. “A man who wants to lead the orchestra must turn his back on the crowd.”

In conclusion, the earliest match located by QI appeared in the London newspaper “The People” in 1933. Islwyn Jeneins received credit, and he is the currently the leading candidate for crafter of this saying. During subsequent years others have employed the expression including G. P. Malalasekera in 1940, James Crook in 1950, and Max Lucado in 1992. In addition, a columnist credited Lawrence Welk in 1982.

Image Notes: Picture of an orchestra and conductor from takazart at Pixabay. Image has been cropped and resized.

(Great thanks to Mark English and Nigel Rees whose inquiry in the 2022 newsletter led QI to formulate this question and perform this exploration. Many thanks to Gavin Schmidt who located the 1950 “Picture Post” citation which illuminated the common James Crook attribution.)