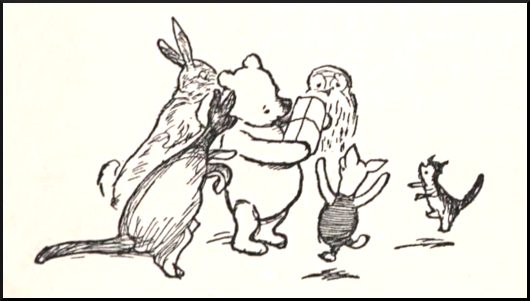 I am driven to the conclusion that my sense of kinship with animals is greater than most people feel. It amuses me to talk to animals in a sort of jargon I have invented for them; and it seems to me that it amuses them to be talked to, and that they respond to the tone of the conversation, though its intellectual content may to some extent escape them.

In 1982 the dialog appeared in “The Tao of Pooh” by Benjamin Hoff as stated previously.

Lots of people talk to animals. Not that many listen though. That’s the problem.
A. A. Milne, Winnie the Pooh

‘Lots of people talk to animals,’ said Pooh.
‘Maybe, but…’
‘Not very many listen, though,’ he said.
‘That’s the problem,’ he added.
Winnie the Pooh, A. A. Milne

Lots of people talk to animals… not very many listen, though…. That’s the problem.
~Benjamin Hoff, The Tao of Pooh

“Some people talk to animals. Not many listen though. That’s the problem.”
—A. A. Milne

In conclusion, QI has been unable to find this dialog in the works by A. A. Milne featuring Pooh. Instead, the dialog can be found in Benjamin Hoff’s 1982 work “The Tao of Pooh”.

Image Notes: Public domain illustration from the 1926 edition of “Winnie-the-Pooh” depicting several animals from the story. Image has been resized and retouched.

(Great thanks to Laurie whose inquiry led QI to formulate this question and perform this exploration. Laurie remarked that A.A. Milne and Benjamin Hoff had both received credit.)