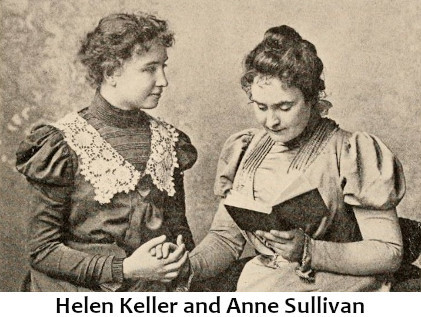 Dear Quote Investigator: There is an inspirational saying about beginning a task again even when you fail. Eventually, you will accomplish your purpose although it may not be exactly the purpose with which you began.

This notion has been attributed to Anne Sullivan who was the brilliant teacher of Helen Keller who overcame great adversities in her life. Would you please help me to find the correct phrasing together with a citation?

. . . “No matter what happens, keep on beginning and failing. Each time you fail, start all over again, and you will grow stronger until you find that you have accomplished a purpose—not the one you began with, perhaps, but one that you will be glad to remember.”

And who shall count the innumerable times that she tried, failed, and conquered?

END_OF_DOCUMENT_TOKEN_TO_BE_REPLACED 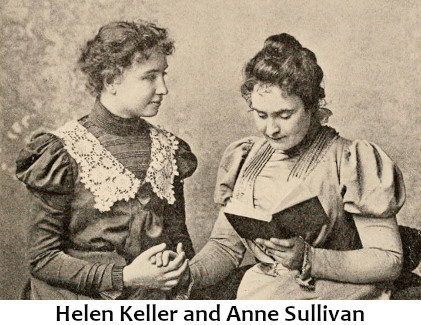 Dear Quote Investigator: The loss of a companion is heartbreaking. The following viewpoint has provided solace to many:

What we have once enjoyed and deeply loved we can never lose, for all that we love deeply becomes a part of us.

These words have been attributed to the deaf-blind social activist Helen Keller, but I have been unable to find a citation. Would you please help?

Quote Investigator: In 1929 Helen Keller published the book “We Bereaved” for individuals experiencing grief. The passage below contains two sentences that overlap the statement under investigation, and QI conjectures that these sentences were altered over time to yield the modern statement. Boldface added to excerpts by QI:[1] 1929, We Bereaved by Helen Keller, Quote Page 2, Leslie Fulenwider Inc., New York. (Verified with scans)

What we have once enjoyed we can never lose. A sunset, a mountain bathed in moonlight, the ocean in calm and in storm—we see these, love their beauty, hold the vision to our hearts. All that we love deeply becomes a part of us.

Interestingly, Keller decided to communicate the idea of the enduring presence of the departed via a passage filled with visual imagery.

END_OF_DOCUMENT_TOKEN_TO_BE_REPLACED

Dear Quote Investigator: Helen Keller was once asked about the price she would pay to gain the sense of sight. Her reported response was thoughtful and poignant:

I would rather walk with a friend in the dark than walk alone in the light.

What were the circumstances surrounding this quotation? I have been unable to find a solid citation.

Quote Investigator: In the early 1920s Helen Keller and her inseparable teacher Anne Sullivan faced a difficult financial situation, and they decided to earn money via appearances on the vaudeville circuit. The pair had already given performances on the Chautauqua circuit, and hence the experience of exhibiting themselves for remuneration was not alien.

Many of her quick sallies were not as spontaneous as they appeared. With businesslike foresight they began to list the questions usually asked, together with answers Helen might give. In the end the list ran to seventeen pages.

A list with dozens of Q&A pairs was given in the biography by Lash. The author did not state the provenance of the list, but he did have access to several key repositories, e.g., the Helen Keller archives at the American Foundation for the Blind and the archive at the Alexander Graham Bell Association for the Deaf in Washington, D.C. Here is a small sample of five Q&A pairs. The first concerns President Warren G. Harding:

Q. What do you think of Mr. Harding?
A. I have a fellow-feeling for him; he seems as blind as I am.

Q. What is the greatest obstacle to universal peace?
A. The human race.

Q. What is the slowest thing in the world?
A. Congress.

Q. Do you think women are men’s intellectual equals?
A. I think God made woman foolish so that she might be a suitable companion to man.

Q. Do you desire your sight more than anything else in the world?
A. No! No! I would rather walk with a friend in the dark than walk alone in the light.

The last answer above corresponds to the statement under exploration. So there is good evidence that Keller did communicate this saying. However, variants of this quote were being used in the religious domain many years earlier as discussed below.

END_OF_DOCUMENT_TOKEN_TO_BE_REPLACED

Dear Quote Investigator: The remarkable story of Helen Keller and her teacher Anne Sullivan has been told in books, television programs, and movies. Keller who was deaf and blind learned to communicate, obtained a college degree, and became a notable speaker and author. The following poignant words are attributed to her:

The best and most beautiful things in the world cannot be seen or even touched. They must be felt with the heart.

Did she write this in one of her books?

Quote Investigator: A nearly identical statement does appear in one of Keller’s books. Intriguingly, the words were not credited to her. The book “The Story of My Life” by Helen Keller was published by 1905, and it included a letter dated June 8, 1891 from Keller to the Reverend Phillips Brooks. She was almost 11 years old when the letter was written, and it contained the following passage [HKAS]:

I used to wish that I could see pictures with my hands as I do statues, but now I do not often think about it because my dear Father has filled my mind with beautiful pictures, even of things I cannot see. If the light were not in your eyes, dear Mr. Brooks, you would understand better how happy your little Helen was when her teacher explained to her that the best and most beautiful things in the world cannot be seen nor even touched, but just felt in the heart. Every day I find out something which makes me glad.

An extraordinary woman named Anne Sullivan was Keller’s teacher starting in 1887. So, the quotation originated with Sullivan instead of Keller; however, the young girl did embrace the thought it expressed. The statement evolved over time. For example, the phrase “felt in the heart” became “felt with the heart” in the modern version.