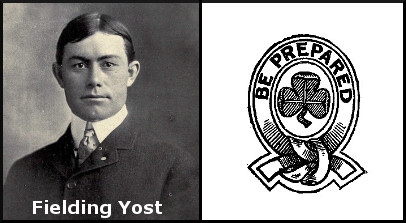 The will to win. We hear a lot about that. The will and the wish to win, but there isn’t a chance for either one of them to be gratified or to have any value unless there has been a will to prepare to win: the will to prepare for service, to do the things that build and develop our capacity, physical, mental, and moral.

Yost reiterated this notion during several speeches, and QI believes he was primarily responsible for its popularization although the phrasing he employed was variable. During the ensuing decades other coaches adopted the saying.

Below are additional selected citations in chronological order. END_OF_DOCUMENT_TOKEN_TO_BE_REPLACED

Dear Quote Investigator: There is an astute saying about gaining achievements through effort that deftly refers to the alphabetical order of a dictionary. Here are two versions:

This expression has been attributed to football coach Vince Lombardi, humorist Mark Twain, newspaper editor Arthur Brisbane, hair stylist Vidal Sassoon, and others. Would you please explore its origin?

Quote Investigator: QI has found no substantive evidence that Mark Twain made this statement. It is not listed on Barbara Schmidt’s TwainQuotes.com website, an important reference tool for checking expressions ascribed to the luminary. Also, it does not appear in the large compilation “Mark Twain at Your Fingertips”.

PERTINENT POINTER
“The only place where SUCCESS comes before WORK is in the dictionary.”—Clipped.

The acknowledgement “clipped” probably meant that the quip was clipped from another periodical; hence, the ascription remains anonymous. QI believes that the expression evolved over time from related jokes, and details are presented below.

END_OF_DOCUMENT_TOKEN_TO_BE_REPLACED

1) The greatest glory in living lies not in never falling, but in rising every time we fall.

2) The greatest accomplishment is not in never falling, but in rising again after you fall.

3) Our greatest strength lies not in never having fallen, but in rising every time we fall.

4) Our greatest glory is not in never failing, but in rising up every time we fail.

I have no idea if any of these ascriptions is correct because I have not seen any documentation listing a source. Would you please help me with this frustrating situation?

Quote Investigator: In 1760 and 1761 a series of letters written by an imaginary Chinese traveler based in London named Lien Chi Altangi was published in “The Public Ledger” magazine of London. The actual author was an Irishman named Oliver Goldsmith who used the perspective of an outsider from China to comment on and satirize the life and manners of the city. Goldsmith later achieved fame with his novel “The Vicar of Wakefield” and his play “She Stoops to Conquer”.[1] The Concise Oxford Companion to English Literature (Third edition), Entry: The Citizen of the World, Oxford University Press, Oxford Reference Online. (Accessed May 26, 2014)

Our greatest glory is, not in never falling, but in rising every time we fall.

A different phrasing of the maxim was included in the twenty-second letter:

True magnanimity consists not in NEVER falling, but in RISING every time we fall.

QI has located no substantive evidence that the ancient sage Confucius constructed this saying in either form, and QI believes that Goldsmith crafted it. However, the context of these simulated exotic letters led many readers to believe that the author was relaying aphorisms from China. Indeed, the introductory note for the seventh letter specifically referred to Confucius:

The Editor thinks proper to acquaint the reader, that the greatest part of the following letter seems to him to be little more than a rhapsody of sentences borrowed from Confucius, the Chinese philosopher.

Yet, by 1831 the saying had been reassigned to Confucius. In later years, the phrasing evolved, and the adage was attributed to a variety of individuals including Ralph Waldo Emerson. In modern times, there is evidence that both Vince Lombardi and Nelson Mandela used the expression. Details for these citations are given further below.