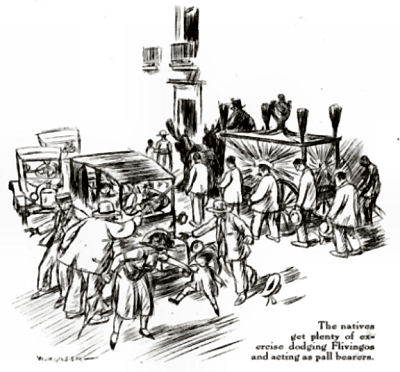 END_OF_DOCUMENT_TOKEN_TO_BE_REPLACED

Dear Quote Investigator: Friends know I am an avid golfer and recently a book of quotations about the sport was given to me as a present. This quote from Winston Churchill captures the exasperation I feel when attempting to chip my ball near to the pin [GBGQ]:

Golf is a game whose aim is to hit a very small ball into an even smaller hole, with weapons singularly ill-designed for the purpose.

When I tried to determine when Churchill uttered this assessment I discovered that some people think former President Woodrow Wilson was really responsible for the saying. Maybe you can resolve this question?

Quote Investigator: Variants of this saying have been attributed to both Churchill and Wilson for decades, but the earliest example located by QI occurred in 1892 in the famed London humor magazine Punch. The article “Confessions of a Duffer” by an unnamed contributor included a version of the quotation that used somewhat different phrasing [PLDG]:

Almost everybody now knows that Golf is not Hockey. Nobody runs after the ball except young ladies at W-m-n! The object is to put a very small ball into a very tiny and remotely distant hole, with engines singularly ill adapted for the purpose.

The term with deleted letters: “W-m-n” may have referred to Wimbledon, London. In May 1891 a membership group of 145 women opened their own nine-hole golf course on Wimbledon Common land [RWGC]. The term “engines” referred to the golf clubs used to propel the ball around the course as shown in the following:

There are many engines. First there is the Driver, a long club, wherewith the ball is supposed to be propelled from the tee, a little patch of sand.

END_OF_DOCUMENT_TOKEN_TO_BE_REPLACED

Dear Quote Investigator: I love to play golf, but sometimes when I am playing poorly I am tempted to simply walk the course and get some exercise. When I mentioned this to a friend he told me that Mark Twain said: “Golf is a good walk spoiled.” This sounds like Twain to me, but did he really say it?

Quote Investigator: Mark Twain was probably not responsible for this barb. The earliest attribution to Twain located by QI appeared in “The Saturday Evening Post” of August 1948.[1] 1948 August 28, Saturday Evening Post, Volume 221, Issue 9, Golf’s Own Home Town by Allan A. Michie, Start Page 32, Quote Page 32, Saturday Evening Post Society, Indianapolis, Indiana. (Ebsco) But Twain died in 1910, so this is a suspiciously late citation with minimal credibility.

The earliest appearance of the quip located by QI occurred in a newspaper in Enniscorthy, Ireland in April 1901. The author of the article was only identified as “a northern Gael”. Boldface added to excerpts by QI:[2] 1901 April 20, Enniscorthy Guardian, Sporting – Gaelic (From a northern Gael), Quote Page 4, Column 6, Enniscorthy, Wexford County, Republic of Ireland. (British Newspaper Archive)

I am not a lover of the snobbish game of cricket, neither would I care to see our Irish boys disporting themselves at the aristocratic game of lawn tennis, not to mention golf, which is a good walk spoiled.