Dear Quote Investigator: The leaders of a group often face a variety of criticisms. Harsh detractors employ a vivid metaphor from the domain of mental health. Here are two examples:

This barb has often been aimed at Hollywood. Would you please explore the provenance of this expression?

The classic comment of the occasion came from Richard Rowland, then head of Metro Pictures Corporation. He received the interesting tidings from Arthur James, press and intelligence agent of Metro. Rowland meditated on the significance of the new move for almost a full second.

“So,” he remarked, “the lunatics have taken charge of the asylum.”

It should be added, lest there be an assumption that the comment sprang from snobbery, that Rowland has been philosopher enough to classify himself as “one of the accidentally successful.”

END_OF_DOCUMENT_TOKEN_TO_BE_REPLACED 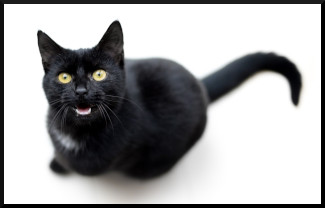 Dear Quote Investigator: Encountering a black cat may bring you good luck or bad luck according to a complicated rule dictated by superstitious beliefs. The nature of the omen depends on whether the cat was traveling from left to right or the reverse. It also depends on whether the cat was moving toward you or away. I prefer the simple analysis credited to the famous comedian Groucho Marx:

Did Groucho really say this? I have been unable to find a solid citation. Would you please help?

Quote Investigator: This question is difficult to resolve. The earliest citation found by QI occurred in January 1931 when the quip was ascribed to the popular actor Jack Oakie. Yet, in July 1931 the joke was credited to Groucho Marx. Currently, Oakie is the leading candidate for authorship although future research may switch the attribution.

Oakie, you know, doesn’t believe in signs and superstitions and has drawn up a list of good and bad signs which can’t fail. Here are a few of them:

“Thirteen is unlucky at a dinner when the host has only twelve chops.

The original phrasing of the black cat joke differed a bit from the common modern version.