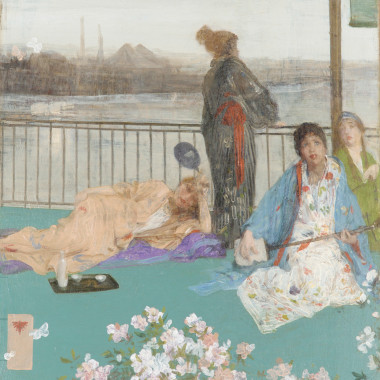 Question for Quote Investigator: Being consistent is important in life. Yet, additional knowledge and experience motivates new thoughts and behaviors. The following adage criticizes the straitjacket of excessive consistency:

Consistency is the last refuge of the unimaginative.

The famous Irish wit Oscar Wilde has received credit for this saying. Would you please explore this topic?

Reply from Quote Investigator: In 1885 Oscar Wilde published an essay about the prominent painter James McNeill Whistler in “The Pall Mall Gazette” of London. Wilde contended that the philosophy of painting propounded by Whistler was inconsistent with the artworks he was creating. But Wilde was eager to forgive this lapse. Boldface added to excerpts by QI:[1]1885 February 28, The Pall Mall Gazette, The Relation of Dress To Art: A Note in Black and White on Mr. Whistler’s Lecture by Mr. Oscar Wilde, Quote Page 4, Column 2, London, England. (British … Continue reading

Nor do I feel quite sure that Mr. Whistler has been himself always true to the dogma he seems to lay down, that a painter should only paint the dress of his age, and of his actual surroundings: far be it from me to burden a butterfly with the heavy responsibility of its past: I have always been of opinion that consistency is the last refuge of the unimaginative: but have we not all seen, and most of us admired, a picture from his hand of exquisite English girls strolling by an opal sea in the fantastic dresses of Japan? Has not Tite-street been thrilled with the tidings that the models of Chelsea were posing to the master, in peplums, for pastels?

Whatever comes from Mr. Whistler’s brush is far too perfect in its loveliness, to stand, or fall, by any intellectual dogmas on art, even by his own: for Beauty is justified of all her children, and cares nothing for explanations.

END_OF_DOCUMENT_TOKEN_TO_BE_REPLACED

Dear Quote Investigator: A rapidly created artwork may still be quite valuable. An anecdote illustrating this point features Pablo Picasso and a pestering art lover. Would you please explore whether this tale is authentic or apocryphal?

It always reminds me of the story about the woman who approached Picasso in a restaurant, asked him to scribble something on a napkin, and said she would be happy to pay whatever he felt it was worth. Picasso complied and then said, “That will be $10,000.”

“But you did that in thirty seconds,” the astonished woman replied.

“No,” Picasso said. “It has taken me forty years to do that.”

Picasso died in 1973; hence, the above citation provides only weak evidence. Interestingly, a thematically similar remark was made by the well-known painter James McNeill Whistler during court testimony in 1878. Whistler was asked by a lawyer about the stiff price he had set for an artwork he had created in two days:[2] 1890, The Gentle Art of Making Enemies by James McNeill Whistler, Chapter: The Action, Quote Page 3 thru 5, John W. Lovell Company, New York. (HathiTrust Full View) link

“Oh, two days! The labour of two days, then, is that for which you ask two hundred guineas!”

“No;—I ask it for the knowledge of a lifetime.”

More information about the Whistler quotation is available here.

END_OF_DOCUMENT_TOKEN_TO_BE_REPLACED

Dear Quote Investigator: According to legend a famous painter once created a work of art in a very rapid and seemingly slipshod fashion. Yet the price assigned to the piece was exorbitant. The artist was asked why the price of the painting was so large when the time expended in its construction was so small. The reply was something like:

I am not asking this high price for a brief amount of work. I ask it for the knowledge gained during the efforts of a lifetime.

I have heard versions of this anecdote referring to James McNeill Whistler and Pablo Picasso. Would you please examine this topic?

Quote Investigator: In 1877 James McNeill Whistler exhibited several paintings including “Nocturne in Black and Gold” at the Grosvenor Gallery in London which was operated by Sir Coutts Lindsay and his wife. The famous art critic John Ruskin’s evaluation was extraordinarily harsh; the prices were absurdly high, and the technique was crude he maintained. Emphasis added to excerpts by QI:[1]1879, The Annual Register: A Review of Public Events at Home and Abroad for the Year 1878, Part II, Remarkable Trials: Whistler v. Ruskin, Start Page 215, Quote Page 216 and 217, Rivingtons, London. … Continue reading

For Mr. Whistler’s own sake, no less than for the protection of the purchaser, Sir Coutts Lindsay ought not to have admitted works into the gallery in which the ill-educated conceit of the artist so nearly approached the aspect of wilful imposture. I have seen and heard much of cockney impudence before now, but never expected to hear a coxcomb ask two hundred guineas for flinging a pot of paint in the public’s face.

Whistler believed that Ruskin’s remarks were libelous, and he initiated a court case against the critic. In 1878 “The Times” of London wrote about the trial and described Whistler’s testimony. The painter admitted that “Nocturne in Black and Gold” was completed quickly, but he believed it was still quite valuable:[2] 1878 November 26, The Times, Whistler v. Ruskin: Before Baron Huddleston and a Special Jury, Quote Page 9, Column 2, London, England. (The Times Digital Archive of Gale Cengage)

Of course, he expected that his pictures would be criticized. The “Nocturne in Black and Gold” he knocked off in a couple of days. He painted the picture one day and finished it off the next. He did not give his pictures time to mellow, but he exposed them in the open air, as he went on with his work, to dry. He did not ask 200 guineas for two days’ work; he asked it for the knowledge he had gained in the work of a lifetime.

Whistler prevailed at trial, but the jury awarded him only the nominal sum of one farthing. In addition, the judge did not allow Whistler to recover the costs he incurred while arguing the lawsuit.

Whistler published a transcript of his remarks during the trial within his 1890 book “The Gentle Art of Making Enemies”. See further below to read that text.

A thematically similar anecdote about Pablo Picasso is also circulating, and information about that topic is available here. Another pertinent tale called “Knowing where to tap” is examined here.

END_OF_DOCUMENT_TOKEN_TO_BE_REPLACED

Dear Quote Investigator: I would like to learn more about a famous anecdote involving James McNeill Whistler, the painter who is known for his iconic portrait of his mother. Apparently, Whistler was able to trump Oscar Wilde, one of the greatest wits of the nineteenth century who was occasionally accused of appropriating the clever expressions spoken by others.

During a party Whistler made a humorous remark and the following statements were exchanged:

Oscar Wilde: I wish I had said that.
James McNeill Whistler: You will, Oscar, you will.

The accounts of this story I have read were written after the death of Oscar Wilde in 1900. Do earlier reports exist? Also, what was the quip that inspired Wilde’s compliment?

Quote Investigator: The earliest evidence known to QI was published in January 1886 in “The Sunday Herald” of Boston, Massachusetts. James McNeill Whistler was planning to visit the United States and conduct a lecture tour. William M. Chase, a friend of Whistler’s, was asked about the content of the forthcoming lectures and responded with caustic words about Oscar Wilde. The article included a version of the anecdote. Boldface has been added to excerpts:[1]1886 January 24, The Sunday Herald (Boston Herald), J. M’Neill Whistler: The London Artist Coming to America to Lecture, Quote Page 14, Column 7, Boston, Massachusetts. (The spelling … Continue reading

“Was his talk on art similar in any respect to Mr. Wilde’s?”

“Well, as Oscar Wilde cribbed from Whistler almost everything he said in his lecture here about art that was worth saying, there may be some remote resemblance between the two lectures as to their matter, but that is certainly all.”

Whistler pricked this bubble of Wilde very neatly and epigrammatically at a Paris salon last season presided over by a well known and popular lady. Whistler had been notably witty during the evening and finally made a bon mot more than usually pointed and happy that convulsed his listeners.

Wilde, who was present, approved Mr. Whistler’s brightness, and wondered why he had not thought of the witticism himself. ‘You will,’ promptly replied Whistler, ‘you will.’ This lightning comment on Mr. Wilde’s wonderful ability to think of other people’s bright things and to repeat them as his own had, you may imagine, an immediate and most discomforting effect on Mr. Wilde.

Thanks to top researcher Stephen Goranson who located the above citation.

In May 1886 a version of the Wilde and Whistler anecdote was printed in a Wichita, Kansas newspaper. This instance was very similar to one given in “The Sunday Herald” above. The text was extracted from the longer article and slightly condensed.[2] 1886 May 12, Wichita Daily Eagle, Wit and Humor: Mr. Whistler and Oscar Wilde, (Acknowledgement to The Argonaut), Quote Page 4, Column 2, Wichita, Kansas. (Chronicling America)

A Boston artist tells this story of Whistler and Oscar Wilde, who has the reputation of borrowing Whistler’s bright speeches. Having heard the artist say an unusually good thing Oscar exclaimed, deploringly: “I wish I could have said that.” “Oh,” replied Whistler derisively, “but you know you will say it.”

This short description did not specify the comment initially made by Whistler, and most early descriptions were similarly incomplete. The precise phrasing of Whistler’s rejoinder was variable. Intriguing versions of the tale were published years later; in 1913 Douglas Sladen published an instance and claimed that he was present when the words were spoken. Sladen stated that the witticism that inspired Wilde’s initial compliment was spoken by a “pretty woman”. In 1946 a biographer named Hesketh Pearson presented another interesting example of the anecdote. The details of these cites are given further below.