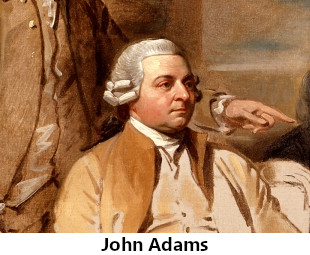 Adams was skeptical of direct democracy. He favored a representative republic structure in which the people elected representatives to a legislature. Adams was the second president of the U.S. from 1797 to 1801. The papers of Thomas Jefferson included an interesting anecdote that occurred during Adams’s presidency. Boldface added to excerpts by QI:[1]1829, Memoir, Correspondence, and Miscellanies, from the Papers of Thomas Jefferson, Edited by Thomas Jefferson Randolph, Volume 4, Entry date: January 1799, Quote Page 509, F. Carr and Company, … Continue reading

Thus, this story was transmitted through two intermediaries before it reached the ears of Jefferson. A footnote accompanying this passage which is available at the “Founders Online” website of the U.S. National Archives identifies the intermediaries.[2]Website: Founders Online, Title: Notes on Comments by John Adams, [1–14 January 1799], Footnote for “Dr. Ewen”. Website description: In 2010, the U.S. National Archives entered into a … Continue reading “Ewen” was an alternative spelling of “Ewing”, and “Dr. Ewen” referred to John Ewing. John Hurt was a former chaplain of Virginia who was a political supporter of Jefferson.