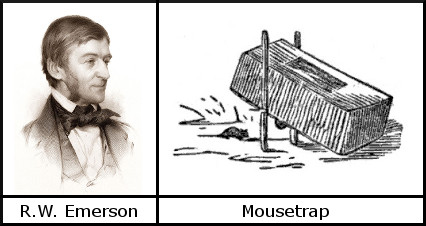 Quote Investigator: The earliest strongly matching statement located by QI was published in “The Atlanta Constitution” of Atlanta, Georgia on May 11, 1882 in a section called “Current Comment”. Boldface has been added to excerpts:[1] 1882 May 11, Atlanta Constitution, Current Comment: The Value of Good Work: Ralph Waldo Emerson, Quote Page 4, Column 4, Atlanta, Georgia. (ProQuest)

Emerson died on April 27, 1882, so the above passage was ascribed to him shortly after his death. In the following days, months, and years the quotation appeared in a wide variety of periodicals and books together with the acknowledgement. For example, on May 15, 1882 the text along with Emerson’s name was printed in “The Cincinnati Enquirer” of Cincinnati, Ohio.[2] 1882 May 15, The Cincinnati Enquirer, Personal, Quote Page 4, Column 4, Cincinnati, Ohio. (Newspapers_com) On May 19, 1882 it was reprinted in the “The Decatur Daily Republican” of Decatur, Illinois.[3] 1882 May 19, Decatur Daily Republican, Tea-Table Talk, Quote Page 2, Column 2, Decatur, Illinois. (Newspapers_com)

An exact match for the passage above has never been found in the published writings or personal journals of Emerson. However, a solid thematic match was written in his journal dated 1855 in a section about “Common Fame”. A mousetrap was not mentioned; instead, other goods and services were specified:[4]1912, Journals of Ralph Waldo Emerson with Annotations, Edited by Edward Waldo Emerson and Waldo Emerson Forbes, 1849-1855, Volume 8, Year Specified for Journal Entry: 1855, Quote Page 528, Published … Continue reading

RALPH WALDO EMERSON has uttered volumes of wise sayings. One of his aphorisms, which expresses a world of meaning is the following: “If a man can write a better book, preach a better sermon, or make a better mouse-trap then his neighbors, though he builds his house in the woods, the world will make a beaten path to his door.”

His life was good and useful, and he strove
To spare whate’er he could of irksome labor;
In short, none ever knew him but to love—
He made a better mouse-trap than his neighbor!
—Courier-Journal.

Let some of those people who are forever bemoaning their obscurity ponder these words of Emmerson: . . .

If a man can write a better book, preach a better sermon, or make a better mouse-trap, than his neighbor, though he builds his house in the woods, the world will make a beaten path to his door.
—Emerson

In June 1901 a school for teachers called the Cleveland Kindergarten Training School held graduation exercises. Mrs. J. N. Crouse who was an associate principal of the Chicago Kindergarten College delivered an address to the graduates, and she used the modified phrase “build a better mouse-trap”:[10] 1901 June 14, Cleveland Leader, As Teachers of Children, Quote Page 10, Column 3, Cleveland, Ohio. (GenealogyBank)

Mrs. Crouse closed her address with the following quotation from Emerson: “If a man can write a better book, preach a better sermon, or build a better mouse-trap than his neighbor; though he build him a house in the woods, yet will all the world make a beaten path to his door.”

In November 1908 Elbert Hubbard, the charismatic founder of the Roycroft artisan community in New York, edited and published an issue of “The Fra: A Journal of Affirmation” which included an instance of the saying credited to Emerson:[11]1908 November, The Fra: A Journal of Affirmation, Volume 2, Number 2, Editor and Publisher Elbert Hubbard, (Filler item), Quote Page iii, Column 2, Published by The Roycrofters, East Aurora, New … Continue reading

If a man can write a better book, preach a better sermon or make a better mouse trap than his neighbor, though he build his house in the woods, the world will make a beaten path to his door.—Emerson.

Different versions of the saying continued to evolve in parallel with the original statement. For example, in June 1909 a newspaper article in Garnett, Kansas emphasized the need to advertise and included the following more concise instance:[12] 1909 June 25, Garnett Journal, Another Case of Evolution, Quote Page 1, Column 2, Garnett, Kansas. (Newspapers_com)

For many years business men throughout the country consoled themselves with Emerson’s familiar quotation, “If a man build a better house or a better mouse trap than his competitor, the world will make a beaten path to his door though he set up in the wilderness.”

This famous quotation is still true to a certain extent, but cannot cover the many deficiencies in the old time way of doing business. In this day and age, the better the “mouse trap” the more the man should and does advertise it.

In March 1911 “The Washington Times” newspaper of Washington D.C. reported on an effort propelled forward by two members of the prestigious Cosmos Club in the city to explore the provenance of the saying. Several individuals had examined the writings of Emerson, and the “mouse trap” adage was not located.

Since Elbert Hubbard had published the saying he was contacted and asked about its origin. He sent an odd reply:[13]1911 March 10, The Washington Times, Two Make Claim To Famous Saying: Members of Cosmos Club Find, After Long Search, “Beaten Path” Quotation Is Credited to Elbert Hubbard and Also a … Continue reading

Mr. Hubbard answered that he wrote it while imbued with the spirit of Emerson.

The newspaper also stated that another candidate for authorship had emerged. A circular from the West Publishing company in St. Paul, Minnesota suggested that an unnamed person in the publishing industry might have coined the adage. In fact, the “West Publishing Company’s Docket” published a series of articles in 1911 and 1912 investigating the “mouse trap” quotation, but the words were not assigned to a member of the company. The February 1912 article in “The Docket” will be discussed further below.

In May 1911 Hubbard published another issue of “the Fra”, and it included an advertisement for a forthcoming collection of distilled wisdom from the pen of the East Auroran aphorist titled “A Thousand and One Epigrams”. The advertisement contained an elaborate and implausible story about the construction of the quotation:[14]1911 May, The Fra: Exponent of The American Philosophy, Volume 7, Number 2, Editor and Publisher Elbert Hubbard, (Advertisement for forthcoming book titled “A Thousand and One Epigrams”), … Continue reading

Mr. Hubbard, like all writers of epigrams, has attributed some of his good Class A product to other writers. For instance, he was once writing about The Roycrofters, and having in mind the number of visitors who come to see us, he wrote this: “If a man can write a better book, preach a better sermon, or make a better mousetrap than his neighbor, though he build his house in the woods the world will make a beaten path to his door.”

It was a little strain on his ego to let this thing go under his own stamp, so he saved his modesty and at the same time gave the epigram specific gravity, by attributing it to one Ralph Waldo Emerson.

The world took it up, and Emerson’s writings have been scoured with fine-tooth combs in the endeavor to locate this particular epigram, when it is simply one of the things that Emerson would have said if it had occurred to him.

In February 1912 “The Mousetrap Quotation: The Verdict” was published in “West Publishing Company’s Docket”. The article reviewed the available evidence concerning the adage. The earliest citation widely known at that time was the book of quotations compiled in 1889 titled “Borrowings”. The woman responsible for gathering the adage was identified as Sarah S. B. Yule. She was contacted, and her testimony was shared in the article. Yule stated that she wrote the words down when she attended a lecture by Emerson:[16]1912 February, West Publishing Company’s Docket, The Mousetrap Quotation: The Verdict, Start Page 651, Quote Page 651, Published by West Publishing Company, St Paul, Minnesota. (Google Books … Continue reading

To the best of my memory and belief, I copied it in my handbook from an address delivered long years ago, it being my custom to write everything there that I thought particularly good, if expressed in concise form; and when we were compiling ‘Borrowings’ I drew from this old handbook freely. It will seem strange to you, as it does to me, that Emerson never incorporated this in any of his essays. He did use the thought and similar wording, but never exactly the wording, of the quotation I used in ‘Borrowings.’

In May 1915 “The Literary Digest” explored the provenance of the quotation in a section called “The Lexicographer’s Easy Chair”. The columnist noted that the saying had been attributed to the Reverend John R. Paxton who was the former pastor of the West Presbyterian Church of New York City. Researchers had found no strong matches for the saying. Yet, there was a pertinent thematic match that may have produced some confusion:[17]1915 May 15, The Literary Digest, Volume 50, Number 20, The Lexicographer’s Easy Chair: A “Mouse-trap” Quotation, Start Page 1196, Quote Page 1196, Published by Funk & Wagnalls … Continue reading

A man can’t be hid. He may be a pedler in the mountains, but the world will find him out to make him a king of finance. He may be carrying cabbages from Long Island, when the world will demand that he shall run the railways of a continent. He may be a grocery man on the canal, when the country shall come to him and put him in his career of usefulness.

In conclusion, QI thinks that Ralph Waldo Emerson’s 1855 journal entry may safely be ascribed to him. QI also believes that it is reasonable to ascribe the text in the May 11, 1882 citation to Emerson although the evidence is indirect.

The preponderance of evidence does not support any ascription to Elbert Hubbard. He did help to popularize the adage, and initially he did credit Emerson.

Image Notes: Portrait of Ralph Waldo Emerson engraved and published by S. A. Schoff from the Library of Congress via Wikimedia Commons. Mousetrap illustration from page 43 of “The Art of Hunting, Trapping and Fishing”; copyright 1875; published by Hurst & Company, New York. Images have been cropped, retouched, and resized.