Dear Quote Investigator: After the enormously successful debut of a comedy by Oscar Wilde the audience demanded that the playwright deliver a few words. His speech included a comically self-congratulatory line that was similar to the following:

You think almost as highly of the play as I do myself.

Would you please help me to locate a citation and determine precisely what Wilde said?

Quote Investigator: On February 22, 1892 “The Morning Post” of London printed a review of Oscar Wilde’s new play “Lady Windermere’s Fan” which the paper said “was received with great favour”. The curtain was “thrice raised”, and the theatergoers were eager to hear remarks from Wilde. He began as follows:[1] 1892 February 22, The Morning Post, St. James’s Theatre, Quote Page 2, Column 5, London, England. (British Newspaper Archive)

Ladies and Gentlemen, I believe it is the privilege of an author to allow his words to be reproduced by others while he himself remains silent. But, as you seem to wish to hear me speak, I accept the honour you are kind enough to confer upon me.

Wilde praised George Alexander who produced the show and the performers who brought the story to life. Emphasis added to excerpts by QI:

I have to thank them one and all for the infinite care they have taken to fill in every detail until the sketch has become a finished picture. I think that you have enjoyed the performance as much as I have, and I am pleased to believe that you like the piece almost as much as I do myself.

The newspaper stated that Wilde’s comments “were received with hearty laughter and applause”. Over the years different versions of Wilde’s speech have been presented, however, QI believes that this contemporaneous account probably provided the most accurate transcription.

In his impromptu speech—quite a new thing for an author to indulge in, though he was loudly called upon to address the house—Mr. Wilde said he thought the audience enjoyed the performance as much as he had, and he added he was pleased to believe that they liked the piece almost as much as he did himself. This was expecting, perhaps, the impossible; but Mr. Wilde, after thus expressing himself, languidly retired into the darkness, still smoking his cigarette. 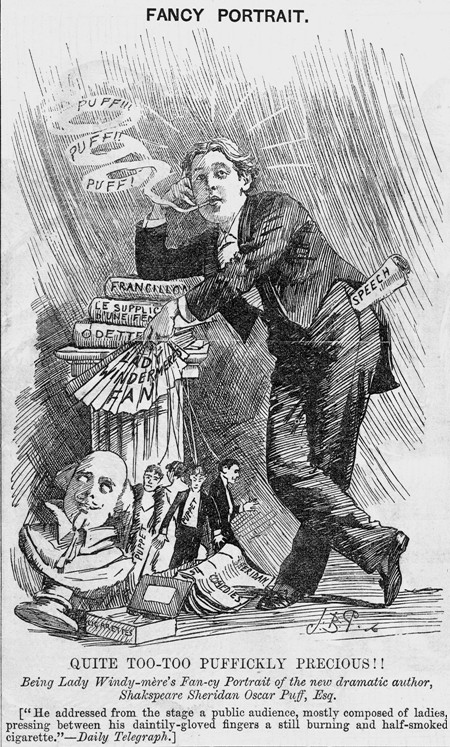 The prominent English painter Louise Jopling who was one of Wilde’s friends attended the first night of “Lady Windermere’s Fan”, and in her book “Twenty Years of My Life” she commented on Wilde’s words after the performance:[4]1925 (First publication), Twenty Years of My Life: 1867 to 1887 by Louise Jopling (Mrs. Jopling-Rowe), Quote Page 81, John Lane, London. (2015 Online Edition from University of Glasgow, Scotland; … Continue reading

The enthusiastic and unanimous call for the author produced Oscar smoking a cigarette! This act of his incensed many people, particularly as he reversed the usual attitude the author takes when he appears before the public, for, instead of thanking them for the kind reception they had awarded his play, he congratulated them on their good fortune in having such a play to listen to!

In 1946 Hesketh Pearson included a version of the speech in the biography “Oscar Wilde: His Life and Wit”. Pearson acquired his information via the producer Alexander who stated that a staff member at the theater employed shorthand and even recorded the stressed words:[5] 1946, Oscar Wilde: His Life and Wit by Hesketh Pearson, Chapter 14: The Dramatist, Quote Page 199, Harper & Brothers, New York. (Verified with hardcopy)

“Ladies and Gentlemen: I have enjoyed this evening immensely. The actors have given us a charming rendering of a delightful play, and your appreciation has been most intelligent. I congratulate you on the great success of your performance, which persuades me that you think almost as highly of the play as I do myself.”

The stressed words were: immensely, charming, delightful, most, great, and almost.

In conclusion, QI believes that the text in “The Morning Post” on February 22, 1892 provides the best available transcription of Oscar Wilde’s remarks. The text in Hesketh Pearson’s biography is valuable, but its accuracy is less certain because it appeared decades after the event.

(Great thanks to researcher John Cooper who told QI about the article in “The Morning Post” and other citations while signaling the value of this topic.)