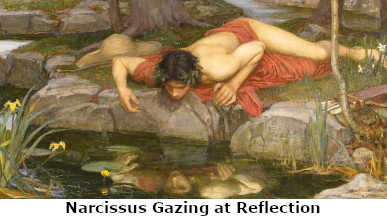 Dear Quote Investigator: If you are attending a soporific party, and the host asks whether you are content you might reply with the following comically self-absorbed zinger attributed to the famous Irish wit Oscar Wilde:

“Are you enjoying yourself, Mr. Wilde?”
“Enormously, Madam, there’s nothing else to enjoy.”

This same quip has been attributed to the prominent Irish playwright George Bernard Shaw:

“Are you enjoying yourself, Mr. Shaw?”
“Yes—and that’s the only thing I am enjoying.”

Are either of these exchanges genuine? Would you please explore this topic

Quote Investigator: The evidence supporting an ascription to either Wilde or Shaw is weak.

The humor of this rejoinder rests on verbal ambiguity. The host’s inquiry “Are you enjoying yourself?” typically means “Are you experiencing enjoyment via conversation with fellow partygoers and via consuming the refreshments?”. The humorously contorted interpretation is “Are you deriving enjoyment from experiencing your own being?”

Wrapped in his own originality: Young Goldy sat by himself in the corner, meditatively twirling his moustache, not noticing anybody and noticed by none. He was finally spied out by Brown, who approached and said, “You don’t seem to be enjoying yourself, Goldy, my boy.” “Oh, yes, I am,” replied Goldy in a languid manner: “enjoying myself hugely, old fellow; but kill me if I am enjoying any of these people, you know.”—Boston Transcript.

The identity of the joke creator was not given in “The Times”. It might be specified in the “Boston Transcript”, but QI has not yet seen the original context. Currently, the creator is anonymous. The same passage was reprinted in other newspapers in 1883 such as “The Times-Democrat” of New Orleans, Louisiana:[2] 1883 January 12, The Times-Democrat, All Sorts, Quote Page 3, Column 6, New Orleans, Louisiana. (Newspapers_com)

At the Reception. Brown (to Theodore, sitting by himself, twirling his moustache)—“You seem to be enjoying yourself, old boy.” Theodore—“Enjoying myself hugely, but hang me if I’m enjoying any of these people.”—Boston Transcript.

While the Admiral was digesting this hasty meal of philosophy General Miles passed in review, a spectacle of impressive dignity. When the tail of the seeming procession had passed and the two observers had recovered from the transient blindness caused by its effulgence—-

“He seems to be enjoying himself,” said the Admiral.

“There is nothing,” assented Joy, thoughtfully, “that he enjoys one-half so well.”

I suppressed all yawns, endeavored to stimulate a polite if not keen interest and failed to give the worthy Colonel the impression that I was enjoying myself.

So when he asked me if I were doing so, I said: “Yes, indeed, Colonel” … and added, “It is the only thing I am enjoying” … whereat he laughed, commended my bluntness, which matched his own.

Next time your hostess asks if you are enjoying yourself (and you’re not) why don’t you try G.B.S.’s famous answer to the same question: “Yes—and that’s the only thing I am enjoying.”

SHAWT STORY: George Bernard Shaw was the guest of honor at one of those teejuss poddys held for the purpose of lionizing him. During the evening the hostess cooed: “Are you enjoying yourself?” “Yes,” flipped Shaw, “but that’s the only thing I am enjoying!”

“You Look, Mr. Shaw, as though you were enjoying yourself at this party.”
“I’m glad I do, because it’s the only thing I am enjoying.”
–Contributed by Kenneth Horan

It is related of Oscar Wilde that he was standing aloof at a party when his hostess came up to him and asked him anxiously:
“Are you enjoying yourself, Mr. Wilde?”
“Yes, I am,” he said. “There is nothing else here to enjoy.”

In conclusion, this family of jokes is difficult to trace because the phrasing is highly malleable. A member of the family appeared in the “Boston Transcript” of Massachusetts by 1883. The creator remains unidentified at this time. Percival Christopher Wren placed an instance in his novel “Beau Ideal” by 1927. George Bernard Shaw was given credit by 1939, but QI has found no direct evidence that he employed the quip. Oscar Wilde implausibly received credit by 1977.

Image Notes: Mythical figure Narcissus gazing at his own reflection; image cropped from the painting “Echo and Narcissus” by John William Waterhouse circa 1903; image accessed via Wikimedia Commons.

(Great thanks to Nigel Rees whose inquiry led QI to formulate this question and perform this exploration. Rees asked about this topic in the January 2019 issue of “The ‘Quote…Unquote’ Newsletter”. Special thanks to Jesse Sheidlower and Stephen Goranson for help verifying the 1927 “McClure’s” citation. Thanks to Thomas Fuller for pointing to the pertinent 1911 quotation in “The Devil’s Dictionary”. Also, thanks to discussants Sue Watkins, T. F. Mills, and Dennis Lien. Thanks to Kevin T. Ryan for pointing out an error in the description of George Bernard Shaw which has now been corrected.)

Update History: On June 11, 2020 the description of George Bernard Shaw was changed to “Irish playwright”.