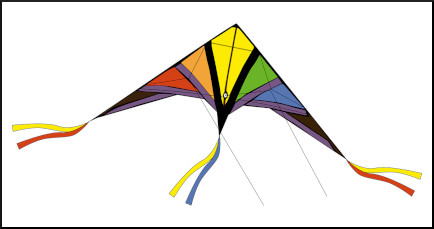 Quote Investigator: This saying is not present in the comprehensive quotation collection “In His Own Words: Churchill By Himself” compiled by Richard M. Langworth.[1]2013 (Kindle Edition), In His Own Words: Churchill By Himself by Winston S. Churchill, Compiled and edited by Richard M. Langworth, (No search match for “kite” or “kites”) … Continue reading Churchill died in 1965 at age 90, and QI has located attributions to the statesman starting in 1963. However, the origins of the saying are much older than this.

A school boy thus, to sport inclin’d,
Must drag his kite against the wind,
A long way ere he makes it rise
TO SCRAPE ACQUAINTANCE WITH THE SKIES!

Controversy and opposition is the element in which he lives, and his talent, like a paper kite, seems only to rise when dragged against the wind.

In March 1828 the statement above was further disseminated when an excerpt from the article was reprinted in “The Morning Chronicle” of London.[6] 1828 March 27, The Morning Chronicle, Don Miguel’s Court Preacher, Quote Page 3, Column 3, London, England. (Newspapers_com)

They knew that the determined spirit of their countrymen rises highest, like a paper kite, when dragged against the wind, but they were not prepared to keep it up in a threatened tempest, and therefore withdrew their hand when they saw the storm approach.

In 1846 John Neal’s essay appeared in the “Weekly Mirror” of New York City and the “Portland Weekly Advertiser” of Maine as mentioned previously.

In the words of that pithy writer, John Neal, “Good voyages are made both ways. A certain amount of opposition is a great help to a man. Kites rise against, not with the wind. Even a head wind is better than nothing. No man ever worked his voyage any where, in a dead calm.”

In 1857 a short item in a Colchester, England newspaper employed the kite figuratively to make a different point concerning the necessity of stability in life:[9] 1857 April 22, The Essex Standard, Scrapiana, Quote Page 4, Column 7, Colchester, England. (Newspapers_com)

Every school-boy knows that a kite would not fly unless it had a string tying it down. It is just so in life. The man who is tied down by half-a-dozen responsibilities, and their mother, will make a higher and stronger flight than the bachelor, who, having nothing to keep him steady, is always floundering in the mud. If you want to ascend in the world tie yourself to somebody.

The man or the organization that has merit and capacity for good is helped by a certain amount of opposition. Large birds rise against the wind, not with it. A fine ship makes little progress in a dead calm. A stiff breeze purifies the atmosphere, supplying life-given principles. Man never shows his latent force until opposition faces his darling schemes.

A kite can only rise against the wind. The best thing in a young man’s life is often adversity. To overcome this he must develop strength and manhood.

Kites rise highest against strong winds, and men attain the greatest eminence as they surmount the greatest difficulties.

The aviator “takes off” against the wind and thus more quickly reaches a higher altitude.

The strongest men living started out with everything against them, but, instead of turning their backs, they grit their teeth, clenched their fists and pressed forward.

Kites rise against, not with the wind.—No man ever worked his passage anywhere in a dead calm.—John Neal.

Great happiness, like an able aviator, takes off against a head wind. Drive through your opposition, my friends, until you can feel and hear your heart singing because of your mastery.

In 1955 the syndicated cartoon “Country Parson” printed an illustration of a man watching an airplane accompanied with this caption:[16] 1955 September 6, The Greensboro Record, Country Parson (cartoon caption), The Register and Tribune Syndicate, Quote Page A2, Column 5, Greensboro, North Carolina. (GenealogyBank)

“When everything seems to be goin’ against you, remember that the airplane takes off against the wind, not with it.”

Kites rise highest against the wind—not with it. —(Winston Churchill)

There is an old Chinese proverb, “Kites rise against the wind.” The blast against Sen. Williams illuminates as it elevates his record of complete integrity.

In 1988 a Ridgewood, New Jersey newspaper printed the airplane saying together with an implausible ascription to Henry Ford who had died many years earlier in 1947:[19] 1988 June 16, The Ridgewood News, Quote of the day, Quote Page 1, Column 5, Ridgewood, New Jersey. (Newspapers_com)

Quote of the day “When everything seems to be going against you, remember that the airplane takes off against the wind, not with it.” HENRY FORD
Submitted by Michael Sissler of Glen Rock

A certain amount of opposition is a great help to a man. Kites rise against, not with, the wind.
–Lewis Mumford

In conclusion, John Neal should receive credit for the words he wrote in 1846. The metaphorical framework based on kites and wind evolved over time, and it was in use before Neal crafted his essay. The evidence linking Winston Churchill to this set of expressions is weak. Also, Neal’s essay was written before Churchill was born.

The airplane saying also evolved over time and was probably based on the kite saying. The attribution to Henry Ford is unsupported.

Image Notes: Illustration of kite from OpenClipart-Vectors at Pixabay. Image has been resized and retouched.

(Great thanks to George Thompson who notified QI about a mailing list dialog concerning this family of sayings which led QI to formulate this question and perform this exploration. Nelly Lambert sent a quotation inquiry to a mailing list which was devoted to the 18th Century. John Sullivan replied by pointing to Neal’s 1846 essay “Enterprise and Perseverance” as the source. He also uncovered the 1848 citation. Thanks to Les Booth who asked about the Henry Ford attribution.)