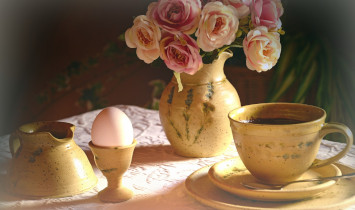 A precursor anecdote without a cartoon illustration appeared in “The Academy” journal in 1875. The creator of the story was unidentified, and the punchline was a bit different. Also, it did not include the claim that parts of the egg were good. Emphasis added to excerpts by QI:[1]1875 July 26, The Academy, Book Review of: “Our Bishops and Deans” by the Rev. F. Arnold (Late of Christ Church Oxford), Start Page 651, Quote Page 652, Column 2, Robert Scott Walker, … Continue reading

On May 22, 1895 “Judy: The London Serio-Comic Journal” published a cartoon with a bishop and curate. This is the first close match located by QI:[2]1895 May 22, Judy: The London Serio-Comic Journal, Scene-Bishop’s Breakfast Table (Single-panel comic showing a Bishop and Curate at a breakfast table), Quote Page 245, London, England. (Gale … Continue reading 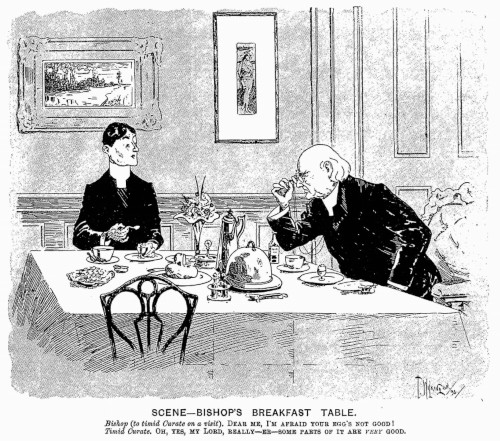 Magazines are usually available to readers before their official cover dates. Thus, on May 21, 1895 the “Huddersfield Chronicle” of Yorkshire, England retold the joke without an illustration while acknowledged “Judy”.[3] 1895 May 21, Huddersfield Chronicle, Cuttings from “Judy”, Quote Page 4, Column 4, Yorkshire, England. (British Newspaper Archive)

Scene: Bishop’s breakfast table.— Bishop (to timid curate on a visit): Dear me, I’m afraid your egg’s not good. Timid Curate: Oh, yes, my lord, really—er—some parts of it are very good. 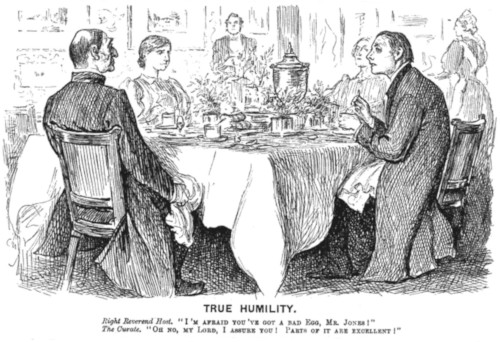 TRUE HUMILITY.
Right Reverend Host. “I’M AFRAID YOU’VE GOT A BAD EGG, MR. JONES!”
The Curate. “OH NO, MY LORD, I ASSURE YOU! PARTS OF IT ARE EXCELLENT!”

On November 20, 1895 an unhappy editor at “Judy” complained about the plagiarism performed by “Punch” and displayed the text of the two versions of the gag side by side:[8] 1895 November 20, Judy: The London Serio-Comic Journal, Masks and Faces: A Coincidence, Start Page 248, Quote Page 249. Column 1 London, England. (Gale 19th Century UK Periodicals)

And I’ve not done with Punch yet. In their issue of November 9th, 1895, they published an illustration by Du Maurier of a joke that was illustrated by Mr. Wilkinson , and published in JUDY, on May 22nd, 1895. I can’t give you the pictures here. I could give you JUDY’S, but not Punch’s; but anyone can see the coincidence for themselves by getting Punch and JUDY of these dates. Here are the “undercuts” :—

In conclusion, the humor of the “curate’s egg” began with an anonymous anecdote circulating by 1875. The magazine “Judy” deserves credit for publishing a cartoon on May 22, 1895 with a punchline containing the distinctive phrase “some parts of it are very good”. The magazine “Punch” published very similar cartoon joke on November 9, 1895 with the punchline phrase “parts of it are excellent”. QI believes that “Judy” should be given priority credit.

Image Notes: Picture of breakfast table showing an egg in an egg cup from Peggychoucair at Pixabay. Image has been resized and cropped.

(Thanks to discussants Laurence Horn, Bill Mullins, John Baker, and Mark Mandel who introduced QI to this topic and provided helpful citations and insights. Many thanks to Stephen Goranson for accessing the May 22, 1895 cartoon in “Judy” and identifying the November 20, 1895 citation. Thanks also to Jeffrey Graf for checking a citation.)