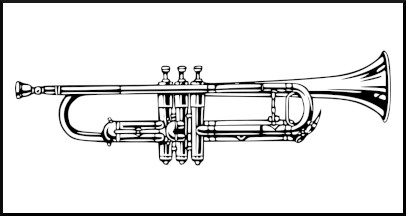 Dear Quote Investigator: What do the following musical instruments have in common: cornet, ukulele, saxophone, bagpipes, accordion, and banjo? Each of these instruments has a distinctive sound that is unpleasant to some listeners providing inspiration for a family of comical insults. Here are three typical barbs:

(1) A true gentleman is someone who knows how to play the bagpipes, and doesn’t.

(2) A considerate person is one who could play a saxophone but doesn’t wish to.

(3) A man who can play the accordion but won’t, is a good neighbor.

The well-known wits Oscar Wilde and Mark Twain have received credit for this kind of quip, but I have been unable to find any supporting citations. Would you please explore this topic?

Quote Investigator: The earliest match located by QI appeared in January 1917 within the pages of “The Atchison Weekly Globe” of Atchison, Kansas. A mellow brass instrument was disparaged by a joke ascribed to a local man named Frank Fiest. Emphasis added to excerpts by QI:[1] 1917 January 25, The Atchison Weekly Globe, Half Minute Interviews, Quote Page 1, Column 7, Atchison, Kansas. (Newspapers_com)

Frank Fiest: “My idea of a gentleman is he who can play a cornet and won’t.” Well said, Mr. Fiest.

Lord Chesterfield had his own crude ideas about what a gentleman should be, but Frank Fiest of Atchison, says a gentleman is a man who can play a cornet but won’t.—Kansas City Star.

OUR idea of a gentleman is a man who can play a ukelele
AND wont.

In 1922 a letter writer in “The News-Sentinel” of Fort Wayne, Indiana reported an instance critical of the saxophone. The tale involved the prominent humorist Will Rogers, but the letter writer indicated that Rogers did not tell the joke; instead, the joke was told to Rogers by his companions:[5]1922 June 20, The News-Sentinel (Fort Wayne News Sentinel), Private Opinions Publicly Expressed, (Letters to the Editor), Politeness: Letter from S.A.W., Quote Page 4, Column 3, Fort Wayne, Indiana. … Continue reading

Then he appeared in person and was asked if he knew the definition of gentleman. He said no so his friends told him. “A gentleman is a man who plays a saxophone but won’t”

Walter Armstrong’s idea of a kind, considerate person is one who could play a saxophone but doesn’t wish to.

Also in 1923 a similar version of the joke was credited to another person in the pages of a Deming, New Mexico newspaper:[7] 1923 March 30, Deming Headlight, (Freestanding short item), Quote Page 7, Column 2, Deming, New Mexico. (NewspaperArchive)

Herman Lindauer’s idea of a kind, considerate person is one who could play a saxophone but doesn’t wish to.

Dr. William M. Lewis, president of George Washington University, who introduced the chief justice, declared that one of his students had furnished him with the definition of a gentleman. A gentleman, according to this, is a man who knows how to play the cornet and doesn’t.

A man who can play the saxophone but won’t, is a good neighbor.

Keeping in mind Dr. Hoxton’s definition of gentleman as “a man who can play the cornet and doesn’t” we advise the depths of Poe’s Ragged Mountains as an excellent spot for all those who have not outgrown the instrument to practise it . . .

Today’s Chuckle
A true gentleman is one who can play the bagpipes—and doesn’t.

“I put my bagpipes in the closet where they belong,” he said, “out of sympathy for my neighbors.”

A newspaper quotation reinforced MacIntosh’s feeling that he had done the right thing. It said: “A gentleman is a fellow who knows how to play the bagpipes, but doesn’t.”

One pro wit defined a gentleman as one who ‘knows how to play an accordion but doesn’t’.

Oscar Wilde who died in 1900 was implausibly connected to a version of the joke in 1991 within the pages of “The Boston Globe” of Massachusetts:[14]1991 March 16, The Boston Globe, Getting your Irish up over St. Patrick by Chris Reidy (Globe Staff), (Continuation title) A nominee to replace St. Patrick, Start Page 9, Quote Page 12, Column 1, … Continue reading

As Oscar Wilde said, “An Irish gentleman is someone who can play the bagpipes but won’t.” That would seem to disqualify any Scottish immigrant.

Mark Twain who died in 1910 was implausibly linked to an instance of the joke by 1993:[15] 1993 March 24, The Tampa Tribune, Section: BayLife, Sometimes you gotta toot your own horn by Roderick Nordell (Christian Science Monitor), Quote Page 1, Column 4, Tampa, Florida. (Newspapers_com)

“A gentleman,” Mark Twain allegedly said, “is someone who knows how to play the saxophone but doesn’t.” By that criterion, as everybody knows by now, Bill Clinton is no gentleman. But he is president of the United States.

A great gentleman, it has been said, is one who knows how to play the banjo but does not.

To quote Mark Twain, “A gentleman is a man who knows how to play the banjo and doesn’t.” That said, wild and crazy guy Steve Martin (below) shares his love for the much-maligned musical instrument in the special “Give Me the Banjo.”

In conclusion, Frank Fiest is currently the top candidate for creator of this family of jokes, and the cornet was the first target. Variants proliferated during the ensuing decades. The ascriptions to Oscar Wilde, Mark Twain, and Will Rogers are unsupported. This article presents a snapshot of contemporary knowledge and ascriptions may shift over time.

Image Notes: Illustration of a cornet from Clker-Free-Vector-Images at Pixabay. Image has been resized.

(Great thanks to Kate Styrsky, Bill Mullins, and Marian T. Wirth whose inquiries led QI to formulate this question and perform this exploration. Styrsky discussed the topic back in April 2011 on the Freakonomics website. Mullins was inspired to ask QI when he encountered a variant joke about card tricks that was mentioned in a forum discussing magic. Wirth tweeted about the topic and mentioned the ukulele variant. Special thanks to Barry Popik who also explored this topic and found valuable citations.)