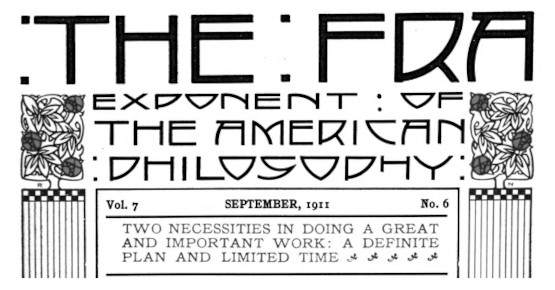 Dear Quote Investigator: Dreaming about accomplishing a vaguely defined magnificent task at some unknown future date is unhelpful. True progress is made by formulating a plan and adopting a clear deadline. This notion has been attributed to U.S. publisher Elbert Hubbard and U.S. composer Leonard Bernstein. Would you please explore this topic.

TWO NECESSITIES IN DOING A GREAT AND IMPORTANT WORK: A DEFINITE PLAN AND LIMITED TIME

If I were trying to condense in a few words the best plan for efficient action, I would say: Have a definite thing to do and a limited time to do it. About fifty per cent of the people engaged in business never reach the point where they set their minds on doing some one definite thing . . .

It is left for the men who decide on a definite thing to do within a limited time, to keep the wheels of progress moving.

Apparently, H.C. Peters developed the core idea, and Elbert Hubbard crafted and popularized a concise statement. Alternatively, Hubbard constructed the adage, and he next asked Peters to write on the subject.

The saying evolved over time, and it was reassigned to Leonard Bernstein by 2002. Yet, Bernstein died in 1990; hence, the current evidence supporting this attribution is rather weak.

Two necessities in doing a great and important work: A definite plan and limited time

We are brothers to all who have trod the earth: brothers and heirs to dust and shade: mayhap to immortality

The best service a book can render you is, not to impart truth, but to make you think it out for yourself

Two necessities required in doing a great and important work are “a definite plan” and “a limited time.”

“It is a fine thing to have ability, but the ability to discover ability in others is the true test.”

“The man who can lose himself in his work is the man who will succeed best.”

“Two necessities in doing a great and important work: A definite plan and limited time.”

In 1940 the saying continued to circulate when a Tucson, Arizona newspaper published the following slightly rephrased instance without ascription:[7] 1940 August 18, The Arizona Daily Star, BITS: A Little o’ This and a Little o’ That, Section: Home, Quote Page 4, Column 7, Tucson, Arizona. (Newspapers_com)

In order to do a great and important work two things are necessary: a definite plan and limited time.

To do a great and important work, two things are necessary—a plan and not quite enough time.

To do a great and important work, two things are necessary—a definite plan, and not quite enough time.
—Nuggets

In 1968 a compendium of quips and quotes assembled by Evan Esar included a variant with “definite idea” instead of “definite plan”. Also, the word “great” was omitted. No ascription was listed:[10] 1968, 20,000 Quips and Quotes by Evan Esar, Topic: Achievement, Quote Page 5 and 6, Doubleday, Garden City, New York. (Verified on paper)

To accomplish something important, two things are necessary: a definite idea, and not quite enough time.

In order to do an urgent and important work, two things are necessary: a definite plan and not quite enough time. (GRIT)

The 1987 collection “Pearls of Wisdom” contained an instance with the word “tasks”:[12]1987 Copyright, Pearls of Wisdom: A Harvest of Quotations from All Ages, Compiled by Jerome Agel and Walter D. Glanze, Quote Page 33, Perennial Library: Harper & Row, New York. (Verified with … Continue reading

To do great and important tasks, two things are necessary: a plan and not quite enough time.
Anonymous

TODAY’S QUOTE: “To achieve great things, two things are needed; a plan, and not quite enough time.” — Leonard Bernstein

In 2006 “Treasury of Wit & Wisdom” from Reader’s Digest included an entry that exactly matched the saying and attribution in the 2002 citation.[14]2006, Treasury of Wit & Wisdom: 4,000 of the Funniest, Cleverest, Most Insightful Things Ever Said, Compiled by Jeff Bredenberg, Topic: Goals and Mind-Set, Quote Page 149, The Reader’s … Continue reading

In conclusion, in 1911 Elbert Hubbard crafted and popularized a concise statement about accomplishing great work. H.C. Peters may have been responsible for the central idea. The phrasing of the adage evolved over many decades. The attribution to Leonard Bernstein occurred after his death and is not well-supported.

Image Notes: Header of the September 1911 issue of the journal “Fra” showing the adage.

(Great thanks to an anonymous individual who read an interview with video game executive Randy Pitchford who attributed the saying to Leonard Bernstein. The resultant inquiry led QI to formulate this question and perform this exploration. Thanks to Barry Popik for his helpful research on this topic. Popik located a 1953 citation for the saying and a 2011 attribution to Bernstein.)