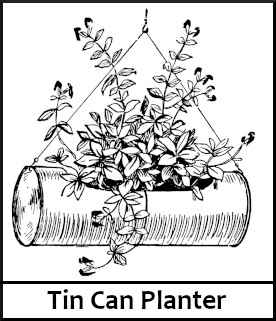 Dear Quote Investigator: The word “can” designates the ability to accomplish a task. “Can” also specifies a container. I recall the following wordplay-based inspirational maxims:

Quote Investigator: The earliest match located by QI appeared in “The Hartford Courant” of Connecticut in 1907. No attribution was specified for this anonymous adage:[1] 1907 November 2, The Hartford Courant, (Advertisement for insurance from The Mutual Benefit Company), Quote Page 08, Column 7, Hartford, Connecticut. (Newspapers_com)

Empty brains and a heart filled with pride often travel together.

Don’t trust to yourself that which can be done better by others.

The ownership of a small home canning outfit involves but a small investment and it is one which the fruit grower will never regret. What others have done, you can do. “Success comes in cans, failures in can’ts”

If he’s a reasonable man show him to me. The Only Harper is the man what knocked the “T” off c-a-n-t. With the “T” knocked off it leaves CAN; and remember success comes in “Cans” only. You CAN trade if you mean business and are reasonable in your demands.

“Success comes in cans not in can’ts,” says some one. But there are no can openers provided.

For our colors we decided on purple and white, with English violet for our class flower. Our motto is “Success comes in cans—I can, you can, we can,” and we are going to live up to it.

Success comes in “Cans.” I can, you can attend Mankato Commercial College, Mankato Minn. Send for free catalog.

Also, in 1922 the high school in Vestaburg, Michigan selected a motto that was similar to the one selected in Oklahoma. However, the phrase “we can” was replaced by “he can”:[9] 1922 June 8, The Alma Record, Vestaburg, Quote Page 12, Column 3, Alma, Michigan. (Newspapers_com)

In 1961 Evan Esar published “Humorous English” which included a section discussing auxiliary verbs such as: can, will, and should:[10] 1961, Humorous English by Evan Esar, Chapter 4: Parts of Speech, Quote Page 50, Horizon Press, New York. (Verified with scans)

In humorous English they are chiefly used to build epigrams.

Success comes in cans, failures in can’ts.
One can never tell about a girl’s morals–and one shouldn’t.
Every lazybones deserves a kick in the seat of his can’ts.

In 1994 a newspaper in Waterloo, Iowa printed an advertisement containing a variant saying:[11] 1994 September 11, The Waterloo Courier, (Advertisement for Manpower about Safety Week), Quote Page A10, Column 5, Waterloo, Iowa. (Newspapers_com)

MANPOWER encourages all workers to work safely.
SAFETY COMES IN CANS … I CAN! YOU CAN! WE CAN!

Image Notes: Illustration of a plant pot constructed from tin cans. This is a public domain image from “The Book of Knowledge” (1912).

(Great thanks to Edward David Luft whose inquiry led QI to formulate this question and perform this exploration. Thanks also to previous researchers Charles Clay Doyle, Wolfgang Mieder, and Fred R. Shapiro of “The Dictionary of Modern Proverbs” ; and Barry Popik of “The Big Apple” website.)