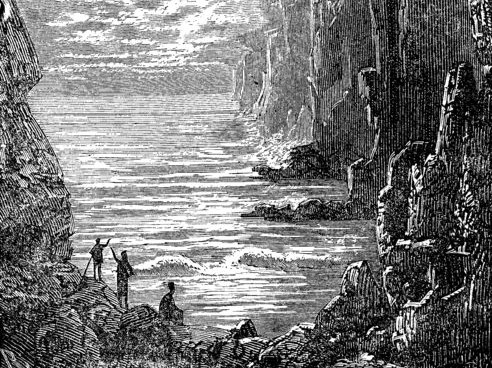 Dear Quote Investigator: It is natural to assign meaning or purpose to the terminus of a long journey, but the value truly lies within the journey itself. This notion has been expressed as follows:

It is good to have an end to journey toward; but it is the journey that matters, in the end.

The famous author Ernest Hemingway and the award-winning speculative fiction writer Ursula K. Le Guin have both received credit for this statement. Would you please determine the correct authorship?

Quote Investigator: There is no substantive evidence that Ernest Hemingway said or wrote this. He died in 1961, and was given credit by 2010, a very late date.

In 1969 Ursula K. Le Guin published “The Left Hand of Darkness” which explored gender roles and relationships on an alien planet. The popular work won the Hugo and Nebula awards. During a long trek in a frigid region two characters encountered a remarkable scene of pinnacles, cliffs, smoke, fire, and rubble near a massive glacier: 1

Across those valleys a great wall stood, a wall of ice, and raising our eyes up and still up to the rim of the wall we saw the Ice itself, the Gobrin Glacier, blinding and horizonless to the utmost north, a white, a white the eyes could not look on.

The travelers placed a high value on their experiences during the journey. Boldface added to excerpts by QI: 2

Estraven stood there in harness beside me looking at that magnificent and unspeakable desolation. “I’m glad I have lived to see this,” he said.

I felt as he did. It is good to have an end to journey towards; but it is the journey that matters, in the end.

There is a QI article available that explores an older thematically related expression: “Life is a journey and not a destination” available here.

The earliest close match for this saying located by QI appeared in 1920 in “The Christian Advocate”. The phrase was used by theologian Lynn H. Hough within his outline for a Sunday School Lesson: 3

In 1969 the quotation under examination appeared in a novel by Le Guin, and in 1977 “The Quotable Woman: 1800-1975” edited by Elaine Partnow included an entry with the following information: 4

Ursula K. Le Guin
It is good to have an end to journey towards; but it is the journey that matters, in the end.
The Left Hand of Darkness, Ch. 15, 1969

In 1985 Le Guin received credit in “A Teacher’s Treasury of Quotations” compiled by Bernard E. Farber. The accompanying citation pointed to “The Left Hand of Darkness”. 5

In 1990 “Sunbeams: A Book of Quotations” included a slightly modified version of the quotation. The word “towards” was changed to “toward”, and Le Guin received credit. 6

In 2010 an obituary in the “La Crosse Tribune” of Wisconsin ended with the quotation and an attribution to Ernest Hemingway: 7

“It is good to have an end to journey toward; but it is the journey that matters, in the end.”—Ernest Hemingway

In conclusion, Ursula K. Le Guin should receive credit for this quotation. The original statement used “towards” and not “toward”. The linkage to Hemingway is unsupported.

Image Notes: Public domain illustration circa 1864 by Edouard Riou for the work “Journey to the Center of the Earth”. Image has resized and cropped.