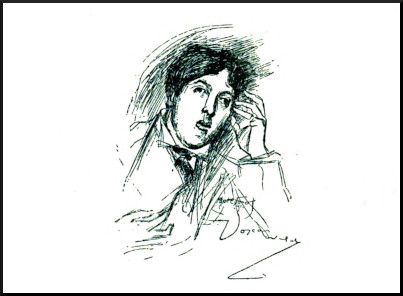 Dear Quote Investigator: According to legend, the famous wit Oscar Wilde delivered a comically audacious line when he first entered the United States during his lecture tour. A customs official in New York asked him if he had anything to declare, and he supposedly replied:

I have nothing to declare but my genius.

Quote Investigator: Oscar Wilde entered New York in January 1882. Yet, the earliest evidence of the quip known to QI appeared in 1910. The phrasing has varied over time. Often it has been presented from a third person perspective. Here is a summary with dates:

The remark appeared within “The Oscar Wilde Calendar” of 1910 compiled by Stuart Mason, a pseudonym for Christopher Sclater Millard. For each day of the year a quotation ascribed to Wilde was presented, and the following appeared for January 4th. Boldface added to excerpts by QI:[1]1910, The Oscar Wilde Calendar: A Quotation from the Works of Oscar Wilde for Every Day in the Year with Some Unrecorded Sayings Selected by Stuart Mason (Christopher Sclater Millard), Quotation for … Continue reading

Millard mentioned Robert Ross in the acknowledgement section of the calendar. Ross was a close friend and literary executor of Wilde. He may have supplied the quotation to Millard:[2]1910, The Oscar Wilde Calendar: A Quotation from the Works of Oscar Wilde for Every Day in the Year with Some Unrecorded Sayings Selected by Stuart Mason, Section: Acknowledgement, Quote Page 91, … Continue reading

Many quotations are made from works little known to the general reader. Some are taken from unpublished manuscripts, others are traditional. For many of the latter the compiler is indebted to the courtesy of Mr Robert Ross.

But I’m back now at last, and my troubles are past,
Though my baggage was cruelly undone;
It was very unfair, for I’d nought “to declare”
But my pleasure at landing in London!

“I have cut my hair and I have written a play, and still I fail to please. But genius cannot be crushed. I shall go in training for a slugging match and open a bar.”—Oscar Wilde.

In 1890 Wilde published “The True Function and Value of Criticism” in the London literary journal “The Nineteenth Century”. Wilde employed a dialogue format with participants Gilbert and Ernest. Wilde suggested that the public treated geniuses harshly:[5]1890 July, The Nineteenth Century: A Monthly Review, Volume 28, Number 161, The True Function and Value of Criticism; With Some Remarks on the Importance of Doing Nothing, (A dialogue between Gilbert … Continue reading

Ernest. … the English public always feels perfectly at its ease when a mediocrity is talking to it.
Gilbert. Yes: the public is wonderfully tolerant. It forgives everything except genius.

In 1910 the quotation appeared in “The Oscar Wilde Calendar” compiled by Christopher Sclater Millard as mentioned previously:

That is how it came about that on December 24, 1881, Wilde sailed for New York, to say that he was disappointed in the Atlantic, to tell the Customs Officials that he had nothing to declare except his genius, and to lecture throughout America on “The English Renaissance of Art,” “House Decoration,” and “Art and the Handicraftsman.”

When he arrived at New York on his lecturing visit to the United States, Wilde on being asked at the Custom House if he had anything to declare answered: “I have nothing to declare, except my genius.”

In May 1912 “The Sun” newspaper of New York discussed Ransome’s book and repeated the quip in the third person with a slightly altered form; the word “but” replaced “except”:[8] 1912 May 5, The Sun, Oscar Wilde, Section 2, Quote Page 4, Column 3, New York, New York. (Newspapers_com)

On his arrival in New York he announced his disappointment with the Atlantic ocean which moved the St. James Gazette to observe that “a great calamity had befallen a considerable body of water.”

Having delivered himself of this sentiment and informed the custom house officers that he had nothing to declare but his genius, he disappeared from the ken of the reporters for twenty four hours or so.

In America he was greeted with amused incredulity, treated as a diverting sort of literary curiosity, ridiculed, satirized, caricatured. His intellectual arrogance gave tone to his remark at the New York Customs House: “I have nothing to declare but my genius.”

On landing he boldly challenged Fortune again by telling the custom officials that he had nothing to declare but his genius.

In 1916 Frank Harris published a biography “Oscar Wilde: His Life and Confessions”. He switched the quip from third person to first person, and he changed “but” to “except”. Harris also suggested that the remark produced contemporaneous discussion, but it was absent from newspapers of the period:[11] 1916, Oscar Wilde: His Life and Confessions by Frank Harris, Volume 1 of 2, Chapter 5, Quote Page 74 and 75, Printed and Published by The Author, New York City. (Google Books Full View) link

His phrase to the Revenue officers on landing: “I have nothing to declare except my genius,” turned the limelight full upon him and excited comment and discussion all over the country.

He opened his tour by stating to the customs-officer that he had nothing to declare save his genius.

It was at Delmonico’s, shortly after he told our local Customs that he had nothing to declare but genius, that I first met him. He was dressed like a mountebank.

Which is as neat as Oscar Wilde’s answer to the Customs House officer in New York, who asked importantly, “What have you to declare, Mr. Wilde?” “Nothing—except—my genius,” he answered.

When Oscar Wilde came to the United States to lecture, in 1881, the customs officer asked him if he had anything taxable. “Only my genius” was his answer.

“When I arrived in New York I was fairly smothered by reporters. It appears that some of the imaginative ones who are ever at work to make me famous had spread the story that I slept in gorgeous lace nightgowns. I detected, therefore, unusual curiosity in the faces of customs officers when they bade me open my trunks for examination. Finding nothing one of them asked: ‘Have you anything to declare?’ ‘Nothing,’ was my disillusioning reply. ‘Nothing, except my genius.’ Naturally the papers all made capital out of that declaration.”

One further pamphlet must be mentioned: Oscar Wilde’s Letters to Sarah Bernhardt (1924), edited by Sylvestre Dorian and published by the Haldeman-Julius Company of Girard, Kansas, as Little Blue Book No. 64. Embedded in its sixty-four pages of rambling gossip and quotation are what purport to be eight letters from Wilde to Sarah Bernhardt, translated from their original French.

Prolonged study has convinced me that, though some of them may have been partially based on genuine originals, they are too spurious for inclusion here. One of them, for instance, includes a long verbatim passage from one of Wilde’s much later essays.

When in the custom house in New York he was asked what he had to declare, and replied “Nothing but my genius.”

No one has ever equalled Oscar Wilde’s opener. When customs officials approached him, he remarked: “I have nothing but my genius to declare.”

In 2022 researcher John Cooper published a piece titled “Something To Declare” on his website “Oscar Wilde in America”. Cooper discussed his discovery of the earliest evidence of the quip within the 1910 book “The Oscar Wilde Calendar”. QI learned about this citation from Cooper’s article. Cooper suggested that Robert Ross may have provided the quotation to Christopher Sclater Millard and Arthur Ransome.[20]Website: Oscar Wilde in America, Article title: Something To Declare, Article author: John Cooper, Date on website: January 16, 2022, Website description: Blog about Oscar Wilde by researcher John … Continue reading

In conclusion, the evidence that Oscar Wilde delivered this line to a customs official in 1882 is quite weak. The earliest citation in 1910 appeared almost two decades after the supposed incident and one decade after Wilde’s death. Yet, it seems that Robert Ross linked the quip to Wilde and relayed it to Christopher Sclater Millard. Perhaps Wilde mentioned it to his friend Ross as a witticism he hoped to employ someday.

Image Notes: Illustration from the beginning of “The Oscar Wilde Calendar” (1910) described as a pencil drawing of Osar Wilde by Albert C. Sterner. Image has been resized.

(Great thanks to Fred R. Shapiro whose inquiry back in 2011 led QI to initiate research on this topic. Many thanks to John Cooper who recently identified the 1910 citation. This lead QI to formulate this question and complete this article. Also, thanks to Bonnie Taylor-Blake for accessing the 1910 citation. In addition, thanks to mailing list discussants Jonathan Lighter and Mark Mandel.)