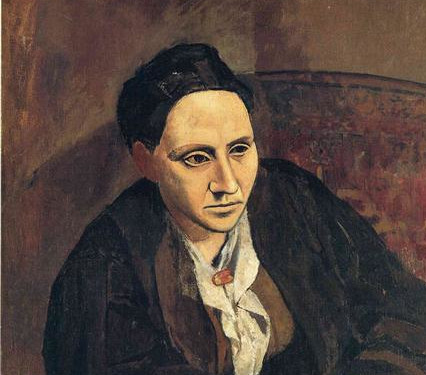 Dear Quote Investigator: Depictions of people in paintings, photographs, books, and movies can dramatically change cultural perceptions. Powerful images cause accuracy to be superseded, and stylized portrayals to become reified.

Near the beginning of the twentieth century the famous Spanish artist Pablo Picasso painted a portrait of the prominent writer and art collector Gertrude Stein. Several viewers of the artwork complained that the image was inaccurate. Picasso confidently and astutely replied with a remark similar to this:

It may not look like Gertrude Stein now, but it will.

Is this anecdote correct? Would you please help me to find a citation?

Quote Investigator: In 1933 Gertrude Stein published “The Autobiography of Alice B. Toklas”. Stein wrote the book using the viewpoint and voice of her friend and life partner Toklas. Boldface added to excerpts by QI:[1] 1933, The Autobiography of Alice B. Toklas by Gertrude Stein, Chapter 2: My Arrival in Paris, Quote Page 14, Harcourt, Brace and Company, New York. (Verified with scans)

After a little while I murmured to Picasso that I liked his portrait of Gertrude Stein. Yes, he said, everybody says that she does not look like it but that does not make any difference, she will, he said.

Creating the portrait was a slow process for Picasso; he painted it during several months in 1905 and 1906. Toklas arrived in Paris in 1907, and Picasso spoke the line while visiting with Toklas and others in Stein’s art-filled home in Paris.

Gessler believed that the book was really centered on Stein:

The “autobiography” of Alice B. Toklas is, of course, in reality the autobiography of Gertrude Stein, though Miss Toklas appears almost equally in it and is quoted in it frequently.

Gessler found Picasso’s remark memorable, and he shared it with readers:

And there was Picasso’s portrait of Miss Stein. “Everybody says that she does not look like it, but that does not make any difference, she will, he said.”

In 1938 Gertrude Stein published the book “Picasso” about her close friend. She described the lengthy gestation of the famous portrait, and she expressed her satisfaction with the likeness:[3]1959, Picasso by Gertrude Stein, Quote Page 8, (First published in French by Librairie Floury in 1938; published in English by Batsford in 1938), Beacon Press, Boston, Massachusetts. (Verified with … Continue reading

I posed for him all that winter, eighty times and in the end he painted out the head, he told me that he could not look at me any more and then he left once more for Spain. It was the first time since the blue period and immediately upon his return from Spain he painted in the head without having seen me again and he gave me the picture and I was and I still am satisfied with my portrait, for me, it is I, and it is the only reproduction of me which is always I, for me.

“My aim,” says Dali of these likenesses of wealthy heiresses and glamor women of the international set, “was to establish a rapport of fatality between each of the different personalities and their backgrounds. I do not paint a portrait to look like the subject. Rather does the person grow to look like his portrait.”

While you and Picasso pat each other on the back, I wish to state in a non-genius way that I think his paintings look like the work of a crackpot! Thank goodness things don’t look like that to me. . . .

Here, in his latter-day apotheosis, the artist is Picasso, iconoclast and protean father of modern art, who once said of his famous portrait of Gertrude Stein, “Now she does not look like it. But never mind, she will.”

It’s like when Gertrude Stein said to Picasso, “That portrait doesn’t look like me.” Picasso said, “It will.” It’s an illusion.

When Alice B. Toklas arrived from San Francisco and became a regular at the rue de Fleurus, she told Picasso at dinner one night how much she liked the portrait. “Everybody says that she does not look like it,” he replied, “but that does not make any difference, she will.” And she did—a portrait of Dorian Gray in reverse.

In 1996 “The New York Times” printed remarks about Picasso from the painter and conceptual artist Glenn Ligon who presented a concise instance of the tale:[9]1996 April 28, New York Times, Picasso: Love Him? Hate Him? A Bit of Both? by Robert Atkins, (Remark from Glenn Ligon – Painter and conceptual artist), Start Page H42, Quote Page H46, New York. … Continue reading

He represents the artist who was certain that a world could be created through his images. There’s that famous anecdote about his telling Gertrude Stein that she would grow to look like his portrait of her. It’s a pretty romantic view of art that allows no room for doubt, but today we live in an age of uncertainty.

In 2022 Michael Schulman, a staff writer of “The New Yorker”, wrote a piece about a coach who felt that he had been cruelly and inaccurately portrayed in a television docudrama. The coach threatened to sue the producers of the show. Schulman mentioned the Picasso anecdote as an entertaining archetype of divergent depictions:[10]Website: The New Yorker, Section title: Cultural Comment, Article title: Could Jerry West Topple the Docudrama?, Article author: Michael Schulman, Date on website: May 24, 2022, Website description: … Continue reading

In an oft-told tale, when Gertrude Stein saw Pablo Picasso’s portrait of her and said that it looked nothing like her, the painter replied, “She will.” (Did this even happen? The story negates its own need for veracity.)

In conclusion, Gertrude Stein presented the tale in her 1933 book “The Autobiography of Alice B. Toklas”. The quotation was probably spoken by Pablo Picasso to Toklas a short time after she had arrived in Paris in 1907. Toklas likely told Stein about the exchange, or Stein overheard it when it occurred. There was a lengthy delay between the event and the publication of the quotation in 1933. QI conjectures that the other renderings of the anecdote were derived from Stein’s words directly or indirectly.

(Thanks to Michael Schulman for writing an intriguing article. The exchange ascribed to Stein and Picasso inspired QI to formulate this inquiry, perform this exploration, and compose this article.)