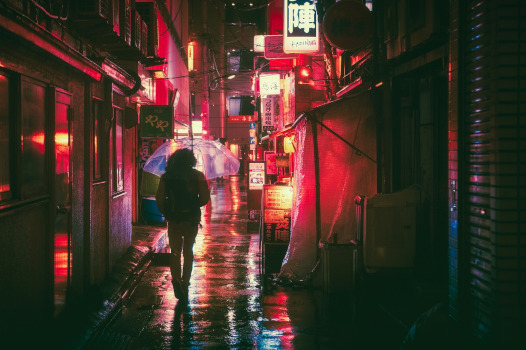 Question for Quote Investigator: There is a family of sayings with a surrealistic twist. Here are three instances:

(1) If you walk far enough you’ll meet yourself.

(2) Walk far enough and you will meet yourself, coming the other way.

(3) If you travel far enough, one day you will recognize yourself coming down the road to meet yourself.

This notion has been attributed to English fantasy author Terry Pratchett who created the Discworld, Canadian Jungian psychoanalyst Marion Woodman who was a mythopoetic author, U.S. literature professor Joseph Campbell who wrote “The Hero with a Thousand Faces”, and English novelist David Mitchell who wrote “Cloud Atlas”. Would you please explore this topic?

Reply from Quote Investigator: The earliest close match located by QI appeared in “The Boston Post” newspaper of Massachusetts in 1895. The statement was employed by Vina Howland of Oakland, Massachusetts who presented an anonymous attribution. She was figuratively referring to the complicated layout of streets and walkways in Boston. Boldface added to excepts by QI:[1] 1895 July 11, The Boston Post, Among the Women: Other Expressions, Quote Page 3, Column 2, Boston, Massachusetts. (Newspapers_com)

Miss Vina Howland of Oakland is a very pretty girl. She said: “How disappointed we were not to have this convention, but just think! I’ve seen Boston and convention, too; it’s like a dream. But ain’t it an awful place to get lost? I believe now the story they tell that is, ‘If you walk far enough you’ll meet yourself.’”

Based on current evidence the originator of the saying remains anonymous. The meaning of this notion is highly variable as shown below. QI has not yet found any substantive support for the ascription to Joseph Campbell.

In 1894 a columnist of the “Western Mail” in Cardiff, Wales contemplated returning to a place of previous happiness, but she was warned against it because she might encounter her “past self”. The following passage references bittersweet nostalgia and not time travel:[2] 1894 August 4, Western Mail, Section: The Ladies’ Own, Woman’s World, Quote Page 2, Column 1, Cardiff, South Glamorgan, Wales. (Newspapers_com)

A wise, far-seeing friend to whom I spoke of the experience just alluded to, and said I thought of going this autumn to another place, where I had once been very happy—this time, however, without any thought of being able to renew past delight—said to me, “Do not go there; you will meet yourself, your past self, and it will not be good for you”; and I altered my plans accordingly. No! when one comes to think of it one does not particularly care to meet oneself; it could not be a very satisfactory—it might be a very painful—encounter.

In 1895 the expression under examination appeared in the “The Boston Post” as mentioned previously:

“I believe now the story they tell that is, ‘If you walk far enough you’ll meet yourself.’”

In 1906 a columnist in “The Evening Times” of Grand Forks, North Dakota discussed purchasing hats. The columnist stated that the owner of a new and fashionable hat would repeatedly encounter other owners of the same hat. Figuratively, one would “meet oneself”.[3] 1906 March 20, The Evening Times, Society by Mrs. A.F. Page (Society Editor), Quote Page 3, Column 1, Grand Forks, North Dakota. (Newspapers_com)

When Buying a Hat
Avoid what the milliners call the “very latest.” The very latest is usually the very earliest, and you will meet yourself coming around the corner about seven times a day.

Watching the other man’s patch will not keep the weeds out of your own.

“Keep a going; but don’t make the life road so crooked that you will meet yourself coming back.”

One day of fret and worry may blight a whole week.

In 1914 “The Argos Reflector” of Indiana printed a version of the expression figuratively referring to crooked streets in Honolulu, Hawaii:[5] 1914 August 13, The Argos Reflector, The Paradise of the Pacific, Start Page 1, Quote Page 4, Column 6, Argos, Indiana. (Newspapers_com)

Honolulu is worse than Boston. Narrow, crooked streets, and you don’t know whether you are going or coming from school. Wander around for a half hour and you will meet yourself. And while you are burning up under the tropical sun, you can look a mile up in the mountains and see all kinds of a squall raging, or pouring down from the fog clouds that almost hide the hills.

Pete Lauer says you may talk about roads but his Uncle Sammy has some which run in a circular track and no matter which way you go for a walk you will meet yourself on the way back.

CITY PLANNING: “If you walk far enough in Boston you will meet yourself coming back.” There was, originally, little city planning in Boston. Thousands of American cities are struggling with their inadequate or ill-planned transportation facilities, due, in many cases, to a total lack of system in the laying out of streets.”

In 1924 an instance appeared in the dialog of the play “When Jane Takes a Hand”. The phrase reflected pugilistic exaggeration:[8] 1924 Copyright, When Jane Takes a Hand: A Play in Four Acts by Katharine Kavanaugh, Act 1, Quote Page 4, The Dramatic Publishing Company, Chicago, Illinois. (Google Books Full View) link

JOSEPHINE. [Interrupting.] If you say that again, I’m gwine to knock you so far away from dat window dat you’ll meet yourself comin’ back. Come in yer, I tell you. You hear me talkin’?

In 1952 the expression appeared in a column about kitchens published in “The Salt Lake Tribune” of Utah. The author used the phrase to indicate that the latest kitchens echoed the style of old fashioned kitchens:[9] 1951 January 30, The Salt Lake Tribune, Newest Kitchen: Could Be Heaven,—Maybe? by G.G., Quote Page 8, Column 6, Salt Lake City, Utah. (Newspapers_com)

If you travel far enough you will meet yourself coming back. We buy greeting cards with pictures of the good old style kitchen which was the family living room as well, where all things centered …

And all the time here was grandma’s nostalgic old kitchen taking form again right under our nose. It was shown in Chicago at a recent furniture display …

But if you travel far enough, one day you will recognize yourself coming down the road to meet yourself. And you will say—YES.

But if you travel far enough, one day you will recognize yourself coming down the road to meet yourself. And you will say YES.
Marion Woodman, Canadian Jungian analyst,
Addiction to Perfection, 1982

The caves are rumoured to run everywhere in the kingdom; it is widely believed that there is a secret entrance in the castle. But they are also one of those features that are not bound by the laws of time and space. Travel far enough in the caves and you will find mythical kings, asleep with their warriors; you will hear the roar of the Minotaur and the sheep of the Cyclops. Walk far enough and you will meet yourself, coming the other way …

In 2004 David Mitchell published the prize-winning novel “Cloud Atlas” which explored the theme of reincarnation. The expression under analysis was used as a secret passphrase:[14] 2004 Copyright, Cloud Atlas by David Mitchell, Section: An Orison of Sonmi~451, Quote Page 336, Sceptre: Hodder and Stoughton, London. (Verified with scans)

A pause ensued. The tiger-lily blushed and inquired if we had traveled far. I recognized a series of passwords.
Hae-Joo completed the code. ‘Travel far enough, you meet yourself.’

In 2016 the quotation appeared on the website Goodreads[15]Website: Goodreads, Article title: Joseph Campbell > Quotes > Quotable Quote, Timestamp of earliest comment: Jan 03, 2016 01:18PM, Website description: Goodreads is a large community for … Continue reading together with a citation pointing to Joseph Campbell’s book “Myths to Live By”; however, QI has searched this work, and the quotation is absent.[16] 1972, Myths To Live By by Joseph Campbell, (Quotation is absent), The Viking Press, New York. (Verified with scans)

“If you travel far enough, you’ll eventually meet yourself.”
― Joseph Campbell, Myths to Live By

In conclusion, this saying was circulating by 1895, and the originator remains anonymous. The underlying meaning is mutable with references to: winding pathways, returning fashions, wistful feelings, powerful punches, spiritual self-discovery, and magical time-travel. Marion Woodman, Terry Pratchett, and David Mitchell employed versions of the expression after it was already in use. The linkage to Joseph Campbell is currently unsupported.

Image Notes: Night picture of a person beneath an umbrella walking down a street in Osaka, Japan from Masashi Wakui at Pixabay. Image has been resized.

(Great thanks to June whose inquiry led QI to formulate this question and perform this exploration. June accessed “Myths To Live By” by Joseph Campbell and also determined that the quotation was absent.)