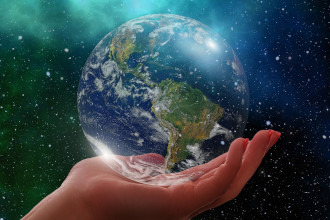 Dear Quote Investigator: When I watch the news I see endless reports signaling that the world is a mess. Efforts to mend the world are necessary and laudable; however, I am reminded of the advice given by mythology scholar Joseph Campbell. The world has always been a mess, and priority should be given to straightening out our own lives. Would you please help me to find a citation?

We cannot cure the world of sorrows, but we can choose to live in joy.
When we talk about settling the world’s problems, we’re barking up the wrong tree.
The world is perfect. It’s a mess. It has always been a mess.
We are not going to change it.
Our job is to straighten out our own lives.

Below is one additional selected citation.

END_OF_DOCUMENT_TOKEN_TO_BE_REPLACED

Dear Quote Investigator: Life often presents us with unexpected obstacles and challenges that require us to rethink our assumptions. The following pertinent statement has been attributed to the expert in mythology Joseph Campbell and popular English novelist E. M. Forster:

We must let go of the life we have planned, so as to accept the one that is waiting for us.

I have not been able to find a solid citation for either. Would you please help?

We must be willing to get rid of
the life we’ve planned, so as to have
the life that is waiting for us.

The old skin has to be shed
before the new one can come.

The text provided a close match to the sentence under examination although the precise phrasing differed. The final sentence employed a metaphor based on the shedding of skin, e.g., snakeskin.

QI has been unable to find substantive evidence supporting the ascription to E. M. Forster who died in 1970. He received credit for a version of the saying in 2002.

END_OF_DOCUMENT_TOKEN_TO_BE_REPLACED

Dear Quote Investigator: Joseph Campbell was renowned for teaching about the mythologies of many cultures. The following statement is often ascribed to him:

The cave you fear to enter holds the treasure you seek.

I have looked through several of his books and have not located this quote. Did he say or write this?

It is by going down into the abyss
that we recover the treasures of life.

Where you stumble,
there lies your treasure.

The very cave you are afraid to enter
turns out to be the source of
what you are looking for.
The damned thing in the cave
that was so dreaded
has become the center.

You find the jewel,
and it draws you off.

In loving the spiritual,
you cannot despise the earthly.

The layout of the phrases above mirrors the formatting in the book. There are two natural hypotheses: The pithy quotation may have evolved from statements above via a process of streamlining and compression. Alternatively, Campbell may have returned to this theme several times over the years, and on one occasion he may have spoken the concise expression.

This article ends with two citations and a concluding comment.

END_OF_DOCUMENT_TOKEN_TO_BE_REPLACED

Dear Quote Investigator: Here is a quick question. Which of the following quotations is accurate?

There is not one shred of evidence that life is serious. —Joseph Campbell

Not a shred of evidence exists in favor of the idea that life is serious. —Brendan Gill

Not one shred of evidence supports the notion that life is serious. —Anonymous

If each of these four quotes is inaccurate can you determine the original quotation and coiner? My friend has some magnets that credit the poet and humorist Ogden Nash.

In fact, not a shred of evidence exists in favor of the argument that life is serious, though it is often hard and even terrible. And saying that, I am prompted to add what follows out of it: that since everything ends badly for us, in the inescapable catastrophe of death, it seems obvious that the first rule of life is to have a good time; and that the second rule of life is to hurt as few people as possible in the course of doing so. There is no third rule.

Gill’s actual statement is very similar to the one given by the questioner but not identical. The word “argument” is used instead of “idea”. This altered version has become more popular over time. In 1979 the compilation “1,001 Logical Laws” gathered by John Peers included the following instance with the word “idea”:[2]1979, 1,001 Logical Laws, Accurate Axioms, Profound Principles, Compiled by John Peers, Edited by Gordon Bennett, Quote Page 120, Doubleday & Company, Inc., Garden City, New York. (Verified on … Continue reading

Gill’s Law:
Not a shred of evidence exists in favor of the idea that life is serious.