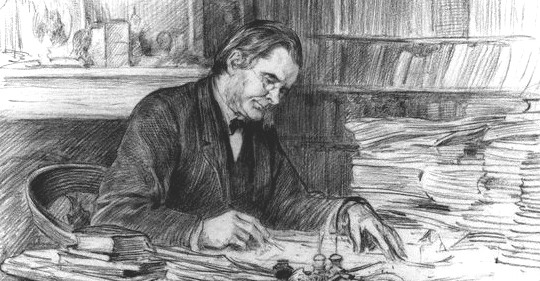 END_OF_DOCUMENT_TOKEN_TO_BE_REPLACED

Dear Quote Investigator: Recently I saw a tweet with a quotation attributed to the famous playwright and intellectual George Bernard Shaw:

Beware of false knowledge; it is more dangerous than ignorance.

I haven’t been able to find a solid citation. Would you please help?

He who can, does. He who cannot, teaches.

A learned man is an idler who kills time with study. Beware of his false knowledge: it is more dangerous than ignorance.

Activity is the only road to knowledge.

Every fool believes what his teachers tell him, and calls his credulity science or morality as confidently as his father called it divine revelation.

Shaw’s comment about false knowledge has close precursors, and QI suggests a possible lineage for the remark by presenting selected citations in chronological order below.

END_OF_DOCUMENT_TOKEN_TO_BE_REPLACED

1) Begins as heresy
2) Turns into orthodoxy,
3) Ends up as superstition.

I cannot remember who said this. Can you help?

Quote Investigator: There are several different quotations that describe the reception of new ideas via a series of stages. A partial match with two stages instead of three was spoken by the scientist Thomas Henry Huxley during a lecture delivered at The Royal Institution of Great Britain. Today Huxley is best known as “Darwin’s bulldog” because of his vigorous defense of the theory of evolution. Huxley’s speech was printed in the journal “Nature” in 1880. Emphasis added to excerpts by QI:[1]1880 May 6, Nature: A Weekly Illustrated Journal of Science, Volume 22, The Coming of Age of the Origin of Species by T. H. Huxley, (Footnote: A lecture delivered at the Royal Institution, Friday … Continue reading

History warns us, however, that it is the customary fate of new truths to begin as heresies and to end as superstitions; and, as matters now stand, it is hardly rash to anticipate that, in another twenty years, the new generation, educated under the influences of the present day, will be in danger of accepting the main doctrines of the Origin of Species with as little reflection, and it may be with as little justification, as so many of our contemporaries, twenty years ago, rejected them.

In 1961 Huxley received credit for a version with heresy, orthodoxy, and superstition, but QI has not yet found substantive evidence that he actually employed a tripartite expression.