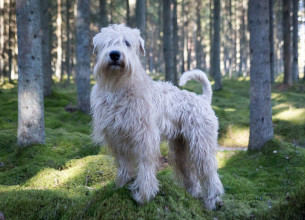 Dear Quote Investigator: A shaggy dog story is a rambling tale consisting of largely inconsequential events that ends with an anticlimax or an unfunny punchline. Would you please explore the origin of the shaggy dog story?

Quote Investigator: The earliest evidence located by QI appeared in “The Cincinnati Post” of Ohio in January 1906. QI conjectures that P. J. Faulkner who worked for the O’Dell Stock and Grain Company in Cincinnati presented the first shaggy dog story. Faulkner believed that his tale was hilarious, but his companions were angered by its pointlessness. Boldface added to excerpts by QI:[1] 1906 January 03, The Cincinnati Post, Advertises for a Dog and Gets One All Right, Quote Page 4, Column 4 and 5, Cincinnati, Ohio. (GenealogyBank)

Faulkner was in a down-town cafe with some friends. He told them a story. “Did you ever hear the story of the shaggy dog?” he inquired.
“No!” they came back.
“No?” said he.
“No-o,” said they.

“So he went to his friend Mike, who, he had heard, had one.

“But Mike’s dog. though shaggy some, was not so shaggy!” (Ha-ha-ha-he-he-ho-ho by Faulkner. Silence by friends.)

“Ain’t it funny?” he asked.
“We don’t see it,” said the friends innocently.
“Well, listen,” Faulkner went on.

Faulkner’s unhappy friends decided to creatively retaliate against him by placing an advertisement in a local paper. Details within the ad were carefully chosen to reflect the insipid story they found so aggravating:

WANTED
Dog—shaggy dog; must be either black or brown, but not too shaggy; will pay good price. P. J. Faulkner, 3229 Fredonia-av., Avondale.

The ad was remarkably successful in eliciting responses, and Faulkner’s home was overwhelmed with miscellaneous dogs:

In addition, many dogs were offered to Faulkner by phone, and the exhausted man eventually decided to flee his home.

This article appeared in other newspapers such as “The Denver Post” of Colorado[2] 1906 January 08, The Denver Post, Victim of Dog Trick, Quote Page 4, Column 3, Denver, Colorado. (GenealogyBank) which acknowledged the Cincinnati paper.

The article presented two shaggy dog tales with one nested inside the other. Faulkner told the first humorless tale, and a journalist told the second tale of comeuppance. The combination of the dual narratives was memorable, but over time the text evolved into a single story as shown below

END_OF_DOCUMENT_TOKEN_TO_BE_REPLACED

Dear Quote Investigator: A provocative remark about stories has been attributed to Fyodor Dostoyevsky, Leo Tolstoy, John Gardner, and others:

There are only two plots in all of literature:
1) A person goes on a journey.
2) A stranger comes to town.

Are you willing to follow plot number one and embark on a journey to discover the origin of this adage?

Write the opening of a novel using the authorial-omniscient voice, making the authorial omniscience clear by going into the thoughts of one or more characters after establishing the voice. As subject, use either a trip or the arrival of a stranger (some disruption of order—the usual novel beginning).

The exercise above did not assert that the two possibilities referenced exhausted all plot choices. Also, the statement was only about the beginning of a novel. Nevertheless, these words were the earliest pertinent published evidence known to QI.

John Gardner once observed that there are only two plots: A stranger rides into town, and A man goes on a journey. I think he’s right: there’s no such thing as a new plot, and I don’t expect to find one in the stack of manuscripts. But I do crave an original telling—one of our shared stories done again, ablaze with new detail.

The phrasing used to express the assertion has varied considerably suggesting that later propagators were not referencing a fixed textual source.

A citation in 1998 claimed that Gardner made a remark similar to the one under investigation circa 1978 during a “Bread Loaf Writers’ Conference”. Yet, memories of events twenty years in the past are often malleable. Details are presented further below.