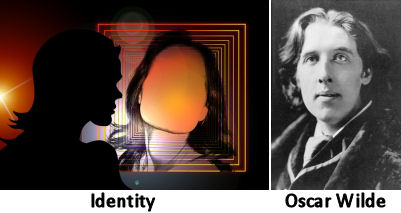 In 1882 Oscar Wilde wrote an introduction to a collection of verse and while discussing principles of aesthetics he broached the topic of “one’s real life”. Boldface has been added:[5]1882, Rose Leaf and Apple Leaf, Verses by James Rennell Rodd (1st Baron Rennell), With an Introduction by Oscar Wilde, L’Envoi (Introduction), Start Page 11, Quote Page 23 and 24, J. M. … Continue reading

In some such way as this we could gather up these strewn and scattered petals of song into one perfect rose of life, and yet, perhaps, in so doing, we might be missing the true quality of the poems; one’s real life is so often the life that one does not lead; and beautiful poems, like threads of beautiful silks, may be woven into many patterns and to suit many designs, all wonderful and all different…

In July 1890 Oscar Wilde published “The Picture of Dorian Gray” in “Lippincott’s Monthly Magazine”. The central thesis of the novel was the disjunction between the outward appearance of an individual and his or her internal thoughts and feelings. During one scene the character Basil Hallward criticized his friend Lord Henry who responded with humor:[6] 1890 July, Lippincott’s Monthly Magazine, The Picture of Dorian Gray, Start Page 3, Quote Page 5, Published by J. B. Lippincott Company, Philadelphia, Pennsylvania. (Google Books Full View) link

“You never say a moral thing, and you never do a wrong thing. Your cynicism is simply a pose.”
“Being natural is simply a pose, and the most irritating pose I know,” cried Lord Henry, laughing.

The phrase “be yourself” in the quotation under investigation is comparable to “being natural”, and here Wilde playfully reversed the conventional notion.

In September 1890 an essay by Wilde titled “The True Function and Value of Criticism” was published in the London periodical “The Nineteenth Century”. Wilde suggested there was a complex relationship between masks and candor:[7]1890 September, The Nineteenth Century (A Monthly Review), Volume 28, The True Function and Value of Criticism; With Some Remarks On the Importance of Doing Nothing: A Dialogue (Concluded) by Oscar … Continue reading

Man is least himself when he talks in his own person. Give him a mask, and he will tell you the truth.

Perhaps one never seems so much at one’s ease as when one has to play a part. Certainly no one looking at Dorian Gray that night could have believed that he had passed through a tragedy as horrible as any tragedy of our age.

Oscar Wilde’s play “An Ideal Husband” was first performed in 1895. In one scene the character Sir Robert Chiltern asked Mrs. Cheveley whether she was an optimist or pessimist. She replied that she was neither and that both stances were merely poses. Chiltern continued with another question:[9]1905, The Plays of Oscar Wilde, Volume 2, An Ideal Husband, (Performance Note: Theatre Royal, Haymarket, London, January 3, 1895), (Pages numbers are reinitialized at 1 for each play), Start Page 1, … Continue reading

Sir Robert Chiltern: You prefer to be natural?
Mrs Cheveley: Sometimes. But it is such a very difficult pose to keep up.

Wilde revisited the theme of authentic identity in the epistolary work “De Profundis” which he composed while in prison and which was published in 1905 after his death in 1900:[10] 1905, De Profundis by Oscar Wilde, Quote Page 63, G. P. Putnam’s Sons, New York and London. (HathiTrust Full View) link link

It is tragic how few people ever “possess their souls” before they die. “Nothing is more rare in any man,” says Emerson, “than an act of his own.” It is quite true. Most people are other people. Their thoughts are some one else’s opinions, their lives a mimicry, their passions a quotation.

In 1967 a thematic match from Thomas Merton was published, and in 1999 an exact match appeared as noted previously.

An instance of the saying attributed to someone named Gilbert Perreira was included in a webpage filled with quotations at abazoo.angelfire.com. The date on the page suggested that the quotation was recorded on September 8, 2000. Unfortunately, the retroactive modification of text and dates on webpages is quite easy and can happen inadvertently; hence, assigning a degree of confidence to this date and attribution was somewhat difficult. (But see indirect support further below):[11]Website: Angelfire Webpage Hosting, Webpage content: Growing collection of quotations, Date on website: September 8, 2000, Website description: Several webpages of quotations at Angelfire, (Accessed … Continue reading

“Be yourself. Everyone else is already taken.” – Gilbert Perreira

An instance was printed in September 2000 within a multi-page newspaper advertising supplement for a chain of stores in the Midwest called Menards. At the bottom of some pages inspirational sayings were printed; for example, these three statements were displayed:

People who do things that count, never stop to count them.
Be yourself. Everyone else is taken.
Try not to become a person of success but rather a person of value.

In April 2001 an instance attributed to Gilbert Perreira appeared in a newsgroup of the Usenet discussion system. This date was can be believed with confidence:[15]2001 April 16, Usenet discussion message, Newsgroups: mailing.postfix.users From: John Pettitt @cloudview.com, Subject: One of the more interesting spams, (Google Groups Search; Accessed January 28, … Continue reading

Be yourself. Everyone else is already taken. — Gilbert Perreira

Do not dress to look like or try to be someone else. Be yourself (everyone else is taken anyway). Be comfortable and breathe. Choose what suits you.

In 2008 a newspaper in Tucson, Arizona wrote about a set of doodles that were created and donated by celebrities. The drawings were sold in a charity auction event designed to raise money for an elementary school:[17]2008 September 4, Tribune Business News (McClatchy – Credit: The Arizona Daily Star, Tucson), The case of the lost doodles: Celebrity drawings that helped Prince School suddenly stopped … Continue reading

Current doodles include ones done by Al Pacino; “Ugly Betty” star America Ferrera, who wrote, “Be Yourself, Everyone Else Is Taken”; and a drawing of the New York City skyline done by Donald Trump.

And my favorite section of the blog is his tab called “Quote Me” where he lists some of his favorite things to say like “Be the real you because everyone else is taken and replicas don’t sell for as much.”

In conclusion, Oscar Wilde did compose several witticisms about identity and dissimulation, but none was a strong match to the quotation. Thomas Merton wrote a statement that semantically overlapped the quotation, but it was distinct. The earliest known exact match appeared in 1999, and it was anonymous. Shortly afterward it was attributed to a person named Gilbert Perreira. Perhaps more will be learned in the future.

Image Notes: Identity-Face image from geralt on Pixabay. Oscar Wilde portrait in 1882 is from Wikimedia and is in the public domain.

(Great thanks to Sydney Sprague whose email query led QI to formulate this question and perform this exploration. Thanks also to Benjamin Dreyer who tweeted two months ago that the quotation was not crafted by Oscar Wilde. Many thanks to Bodhipaksa who runs the very valuable website fakebuddhaquotes.com which carefully evaluates quotations in the spiritual domain. Bodhipaksa told QI about the intriguing Thomas Merton citation. Special thanks Terri Guillemets, creator of “The Quote Garden”, who listed several quotes by Oscar Wilde in a section called “Quotes about Being Yourself”. Appreciation to Barry Popik who sent the interesting September 8, 2000 citation to QI. Additional thanks to Michelle Lara Lin of the “Quotesome Blog” for her analysis. Further thanks to thenostromo, an Administrator at “QuoteLand”, for his analysis.)