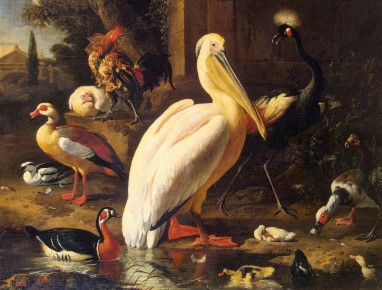 Dear Quote Investigator: A comical poem about the pelican uses a creative rhyming scheme with the word “pelican” matched to the invented words “belican” (belly can) and “helican” (hell he can). Would you please explore the provenance of this work?

It has remained for one rhymer to produce one little “piece” that saves the season from utter mediocrity. This benefactor dwells in Chicago and he has written a classic–one which merits conspicuous publication in all the high-class literary journals. The author is C. M. Marshton, one of the editors of the Chicago Record-Herald, and the “poem” was written and sent by him to relatives who were spending the winter at St. Petersburg . . .

At the risk of infringing on a copyright, the Tribune prints the masterpiece of the Florida poetry season of 1912-13. Here it is:

A gorgeous bird is the pelican,
Whose beak will hold more than his bellican.
He can put in his beak
Food enough for a week.
But I’m d—- if I see how in hellecan.

C. M. Marshton is the leading candidate for creator of this poem based on current evidence.

P Stands for Pelican
A bird whose great beak
Will hold more fish than
You could eat in a week.

On April 2, 1913 the poem appeared in “The Tampa Morning Tribune” as mentioned previously. Shortly afterward on April 6 “The Miami Herald” printed the verse with an acknowledgement. The term “hellecan” was changed to “hellican”:[3] 1913 April 6, The Miami Herald, Observations of the Oldest Inhabitant, Quote Page 2, Column 3,Miami, Florida. (Newspapers_com)

The Tampa Tribune thus sings the praises of Florida’s most unique bird:

“A gorgeous bird is the pelican.
Whose beak will hold more than his bellican.
He can put in his beak
Food enough for a week,
But I’m d—- if I see how in hellican.”

The “Nashville Banner” newspaper of Tennessee published a long-running column by Dixon Lanier Merritt called “Along the By-Paths”. The column dated April 22, 1913 included a poem about a pelican; however, Merritt disclaimed credit for the work.[5] 1913 April 22, Nashville Banner, Along the By-Paths by Dixon Merritt, Quote Page 8, Column 6, Nashville, Tennessee. (Newspapers_com)

Post card poetry doesn’t appeal much to the By-Paths but the following came from Clarksville. A gentleman received it from his best girl. It is pretty good—for Clarksville—even to have been received there. Take it for what it is worth:

On May 2, 1913 Dixon Merritt remarked that a colleague working at “The Houston Post” had reprinted the pelican poem and highlighted Merritt’s disclaimer. However, the colleague, later identified as Judd Lewis, did not believe the attribution to a “postcard poet”. Lewis insisted on ascribing the poem to Merritt:[6] 1913 May 2, Nashville Banner, Along the By-Paths by Dixon Merritt, Subsection: The Pelican, Quote Page 8, Column 6, Nashville, Tennessee. (Newspapers_com)

Until we have Dixon’s own denial we shall believe he did that, and when we meet him in Peoria we shall hold him personally responsible
—Houston Post.

Other people get credit for a good deal of the work I do. It is, therefore, only fair that I get credit for some of other people’s work. But I would like to dwell together with the brethren in peace and unity when we meet in Peoria. I never done it.

Jeff McLemore, of State Topics, is charged with saying:

Oh, a wondrous bird is the pelican!
His beak holds more than his belican.
He takes in his beak
Food enough for a week,
But I’m darned if I know how the helican.

On June 23, 1913 Merritt wrote on this topic again. He noted that credit for the limerick had been assigned to Jeff McLemore:[8] 1913 June 23, Nashville Banner, Along the By-Paths by Dixon Merritt, Quote Page 8, Column 7, Nashville, Tennessee. (Newspapers_com)

About ten days ago the report was started by an El Paso paper that the limerick was old, that it had appeared some time ago in numerous Texas newspapers and that Col. Jeff McLemore of “State Topics,” Houston, was the author.

Merritt contacting the supposedly author and learned that the attribution was faulty:

So McLemore denies authorship of the pelican limerick. I deny it. Sooner or later they will have to accept my original statement that the thing is the product of some unknown post-card poet. That may not be the truth, but nobody seems able to prove that it isn’t.

There’s a bird in the Zoo named a Pelican,
Whose mouth holds more than his Belican,
He can keep in his beak
Enough food for a week,
But I don’t see how in the Helican!

On July 21, 1913 Merritt wrote about the appearance of the poem in “Life” magazine. He comically shifted credit to “Life”, and he suggested that his colleague Judd Lewis should now criticize “Life” for concocting the verse instead of him:[10] 1913 July 21, Nashville Banner, Along the By-Paths by Dixon Merritt, Quote Page 6, Column 7, Nashville, Tennessee. (Newspapers_com)

Judd will have to chastise Life. By some sort of mischance Life was two months late in printing the thing—brought it out two months after it had been copied, with a “Nashville Banner” credit line, in a dozen papers. But it belongs to Life. And here’s hoping that Judd lays the punishment on with all the gusto that the case merits.

On August 7, 1913 Merritt returned to this topic yet again. He printed another variant of the poem as it appeared in a clipping from a Pennsylvanian newspaper, The expression “d—d” is a censored version of “damned”:[11] 1913 August 7, Nashville Banner, Along the By-Paths by Dixon Merritt, Quote Page 6, Column 7, Nashville, Tennessee. (Newspapers_com)

A gorgeous bird is the pelican,
Whose beak will hold more than his belican;
He can put in his beak
Food enough for a week,
But I’m d—d if I see how in helican.

Merritt also described in greater detail how he acquired the poem. It had been written by an unnamed woman, and Merritt had converted it into limerick form:

It came into my possession in this way: Mr. Joseph R. Wilson, then City Editor of the Banner, now an insurance magnate in Baltimore and always brother of the President, had been to Clarksville, his old home, for a visit. He brought back with him a post card which he said some Clarksville man had received from a young woman.

On the card was a picture of a pelican, with some lines written under it, one ending “pelican,” another “belican,” etc. Mr. Wilson suggested that it was good funny column material, but said that the young woman probably would not desire her name used in connection with it.

I took the thing, revamped it, put it in as nearly standard limerick form as I could and printed it.

Merritt believed that the primary originator was the woman, but he also accepted the possibility that the verse was already in circulation.

C. M. Marshton, one of the editors of the Chicago Record-Herald is the author of the now famous “pelican pome” that George Lizotte and Willis B. Powell are laying claim to.

The Tampa paper stated that Mr. Marshton’s mother and sister spent the winter In St. Petersburg, and they were fascinated by the long billed pelican. Mr. Marshton remained up north and received letters from his relatives describing the antics of the bird. The missives inspired him to compose the limerick which he wrote on a postcard and sent back to his mother and sister. An enterprising journalist working for the “St Petersburg Independent” learned about the poem and obtained permission to publish it. Next, a clipping of the verse reached the Tampa newspaper which reprinted the limerick while crediting Marshton.

A wonderful bird is the pelican;
His beak can hold more than his belican;
He can hold in his beak
Enough for a week—
But I don’t see how the helican.

In 1955 the 13th edition of “Familiar Quotations” by John Bartlett included an entry for the poem which specified a 1910 date and gave credit to Dixon Lanier Merritt. This entry was flawed because Merritt published the work in 1913, and he disclaimed authorship:[14] 1955, Familiar Quotations by John Bartlett, Thirteenth Edition, Centennial Edition, Entry: Dixon Lanier Merritt, Quote Page 904, Column 1, Macmillan and Company, London. (Verified with scans)

A wonderful bird is the pelican,
His bill will hold more than his belican.
He can take in his beak
Food enough for a week,
But I’m damned if I see how the helican.
The Pelican [1910]

The following ten limericks are the “aristocracy” of the breed—probably the most often quoted limericks of all time.

A Curious Bird Is The Pelican

This pelican’s beak may hold more than his belican, as Ogden Nash says in his poem, but he is more interested in bypassing the beak and getting a fish into his belly.

“A wonderful bird is the pelican,
“His bill will hold more than his belican.
“He can take in his beak
“Food enough for a week,
“But I’m damned if I see how the helican.”

Nine out of 10 will swear Nash wrote it or, if he didn’t, someone was stealing his stuff. The real author of that limerick is Dixon Lanier Merritt who was born in 1879. It is unlikely he was copying Nash who was only 68 when he died May 17 in Baltimore.

In conclusion, QI believes that C. M. Marshton should receive credit for the pelican poem published on April 2, 1913. During the ensuing decades many variations of the verse proliferated. Dixon Lanier Merritt published an instance on April 22, 1913, but he disclaimed credit. In modern times Merritt and Ogden Nash have often received credit incorrectly.

Image Notes: Painting of “Birds in a Park” by Melchior d’Hondecoeter circa 1686 accessed via wikiart.org. Image has been cropped and resized.

(Many thanks to Bill Mullins who located the crucial citation dated April 2, 1913. Special thanks to Chaz Foote who suggested that the article should mention the popular misattribution to Ogden Nash.)