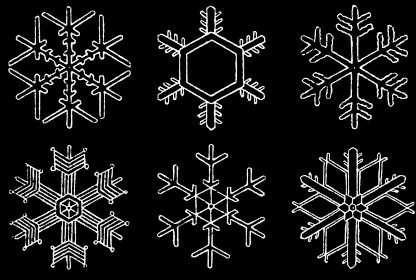 Dear Quote Investigator: A mob or a mass movement can cause enormous destruction. Also, the inaction of a large apathetic group in a perilous time can lead to ruination. Yet, individuals disavow liability. Here are three versions of a pertinent metaphorical adage:

This saying has been attributed to French wit Voltaire, Polish aphorist Stanisław Jerzy Lec, U.S. comedian George Burns, and others. Would you please explore this topic?

It is the high priests that make demands—not the gods they serve.
No snowflake in an avalanche ever feels responsible.
Do not trust people. They are capable of greatness.

This book was translated from Polish by Jacek Galazka. Some sources have suggested that the Polish source book was titled “Myśli Nieuczesane Nowe” (“Unkempt New Thoughts”); however, QI has corresponded with two individuals who have carefully examined 1964 and 1966 editions of that book and determined that the quotation was absent. Thus, the identity of the Polish source book for the quotation remains uncertain.[2]Personal communication via twitter between Garson O’Toole (@QuoteResearch) and FranekVetulani (@FranekVetulani) on May 29, 2022; Also, personal communication via twitter between Garson O’Toole … Continue reading

A volunteer editor at the crowdsourced website Wikiquote suggested that the following was the original Polish quotation, but QI has not yet verified this claim, and this quotation may be inaccurate:[3]Website: Wikiquote, Person: Stanisław Jerzy Lec, A Wikimedia Project of Wikimedia Foundation, Inc. (Accessed wikiquote.org on April 26, 2022; Polish version of the quotation was obtained from … Continue reading

In 1837 “The Birmingham Journal” of England published a piece by a political activist who employed an analogy depicting individuals as snowflakes able to unite to form a powerful avalanche:[4] 1837 May 13, The Birmingham Journal, To the Wealth Producers of Birmingham and of the Midland Counties by Jack Steadfast, Quote Page 7, Column 4, Warwickshire, England. (British Newspaper Archive)

The avalanche of the Alps, which carries destruction in its gathering force, and whelms whole districts in its frozen shroud, acquired its tremendous force by UNION—the vast mass of cold destruction was accumulated flake by flake. Compare this figure yourselves—ye are the snow-flakes; gather then instruction from nature, single flakes form the avalanche, single grains of sand form mountains, single drops form the mighty ocean, and supply its resistless power!

Awful as silence. Hark! the rushing snow!
The sun-awakened avalanche! whose mass,
Thrice sifted by the storm, had gathered there
Flake after flake, in heaven-defying minds
As thought by thought is piled, till some great truth
Is loosened, and the nations echo round,
Shaken to their roots, as do the mountains now.

“Thoughts, like snow-flakes on some far-off mountain-side, go on accumulating till some great truth is loosened, and falls like an avalanche on the waiting world.”

In an avalanche, no one snowflake ever feels responsible.

In February 1964 the saying appeared in a Chillicothe, Missouri newspaper within a collection of quotations compiled by students at the local high school. The odd attribution might be a garbled version of the name “Stanislaw Lec”:[8] 1964 February 21, The Chillicothe Constitution-Tribune, Chilli Chatter by Chillicothe High School Student Council, Quotes, Quote Page 4, Column 3, Chillicothe, Missouri. (Newspapers_com)

No snowflake in an avalanche ever feels responsible.
—Etaislaw Lee.

No snowflake in an avalanche ever feels responsible.

Each snowflake in an avalanche pleads not guilty.
—Stanislaw J. Lec

REMEMBERED QUOTE: “Each snowflake in an avalanche pleads not guilty.”—Stanislaw J. Lee.

No snowflake in an avalanche ever feels responsible.
—Stanislaus Leszczynski

The snowflake “No snowflake in an avalanche ever feels responsible.” Voltaire (1694-1778)

No snowflake in an avalanche ever feels responsible. — George Burns

In conclusion, this saying should probably be credited to Stanisław Jerzy Lec based on the translation published in “More Unkempt Thoughts” in 1968. The original Polish statement has not yet been precisely located by QI. The ascriptions to Voltaire and Stanisław Leszczyński are unsupported. The attribution to George Burns occurred after the saying was in circulation.

Image Notes: Public domain illustration of snowflakes from “The Century Dictionary” of 1895. Image has been resized and cropped.

(Great thanks to the anonymous friend whose inquiry led QI to formulate this question and perform this exploration. Special thanks to Szescstopni and Franek Vetulani  who examined the 1964 and 1966 editions of “Myśli Nieuczesane Nowe” and were unable to find the quotation.)

Update History: On May 30, 2022 the article was rewritten based on the absence of the quotation in “Myśli Nieuczesane Nowe”.