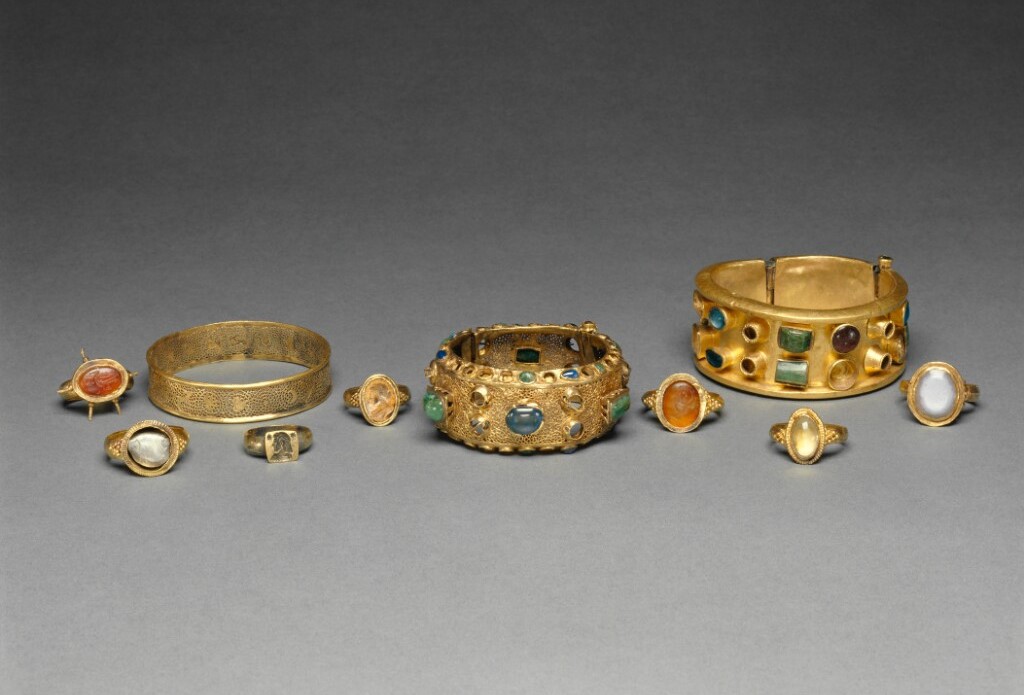 Question for Quote Investigator: Fashion sense is always subjective, but many agree that wearing too much jewelry looks gaudy and ostentatious. The style maven Coco Chanel supposedly gave the following advice about adornments. Here are two versions:

(1) Always remove one piece of jewelry before you go out.

(2) Before you leave the house, look at yourself in the mirror and take one thing off.

Thus, this difficult choice requires second-guessing yourself. This adage has also been attributed to two comedians: Gracie Allen and Joan Rivers. I have been unable to find solid evidence. Would you please explore this saying’s provenance?

Reply from Quote Investigator: This saying is difficult to trace because it can be expressed in many ways. The earliest match known to QI appeared in “The American University Eagle” newspaper of Washington D.C. in 1949 which reprinted fashion advice from the “Daily Lass-o” of the Texas State College for Women. Boldface added to excerpts by QI:[1]1949 February 16, The American University Eagle, Texas Tips For Ladies, Quote Page 4, Column 3, Washington D.C. (Illinois Digital Newspaper Collections at idnc.library.illinois.edu; accessed February … Continue reading

“Lastly, never wear too much jewelry, no matter how well it all matches. An old policy, but still a very good one, is after you have completely finished dressing, step away from the mirror and get a good full length view of yourself, then remove one piece of jewelry and you will look much smarter.”

The phrase “old policy” signaled that this advice was a preexisting adage. The originator remains anonymous. Several famous people have referenced this saying, but QI has found no substantive support for the ascription to Coco Chanel. Comedian George Burns stated that his wife, Gracie Allen, adhered to the adage. Also, Joan Rivers referred to the saying, but she attributed it to her mother.

Additional detailed information about this fashion proverb is available on the Medium website which is available here.

Image Notes: Picture of jewelry from unknown maker circa A.D. 250-400. Public domain image from the Getty Museum in Los Angeles, California. Image has been resized and cropped.

Acknowledgements: Great thanks to Noah Brier, Craig Good, and Flip Phillips whose inquiries and comments led QI to formulate this question and perform this exploration. Many thanks to Simon Koppel who located the important 1949 citation and shared it with QI.

Who or What Was Caustic? The Little Foxes? Jim Tully? An Unnamed Actor? Mr. Rosenblatt? An Unnamed Script? An Unnamed Writer? Sidney Howard? Moss Hart?

Dear Quote Investigator: An entertaining legend about the powerful movie mogul Samuel Goldwyn has been amusing people for decades. “The Little Foxes” was a major Broadway hit in 1939 and Goldwyn was considering purchasing the rights to create a film based on the story. He asked his top advisor to see the play and report to him. Here is what the aide supposedly told Goldwyn together with his reply:

This is my favorite anecdote about Goldwyn, and it is supported by the fact that he did buy the rights and made a classic movie starring Bette Davis. Could you research this quotation?

Quote Investigator:Thanks for sending in this fun story. Unfortunately, there is a problem with the timeline that makes this tale unlikely. In January 1930 the widely-syndicated columnist Walter Winchell reported a version of the joke based on the misconstrual of the word “caustic” that was being disseminated by the popular humorist and actor Robert Benchley. Thus, the core joke was in circulation about nine years before the premiere of “The Little Foxes”.

The tale centered on two movie magnates who began their careers in the garment business. This biographical detail matched Samuel Goldwyn who was a glove salesman before moving to Hollywood. The maladroit line was spoken by one of the magnates. Boldface has been added to excerpts:[1] 1930 January 9, The Scranton Republican, On Broadway by Walter Winchell, Quote Page 5, Column 2, Scranton, Pennsylvania. (Newspapers_com)

They were in conference trying to save a new picture that lacked, what critics usually call, “a wallop.”
“If we could only get someone to fix it up,” said one.
“Why don’t you get Jim Tully?” suggested an executive.
“Jim Tully is too caustic!”
“Oh,” thundered one of the magnates, “the hell with the cost, get him!”

The writer Robert Benchley constructed many humorous stories, and it was possible that he simply invented this anecdote to entertain friends. Alternatively, he may have been present at a meeting when the line was spoken. Special thanks to ace researcher Bill Mullins who located the citation given above.

Here are some additional citations in chronological order.