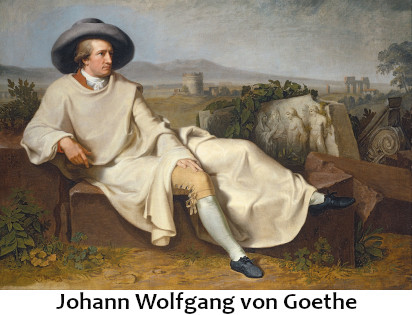 Dear Quote Investigator: Sometimes a truthful statement can undermine a cherished belief and provide comfort to an adversary. Thus, it is tempting to embrace an untruthful statement that provides temporary solace. Yet, accepting uncomfortable truths leads to personal growth, whereas accepting errors and lies fails terribly over time. Here are three instances from a family of sayings:

These expressions have been attributed to two prominent German literary figures Johann Wolfgang von Goethe and Thomas Mann. Would you please explore this topic?

Translator Heinz Norden rendered the above passage into English for the book “Goethe’s World View” in 1963:[2]1963, Goethe’s World View: Presented in His Reflections and Maxims by Johann Wolfgang von Goethe, Edited with an Introduction by Frederick Ungar, Translated by Heinz Norden, (Untitled passage), … Continue reading

Nothing is great but truth, and the smallest truth is great. The other day I had a thought, which I put like this: Even a harmful truth is useful, for it can be harmful only for the moment and will lead to other truths, which must always become useful, very much so. Conversely, even a useful error is harmful, for it can be useful only for the moment, enticing us into other errors, which become more and more harmful.

I prefer an injurious truth to a useful error.
Truth heals any pain it may inflict on us.

END_OF_DOCUMENT_TOKEN_TO_BE_REPLACED

In the following passage, Forster attributed the saying under examination to an old lady in an anecdote. The phrase “distinguished critic” was a humorous reference to the old lady:[2] 1927 Copyright, Aspects Of The Novel by E. M. Forster, Chapter 5: The Plot, Quote Page 152, Harcourt, Brace and Company, New York. (Verified with scans)

END_OF_DOCUMENT_TOKEN_TO_BE_REPLACED

I have been unable to find a solid citation for Gide. This remark has also been ascribed to the U.S. foreign-policy advisor McGeorge Bundy. Would you please help?

“Gray,” says M. de Biez again, “which is the color of the sky in France, is also the color of truth itself, of that truth which tempers the impetuosity of enthusiasm and restrains the spirit within the middle spheres of precise reason.” Nothing could more accurately attest the French feeling in regard to color—the French distrust of its riotous potentialities.

QI has not yet found substantive evidence supporting the attribution to André Gide. McGeorge Bundy did use the line in a speech in 1967. The spellings “gray”, “grey”, “color”, and “colour” have all appeared over the years. This adage has been difficult to trace and the earlier citations may be discovered by future researchers.

Below are additional selected citations in chronological order. END_OF_DOCUMENT_TOKEN_TO_BE_REPLACED

Dear Quote Investigator: There is a provocative saying about leadership, discipleship, and the search for truth that is commonly attributed to the Czech statesman Václav Havel who passed away in 2011. Here are two versions:

Seek the company of those who search for truth; run from those who have found it.

Although I have connected these statements to Havel for years I recently began to doubt the ascription. I have been unable locate solid information about its provenance. Would you be willing to attempt to trace this saying?

Quote Investigator: A large and diverse set of expressions can be grouped together naturally with the two sayings presented by the questioner. Below are nine examples labeled with their years of publication. This exploration was conducted primarily using databases of English text, hence it was incomplete. Only the keystone first expression from Nobel laureate André Gide is listed here in French:

1959: Believe those who are seeking the truth; doubt those who find it.

1971: Love those who seek the truth; beware of those who find it.

1974: Love those who seek the truth; distrust those who have found it.

1980: Follow the man who seeks the truth. Shun the one who claims to have found it.

1986: Lead me to those who seek the truth, and deliver me from those who’ve found it.

2009: Honour those who seek the truth, but beware of those who’ve found it.

In 1952 “Ainsi Soit-Il, Ou Les Jeux Sont Faits” by André Gide was released in France. The title in English was “So Be It: Or The Chips Are Down”. The following statement was included in the book:[1]1953 October, The French Review, Volume 27, Number 1, André Gide-deux ans après sa mort, II by Lucien Wolff, Start Page 6, Quote Page 8, Published by American Association of Teachers of French. … Continue reading

In 1959 a translation of Gide’s volume to English by Justin O’Brien was created. Here is an extended excerpt. Boldface has been added to the excerpts below. In this passage the boldface corresponds to the French text immediately above:[2]1959 copyright (1960 edition), So Be It: Or The Chips Are Down (Ainsi Soit-Il, Ou Les Jeux Sont Faits) by André Gide, Translated from French to English by Justin O’Brien, Quote Page 146, … Continue reading

I resist giving advice; and in a discussion I beat a hasty retreat. But I know that today many seek their way gropingly and don’t know in whom to trust. To them I say: believe those who are seeking the truth; doubt those who find it; doubt everything, but don’t doubt of yourself. There is more light in Christ’s words than in any other human word. This is not enough, it seems, to be a Christian: in addition, one must believe. Well, I do not believe. Having said this, I am your brother.

QI hypothesizes that the other eight statements above were derived directly or indirectly from the words of Gide. The second statement labeled 1959 is simply the translation created by O’Brien.