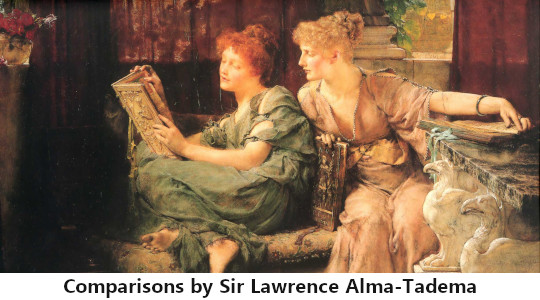 Dear Quote Investigator: Comparing your status to others often produces envy and unhappiness. Here are four instances from a family of pertinent adages:

Statesman Theodore Roosevelt, humorist Mark Twain, author C. S. Lewis, and religious figure Dwight Edwards have all been given credit for sayings in this family. Would you please explore this topic?

Quote investigator: QI has located no substantive evidence supporting ascriptions to Theodore Roosevelt, Mark Twain, and C. S. Lewis. Tracing this family is difficult, and this article presents a snapshot of current research. The statements above are not semantically identical, but QI believes that this grouping is natural.

The earliest match located by QI appeared in the 1989 book “Happiness Is an Inside Job” by John Powell. This instance referred to self-contentment and not joy. Boldface added to excerpts by QI: 1

“Why can’t you be like that. ” “Why don’t you do as well as your brother?” “If you comb your hair down, people won’t notice your big forehead. You’ll look more presentable.”

And so most of us have been taught to compare ourselves with others. And all the professionals agree: Comparison is the death of true self-contentment.

The earliest match using “comparison” and “thief of joy” located by QI appeared in the 2003 religious book “Are You Following Jesus Or Just Fooling Around?!” by Dr. Ray Cummings. He discussed three thieves of joy. The first thief was bitterness; the second thief was complaining, and the third thief was comparison: 2

A third thief of joy is comparison. When Satan can’t make you bitter enough to complain, he will seek to lower your self-esteem and allow you to compare.

The 2004 religious book “Connect2God: Instant Messages from God to Teens” by Curt Cloninger included an exact match for the popular modern version of the saying. Cloninger disclaimed credit: 3

Somebody once said that comparison is the thief of joy. In other words, if you’re always comparing yourself to other people, then you’ll never be happy.

END_OF_DOCUMENT_TOKEN_TO_BE_REPLACED

Dear Quote Investigator: Tyrannical systems are often created by people who believe that they have the highest and noblest intentions. Totalitarian countries, theocratic dictatorships, and abusive cults are typically founded and promoted by those who are convinced that their actions will benefit humankind. Here is a pertinent adage about self-deception and fallibility:

Most of the evil in this world is done by people with good intentions.

The above statement has been attributed to the famous poet and playwright T.S. Eliot, but I have never seen a solid citation. Would you please explore this topic?

Quote Investigator: There is no evidence that T. S. Eliot wrote or spoke the statement above. On the other hand, he did write two thematically related remarks which are presented further below.

The viewpoint of the adage can be expressed in many different ways which makes it very difficult to trace. A match occurred in 1914 within a trade journal called “The Creamery and Milk Plant Monthly”. A section presenting miscellaneous news stories included a short item discussing milk pasteurization. The anonymous author of the item wrote the following. Boldface added to excerpts by QI: 1

But the fact is, that the greatest harm in the world has been done by people with good intentions. The bad ones seldom have power enough to do great harm.

END_OF_DOCUMENT_TOKEN_TO_BE_REPLACED

Quote Investigator: The earliest match known to QI appeared in the 1926 book “The Art of Thought” by Graham Wallas who was Professor Emeritus of Political Science at the University of London. Wallas suggested that the processes of thinking and expressing were entangled for the poet because the precise selection of words was crucial to success. Wallas attributed the saying under examination to an anonymous young girl. Boldface added to excerpts by QI: 1

In the following passage, Forster attributed the saying under examination to an old lady in an anecdote. The phrase “distinguished critic” was a humorous reference to the old lady: 2

END_OF_DOCUMENT_TOKEN_TO_BE_REPLACED

Dear Quote Investigator: The prominent American editor, writer, and educator Toni Morrison who authored the Pulitzer Prize-winning novel “Beloved” has been credited with an exhilarating remark about the creative process:

If there’s a book you really want to read, but it hasn’t been written yet, then you must write it.

I have not been able to find a citation. Would you please help?

Quote Investigator: In 1981 Toni Morrison spoke at the annual meeting of the Ohio Arts Council, and “The Cincinnati Enquirer” reported some of her comments. Emphasis added to excerpts by QI: 1

“Writing to me is an advanced and slow form of reading. If you find a book you really want to read but it hasn’t been written yet, then you must write it.

“It took me a long time to do a short book; a long time to leave the world of language and the building up and shaping of the book, but once it began to float I knew I could not not do it . . .

Morrison’s original phrasing differed slightly from the popular modern version of the quotation.

END_OF_DOCUMENT_TOKEN_TO_BE_REPLACED

Dear Quote Investigator: The famous fantasy author C. S. Lewis has been credited with an encouraging statement aimed at seniors:

You are never too old to set another goal or to dream a new dream.

I haven’t been able to find a citation. Is this ascription accurate?

The first match found by QI occurred in the 1992 book “Live Your Dreams” by the motivational speaker and author Les Brown within a section titled “Never Too Old to Be Bold”. Emphasis added to excerpts by QI: 1

And please note this: You are never too old to set another goal or to dream a new dream. A gentleman nearing retirement age once approached me after I’d given a speech to his corporation. He said, “You know, that was real great motivation for the young guys, but I’ve done all my work. There is nothing else for me to do.”

I replied, “Oh yes, you have a lot to give. The fact that you are still here on this planet means that your business is NOT DONE.”

END_OF_DOCUMENT_TOKEN_TO_BE_REPLACED

Dear Quote Investigator: The famous English lexicographer Samuel Johnson apparently extolled domestic bliss. Did he write or say something like the following?

The chief aim of all human endeavors is to be happy at home.

Quote Investigator: In 1746 Samuel Johnson signed a contract to create “A Dictionary of the English Language”, and in 1755 the remarkable two volume product of his prodigious efforts appeared. He worked on other projects during this busy period including a periodical called “The Rambler”. His essay dated November 10, 1750 highlighted the importance of home life: 1

To be happy at home is the ultimate result of all ambition, the end to which every enterprise and labour tends, and of which every desire prompts the prosecution.