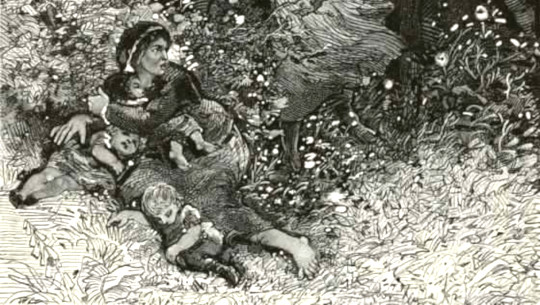 Dear Quote Investigator: The famous French novelist Victor Hugo penned a vignette about a mother who selflessly gave food to her hungry children even though she was emaciated. An observer asked why she did this, and another observer replied: “Because she is a mother”. Would you please help me to find this passage?

Quote Investigator: Victor Hugo’s 1874 novel “Quatrevingt-Treize” (“Ninety-Three”) explored the counter-revolutionary revolts which occurred during the period of the French Revolution. A scene near the beginning of the book depicted a group of military men who encountered a woman with her baby and her two young children who were all starving. The following passage is presented in the original French. Boldface added to excerpts by QI: 1

Hugo’s work was translated into English and published in the same year of 1874. Here is the rendered passage: 2

The sergeant took a bit of regulation bread from his pocket, and handed it to the mother. She broke the bread into two fragments, and gave them to the children, who ate with avidity.
“She has kept none for herself,” grumbled the sergeant.
“Because she is not hungry,” said a soldier.
“Because she is a mother,” said the sergeant.

END_OF_DOCUMENT_TOKEN_TO_BE_REPLACED

Dear Quote Investigator: I am authoring a book that discusses marble, and I’ve found an apposite quotation ascribed to the French literary titan Victor Hugo author of “Les Misérables” and “The Hunchback of Notre-Dame”. He employed antimetabole while comparing marble to human flesh. I have not been able to find solid citations in French or English. Would you be willing to help?

Quote Investigator: When Victor Hugo died in 1885 he left his heirs with a bulky copy-book entitled “Post-Scriptum de Ma Vie” (“A Postscript to My Life”). In 1901 a posthumous book emerged, and one section contained a collection of brief miscellaneous thoughts. Here were four in the original French. Emphasis added to excerpts by QI: 1

Publication of an English translation occurred in 1907 under the title “Victor Hugo’s Intellectual Autobiography: Being the Last of the Unpublished Works and Embodying the Author’s Ideas on Literature, Philosophy and Religion”. Here were the four thoughts above rendered in English: 2

Dear God! how beauty varies in nature and art. In a woman the flesh must be like marble; in a statue the marble must be like flesh.

The wicked envy and hate; it is their way of admiring.

The learned man knows that he is ignorant.

By putting forward the hands of the clock you shall not advance the hour.

END_OF_DOCUMENT_TOKEN_TO_BE_REPLACED

Dear Quote Investigator: Melancholy is a complex and sometimes puzzling emotion. The composite nature of the sensation is expressed by the following:

I believe that this statement was crafted by a prominent author, but I cannot remember his or her name. Would you please help?

Quote Investigator: In 1866 the major French literary figure Victor Hugo published “Les Travailleurs de la Mer” which was later released under the English title “The Toilers of the Sea”. This work included the saying under investigation. Here is an excerpt in French followed by a translation from 1888. Boldface has been added to excerpts: 1 2

Despair has ascending degrees. From prostration one mounts to despondency, from despondency to affliction, from affliction to melancholy. Melancholy is a twilight. Suffering melts into it in sombre joy.
Melancholy is the happiness of being sad.

END_OF_DOCUMENT_TOKEN_TO_BE_REPLACED

Dear Quote Investigator: There is a popular humorous anecdote about an exchange of letters between Victor Hugo and his publisher shortly after the publication of “Les Misérables”. Each message consisted of only a single character. Are you familiar with this story? Recently, I heard a version of the tale with Oscar Wilde replacing Victor Hugo. Would you explore this topic?

Quote Investigator: The novel “Les Misérables” was published in 1862, and the earliest instance of the Hugo anecdote known to QI appeared in 1892. Details for this citation are given further below. However, the thirty year delay casts doubt on the story. The connection to Oscar Wilde appeared much later.

A similar tale about the exchange of extraordinarily concise messages was printed four decades earlier in April 1850 in “The Nottinghamshire Guardian” paper in Nottinghamshire, England: 1

In the briefest correspondence known, only two figures were used, the first contained a note of interrogation (?), implying “Is there any news?” The answer was a cipher (0), “None.”

After presenting the item above, a different complementary story was told about a message painted on a chimney:

This was clever; but neighbour Shuttleworth, in Nottingham Market Place, beats it. He has on his chimney two large T’s, one painted black the other green, to intimate that he sells black and green tea.

END_OF_DOCUMENT_TOKEN_TO_BE_REPLACED

Dear Quote Investigator: Some individuals change their political orientation as they grow older. There is a family of sayings that present a mordant judgment on this ideological evolution. Here are three examples:

Political terminology has changed over time, and it differs in distinct locales. Within the context of these sayings the terms “républicain”, “socialist”, and “liberal” were all on the left of the political spectrum. Would you please explore this complex topic?

Quote Investigator: The earliest strong match known to QI appeared in a history book titled “Histoire de la Révolution de 1870-71” by French literary figure Jules Claretie. The book included a reprint of a public 1872 letter from academic and politician Anselme Polycarpe Batbie who employed the saying. Interestingly, Batbie, credited the remark to “Burke”. Below is an excerpt in French followed by an English translation. Boldface has been added: 1

Several of my friends urged me to respond with Burke’s famous line: “Anyone who is not a republican at twenty casts doubt on the generosity of his soul; but he who, after thirty years, perseveres, casts doubt on the soundness of his mind.”

Batbie was probably referring to the statesman Edmund Burke who was noted for his support of the American Revolution and his later condemnation of the French Revolution. However, QI has not located the quotation under investigation in the writings of Burke. Anselme Batbie lived between 1828 and 1887.