Dear Quote Investigator: The prominent poet Robert Frost did not compose free verse. Instead, he welcomed the structural demands of rhyme and meter. To explicate his choice he used a clever and vivid simile from the domain of tennis. Would you please help me to find a citation?

Quote investigator: The earliest match located by QI appeared in February 1933 within a report published by “The Scranton Times” of Scranton, Pennsylvania. Frost spoke to a capacity audience at the local Century Club, and he employed two similes when discussing free verse. Poems written in free verse are not required to follow a regular meter or a rhyming scheme. Boldface added to excerpts by QI: 1

Mr. Frost read a number of his own poems and quite captivated the audience by his charming personality and sincerity . . .

He likened free verse, which he said he never writes, to playing tennis without a net or handball without a wall. He likes blank verse and frequently uses it in his writings.

A net and a wall provide crucial constraints on the athletic activities of tennis and handball. Similarly, rhyme and meter provide constraints on poems. Yet, Frost’s viewpoint was not rigid regarding rhyme. For example, his popular poem “Birches” was written in blank verse, specifically unrhymed iambic pentameter.

END_OF_DOCUMENT_TOKEN_TO_BE_REPLACED

Dear Quote Investigator: A poem about the need to maintain aspirational dreams employed a vivid metaphor based on a bird with a damaged wing. The author was Langston Hughes or Robert Frost. Would you please help me to find a citation?

Quote Investigator: In 1932 Langston Hughes published the collection “The Dream Keeper and Other Poems”. 1 The book included “Dreams” which consisted of eight lines split into two verses. “The Anniston Star” of Alabama reprinted the work on October 2, 1932. These were the first four lines: 2

Hold fast to dreams
For if dreams die
Life is a broken-winged bird
That cannot fly.

END_OF_DOCUMENT_TOKEN_TO_BE_REPLACED 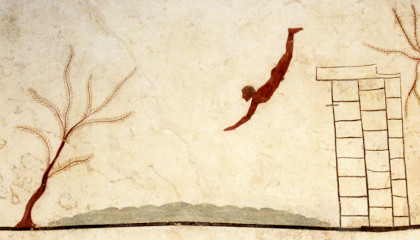 END_OF_DOCUMENT_TOKEN_TO_BE_REPLACED

Dear Quote Investigator: While listening to a TEDx talk I heard an interesting motivational quotation attributed to the popular American poet Robert Frost:

Don’t aim for success if that’s what you want. Do what you love and believe in, and it will follow.

I doubt that the versifier of rural life said this, and I have been unable to locate a citation. Would you please help trace this statement?

Quote Investigator: QI has found no substantive evidence that Robert Frost employed this saying. The linkage was probably caused by confusion with another person whose last name was Frost.

In 1985 a columnist in the “Courier-Post” of Camden, New Jersey published a multiple-choice quiz asking readers to identify the creators of various quotations. The answer section stated that television host and journalist David Frost authored the following. Emphasis added to excerpts by QI: 1

“I think success is a crappy, trendy word. Don’t aim for success if you want it. Just do what you love doing and it will come naturally.”

END_OF_DOCUMENT_TOKEN_TO_BE_REPLACED

Dear Quote Investigator: The acclaimed American poet Robert Frost was asked as an octogenarian what he had learned about life, and he succinctly replied: It goes on.

I have been unable to find a contemporaneous citation, and a popular quotation website says that the attribution is disputed. What do you think?

Quote Investigator: Robert Frost did utter this proverbial wisdom during his eightieth birthday celebration according to journalist and self-help writer Ray Josephs. In September 1954 the Sunday newspaper supplement “This Week Magazine” published “Robert Frost’s Secret” by Josephs which included the following exchange. Ellipses were in the original text. Emphasis added to excerpts by QI: 1

“In all your years and all your travels,” I asked, “what do you think is the most important thing you’ve learned about life?”

He paused a moment, then with the twinkle sparkling under those brambly eyebrows he replied: “In three words, I can sum up everything I’ve learned about life. It goes on. In all the confusions of today, with all our troubles . . . with politicians and people slinging the word fear around, all of us become discouraged . . . tempted to say this is the end, the finish. But life — it goes on. It always has. It always will. Don’t forget that.

END_OF_DOCUMENT_TOKEN_TO_BE_REPLACED

Quote Investigator: The earliest evidence known to QI appeared in the London periodical “New Statesman” in 1962. The musician and critic George Melly attributed the saying to the notable playwright George Bernard Shaw. Emphasis added by QI: 1

END_OF_DOCUMENT_TOKEN_TO_BE_REPLACED

Would you please help me find citations for these expressions?

Quote Investigator: In 1958 Robert Frost spoke the first statement according to his friend Louis Untermeyer. In addition, Isaac Asimov wrote a sentence that closely matched the second sentence in 1974. Full citations are given further below.

Before Frost or Asimov shared their opinions, a high school teacher named Charles Swain Thomas made a similar remark as reported in “The Indianapolis Star” in 1913. Thomas who later became a professor in the Harvard Graduate School of Education addressed the Marion County Teachers’ Institute in Indiana. Boldface has been added to excerpts: 1

The only kind of education worth while is self-education, Mr. Thomas said in his morning lecture, “The good work for all education is interest. Until there is interest there is no response.”

END_OF_DOCUMENT_TOKEN_TO_BE_REPLACED

Dear Quote Investigator: The prominent poet Robert Frost thought that pursuing activities with an unremitting frenetic pace was unwise; periods of relaxation and leisure were indispensable. He has been credited with a passage that begins:

There’s absolutely no reason for being rushed along with the rush. Everybody should be free to go very slow.

Quote Investigator: In January 1954 “The Atlanta Constitution” of Atlanta, Georgia published an interview with Robert Frost who was in the local area because he was planning to give a talk at Agnes Scott College of Decatur, Georgia. Boldface has been added to excerpts: 1

“There’s absolutely no reason for being rushed along with the rush,” the venerable poet said yesterday, lounging easily in the Agnes Scott library between speaking engagements. “Everybody should be free to be very slow. I never know when I’m wasting time.”

The quotation above differed slightly from the common modern rendition because it contained “free to be very slow” instead of “free to go very slow”. Frost continued by presenting some thoughts about his writing process:

“You see I don’t know when I’m thinking. It may be when I’m just sitting around and it may be when I’m working. But what difference does it make? What you want, what you’re hanging around in the world waiting for is for something to occur to you.”

Frost further stated that he composed his poetry in his head while walking and wrote it down at night while sitting in an easy chair.

END_OF_DOCUMENT_TOKEN_TO_BE_REPLACED

Dear Quote Investigator: An enigmatic metaphorical statement about freedom has been attributed to the famous American poet Robert Frost:

You have freedom when you’re easy in your harness.

Are these really the words of Frost? What was the context? Would you please examine this topic?

Quote Investigator: Robert Frost held a news conference on the eve of his eightieth birthday in 1954. An article from the Associated Press (AP) news service described some of the questions and answers which included remarks about freedom. Boldface has been added to excerpts: 1

“I find my greatest freedom on the farm,” the four-times Pulitzer Prize winner said. “I can be a bad farmer or a lazy farmer and it’s my own business.” He lives on a farm in Ripton, Vt.

What’s your definition of freedom, he was asked.

“It’s being easy in your harness,” he replied, slipping into rural vernacular.

Frost suggested that some form of constraint was inherent in his notion of freedom. The reader must provide his or her own interpretation.

END_OF_DOCUMENT_TOKEN_TO_BE_REPLACED

Dear Quote Investigator: It is remarkably difficult to obtain a loan in a difficult economic climate. This notion can be expressed with the following adage:

A banker is a fellow who lends you his umbrella when the sun is shining, but wants it back the minute it begins to rain.

Mark Twain is sometimes credited with this remark, but I know that means little. It seems every clever remark is eventually attributed to Twain. Could you figure out who really said it?

Quote Investigator: You are correct to doubt the ascription of the saying to Mark Twain. The invaluable TwainQuotes website of Barbara Schmidt has a webpage dedicated to this adage with the following warning notice: 1

This quote has been attributed to Mark Twain, but until the attribution can be verified, the quote should not be regarded as authentic.

1905 is the date of the earliest citation found by QI expressing the kernel of the idea in the maxim. The following words were published in a London-based weekly for chartered accountants: 2

A customer who was not getting what he wanted, once said to me: “You bankers only lend a man an umbrella when it is a fine day,” and I thought he expressed it exactly.

A version very similar to the questioner’s expression appeared in January 1930. The first cite found by QI attributing the remark to Mark Twain is dated 1944. In 1949 the adage was credited to the famous poet Robert Frost.